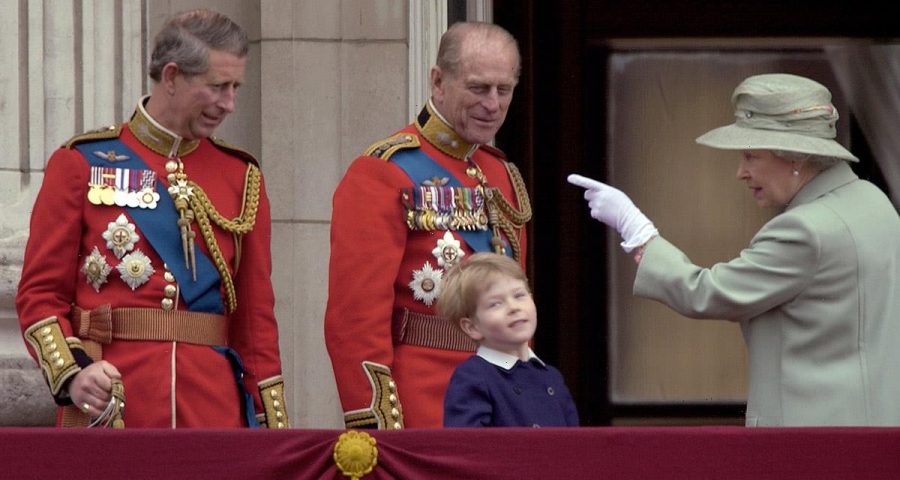 They are some of the most dignified people in public, always keeping their cool and remaining professional in front of the cameras.

But sometimes, members of the royal family can’t help but show they’re only human, and now and again they are even seen losing their temper – whether they’ve been pushed too far by their children or grandchildren, or when the press pack tests their patience in the case of Prince Philip!

We’re taking a look back at some of the royal family’s more irritable moments, and see how they managed to control the situation while dozens of flashbulbs went off.

Prince William had a right telling off from his grandmother the Queen during her birthday celebrations, Trooping the Colour, in 2016. As the family made an appearance on the balcony of Buckingham Palace, William bent down to have a chat with little Prince George, but Her Majesty was not impressed. Clearly aware of the fact that thousands of eyes were on them, she appeared to tell her grandson to stand up. And William didn’t waste any time in following granny’s orders!

WATCH: When royals invite us inside their luxury homes…

Kate was on doting mummy duty at her sister Pippa Middleton’s wedding in 2017, but there was one incident when she had to have a few cross words with her son Prince George.

The cheeky youngster was spotted playing behind his aunt’s wedding dress and shaking out his flower basket before Kate, who also had her hands full with Princess Charlotte, gave him a quick talking to. George briefly shed some tears after he was scolded but quickly perked up! Kids hey!

It all became a bit too much for Princess Charlotte as the Cambridges prepared to board a helicopter in Hamburg. Kate was seen giving her daughter a gentle scold as the then two-year-old burst into tears.

MORE: 10 of the most lavish gifts Kate Middleton has received from the royal family

Savannah Phillips was scolded by her mum Autumn during the royals’ day out at the polo in June 2018. The little girl, then seven, jokingly pushed her cousin Prince George down a hill, leaving him in shock and a bit tearful.

The Duke of Cambridge has previously opened up about another time Her Majesty told him off, recalling the incident as a child.

Speaking during documentary The Queen at 90, William explained: "[Peter Phillips and I] were chasing Zara around who was on a go-cart, and [we] managed to herd Zara into a lamppost and the lamppost came down and nearly squashed her.

And I remember my grandmother being the first person out at Balmoral to come running across the lawn in her kilt. She came charging over and gave us the most almighty telling off, and that sort of stuck in my mind from that moment on."

During a photocall in 2015, Prince Philip lost his patience as he swore at a group of cameramen and told them: “Just take the [expletive] picture!” The Queen’s late husband repeatedly said “Just take it,” prompting his family, including Prince William, to stifle their laughter.

The royals were attending a photocall at the RAF Club to commemorate the 75th anniversary of the start of the Battle of Britain.

In his typical no-nonsense matter, Prince Philip gestured to a driver to tell him to hurry up as the Duke and his wife were driven around in the open-top Queenmobile.

Philip got fed up of the slow-moving car, while his wife, who was celebrating her 90th birthday, enjoyed waving to the crowds.

Social media went crazy when a video of the Queen and Princess Anne went viral after the Nato reception at Buckingham Palace in December 2019. In the clip, it looked like the monarch was chastising her daughter in front of the US President Donald Trump, but in fact Anne was standing back, because she was not part of the welcome party.

When the Queen looked to see who was next in line to be greeted, Anne raised her hands in the air, laughed and said: "It's just me, and this lot" pointing to members of the household behind her. Twitter went alight after some mistook Anne's gesture for her not wanting to greet President Trump.

MORE: When royals pack on the PDA in public – see the photos

When Prince Harry attended the Sentebale Polo Cup in Italy in May 2019, just weeks after welcoming baby Archie, he couldn't help let his feelings be known about the use of plastic.

His friend and professional polo player Nacho Figueras told CBS This Morning: "We were at the hotel where we spent the night before the game. He talked to a person and said, 'This morning I got my coffee and I saw that you have a plastic thing on the coffee. And then I also sent my shirt and I got my shirt in a big plastic bag. Can we please not use plastic?'"

Nacho added: "So that's this guy, okay. I don't like to talk about that at all, that's who he is. That's who they are. No plastic." TV presenter Gayle King replied: "They're trying to make the world a better place, every day."

Nacho had previously defended the royal in another interview and on Instagram, saying the world didn't know the real Harry. "The world thinks they know everything about this man," he wrote. "I have been fortunate enough to spend enough time over the years to learn and understand the man he really is, a kind, generous, compassionate person who is constantly thinking about how to make the world a better place… I see him do that over and over again and it is truly inspiring. I am honoured to be your friend and let's keep fighting because if we all fight together love always wins."

Prince Harry lost his cool during the couple’s tour of Morocco in February 2019. The royal was seen telling a cameraman to back off as he accidentally knocked a child with his equipment.

Harry and Meghan were tasting traditional local cuisine including a pigeon pie dish, with the Prince cheering up the little girl by giving her the chef’s hat.

In May 2019, Prince Harry released a statement as part of his lawsuit against a photo agency. Harry and Meghan's £2.5million country home in the Cotswolds was photographed from a helicopter in January and the pictures were later printed in a newspaper, prompting the royals to move out after they feared for their "safety and security". The couple's "living area, dining area and bedroom" were shown.

Harry's statement was read in open court, noting that he accepted the agency's apology and substantial damages. Harry's solicitor, Gerrard Tyrrell, said: "The property had been chosen by the Duke for himself and his wife given the high level of privacy it afforded given its position in a secluded area surrounded by private farmland away from any areas to which photographers have access.

"The syndication and publication of the photographs very seriously undermined the safety and security of the Duke and the home to the extent that they are no longer able to live at the property."

And it's not just the British royal family who lose their temper! Princess Madeleine of Sweden had a testing time looking after her elder children Princess Leonore and Prince Nicolas as the family celebrated Crown Princess Victoria of Sweden's 40th birthday.

Mum-of-three Madeleine had to pick her children up from the floor and gently tell them off as the cameras clicked away.