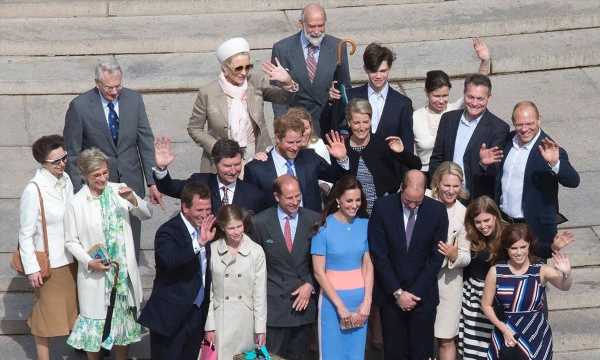 Joining the royal family is never easy, but the Duchess of Cambridge has remained one of the most loved members of the Firm since she joined in 2011.

Meeting the in-laws can be a challenge at the best of times, but when your future family members include the Queen, Prince Charles and the Duchess of Cornwall, it’s quite the path to navigate! Kate has supported Her Majesty by attending engagements, going on tours and taking on patronages, while also finding a way to reflect her own interests in her charity work.

It’s no wonder, then, that Prince William‘s wife has formed such strong bonds with the royal family. Let’s take a look at some of Kate’s best moments with her in-laws…

As the Duke and Duchess of Cambridge joined the Prince of Wales and the Duchess of Cornwall at the world premiere of James Bond: No Time To Die in September 2021, Charles was spotted greeting his daughter-in-law warmly with a kiss.

In June 2021, Kate stepped out for a very rare joint engagement with the Queen and the Duchess of Cornwall. Despite the formality of the event – the royals were attending the G7 summit in Cornwall – the ladies looked like they were having a wonderful time together.

The monarch even joked about using a sword to cut a cake. When an aide pointed out that there was a knife, she quipped, “I know there is. This is something that is more unusual,” prompting laughter from her relatives.

The Duke and Duchess of Cambridge were reunited with the Queen at Windsor Castle at the end of their UK-wide royal train tour in December 2020.

The monarch had spent much of the year in isolation amid the COVID-19 pandemic and the look on her face when she was reunited with her family members was absolutely priceless. Look at the smiles on the Queen and Kate’s faces!

The Duchess even borrowed her grandmother-in-law’s diamond pendant earrings for the occasion.

The foursome visited the Defence Medical Rehabilitation Centre (DMRC) Stanford Hall in Loughborough, where they were given a tour of the site and met patients and staff.

Photographers captured this lovely moment between William, Kate, Charles and Camilla, before the Duke of Cambridge tried wheelchair basketball.

Over the summer, the Queen retreats to Balmoral where she receives visits from her family on a rolling basis. In August 2019, Kate proved how close she is to our monarch by riding beside her on a trip to church during her family’s stay on the Scottish royal estate.

The couple were staying with the Queen for the bank holiday weekend, having flown up from their Norwich home with their children Prince George, Princess Charlotte and Prince Louis.

And while Prince Charles, the Duchess of Cornwall, Prince Edward and the Countess of Wessex with their daughter Lady Louise, Princess Anne, her husband Timothy Laurence, and Anne’s son Peter Phillips and his now ex-wife Autumn were also all visiting, it was Kate and William who shared a car with the Queen.

Kate and the Countess of Wessex have a very natural, close relationship. Here they are pictured shortly after Sophie tumbled into the carriage at Royal Ascot, and almost fell on Kate.

MORE: 8 photos that prove just how close Kate Middleton and the Countess of Wessex are

At Royal Ascot in June 2019, Kate and her cousin-in-law Zara Tindall showed off their close bond as they hugged and kissed each other on the cheek.

The Duchess looked gorgeous in a cornflower blue top and skirt by Elie Saab, while Zara embraced the florals in a Zimmermann dress. Kate and Zara have six children between them and the little tots are particularly close.

MORE: 11 of the royal family’s most memorable moments from Ascot

Kate and Prince Harry have known each other for over two decades, after Kate and William started dating at St Andrew’s University. Here, the Duchess and her brother-in-law are pictured back in 2008 long before the royal wedding.

They always looked to be having fun when they attended royal engagements together, with Harry often making Kate burst into hysterics with his down-to-earth humour, and vice versa.

MORE: 14 fun photos of the royals showing off their playful side

The Duchess of Cambridge shares a giggle with Meghan Markle during their first joint engagement together before the royal wedding in May 2018. Royal biography Finding Freedom revealed more details about when Meghan first met Kate.

Authors Omid Scobie and Carolyn Durand wrote: “Meghan bought a present for the duchess, who had celebrated her birthday just a day earlier. The soft leather Smythson notebook helped to break the ice, as did Meghan’s cooing over then 20-month-old Charlotte.”

MORE: 12 times the Queen left the royal family in giggles

Kate has always had a good relationship with Prince Charles, long before he became her father-in-law. After her engagement to Prince William was announced, Kate said Charles had been "very, very welcoming and very friendly" to her, while the future King also said he was "thrilled" and "delighted" about the news.

The Duchess had her hands full with Prince George and Princess Charlotte during the 2017 celebration of Trooping the Colour, but she shared a lovely moment with her late grandfather-in-law Prince Philip as she watched over the children.

MORE: 13 times the Queen has been greeted with a kiss from her royal family

Kate also has a good relationship with Prince Charles’ wife Camilla. The Duchess of Cambridge was given a very thoughtful wedding gift from her stepmother-in-law when Camilla presented her with a gold link charm bracelet. It featured a disc engraved with both of their monograms – on one side, a ‘C’ for Catherine and a coronet, and on the other, a ‘C’ for Camilla and a crown. Camilla’s granddaughter Eliza Lopes was also a bridesmaid at William and Kate’s wedding.

MORE: Royal rule-breakers! 17 times the Queen and her family bent the rules

The Duchess is always very respectful of her grandmother-in-law the Queen, and once revealed a conundrum everyone can relate to! Starring in ITV documentary Our Queen At 90, Kate revealed that she didn’t know what to give the Queen for Christmas but settled on homemade chutney made from her own grandmother’s recipe.

“She (the Queen) really cares,” Kate said. “I can remember being at Sandringham, for the first time, at Christmas. And I was worried what to give the Queen as her Christmas present. I was thinking, ‘Gosh, what should I give her?’

“I thought back to what I would give my own grandparents. And I thought, ‘I’ll make her something.’ Which could have gone horribly wrong. But I decided to make my granny’s recipe of chutney.”

Kate added: “I was slightly worried about it, but I noticed the next day that it was on the table. I think such a simple gesture went such a long way for me and I’ve noticed since she’s done that on lots of occasions and I think it just shows her thoughtfulness, really, and her care in looking after everybody.”

The recipe is thought to have been a marrow chutney; Pippa Middleton’s 2012 recipe book Celebrate includes instructions for ‘Granny’s Marrow Chutney,’ which takes several hours to prepare.

She even named her daughter Princess Charlotte after the Queen, giving Charlotte the middle names Elizabeth and Diana.

The Duchess looked totally at ease surrounded by her in-laws as they celebrated the Queen's 90th birthday in London.

Kate and her cousin-in-law Autumn Phillips tend to get together in Gloucestershire, when Prince George, Princess Charlotte and Prince Louis are reunited with their cousins, Savannah and Isla Phillips.

Kate and Meghan carried out their first joint engagement together at Wimbledon in 2018, just a few weeks after Harry and Meghan’s wedding.

The Duchess looked delighted to see her cousin-in-law Princess Eugenie during a trip to New York in December 2014. Eugenie was working for an auction house in the Big Apple at the time.

MORE: 9 photos that show Princess Eugenie has the closest bond with her royal relatives and in-laws

We love this photo of William, Kate and Zara embracing outside Westminster Abbey. The Duchess was eight months pregnant with Prince George at the time.

The Duchess bonding with her late grandfather-in-law Prince Philip at Princess Eugenie’s wedding in October 2018.

Kate and her aunt-in-law Princess Anne enjoyed a natter on the balcony of Buckingham Palace as they celebrated the RAF's 100th anniversary.

William and Kate were spotted catching up his cousins, Princess Beatrice and Princess Eugenie, at Royal Ascot 2017.

A hug and a kiss from her father-in-law!

And a peck on the cheek for Princess Anne.