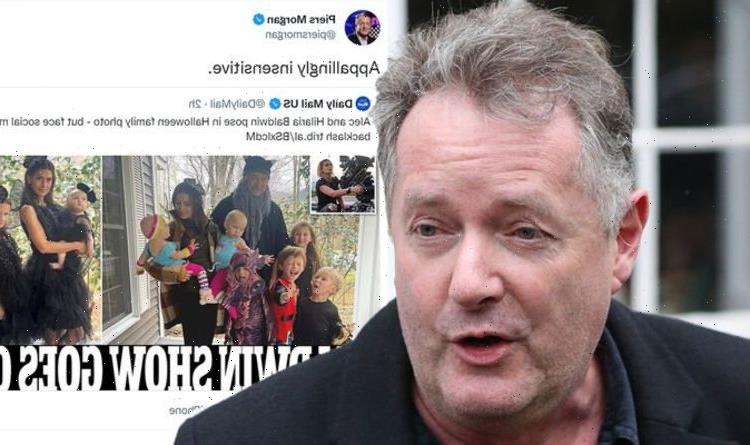 Piers Morgan, 56, has criticised Alec Baldwin, 63, for celebrating Halloween days after the actor accidentally shot cinematographer Halyna Hutchin. She died on October 21 on the set of his film Rust.

Piers replied to a newspaper’s Twitter post that included pictures of Alec and his family dressed up for the spooky season.

Piers responded in view of his 7.9 million followers: “Appallingly insensitive.”

The outspoken journalist was met with a mix of responses in the comments.

JoshyDeano1984 said: “Not really. He’s probably suffering with horrendous PTSD but is trying to carry on for his young family.

“What’s he supposed to be doing?”

LoveToFishScot added: “Yet it wasn’t appallingly insensitive when you posted pictures on here of a visibly upset Alec Baldwin right after the shooting happened?”

Wbaker78 stated: “Maybe he’s hiding his own personal pain for the sake of his family.”

In the photos Alec could be seen dressed up as a popular creature from the children’s book Where the Wild Things Are.

Hilaria could be seen sporting a spider witch costume, matching with three of her daughters.

Their three other sons were also in fun costumes, however it is not entirely apparent what they were dressed up as.

Hilaria captioned the images in view of her 929,000 Instagram followers: “Parenting through this has been an intense experience, to say the least.

“Today, we rallied to give them a holiday.

“Last min costumes…a little hodge-podge…but they were so happy and that warmed my mama heart.”(sic)

She added: “Happy Halloween, from the Baldwinitos. They give us love.”

The prop weapon was used during filming for the western movie Rust in New Mexico.

The Director of Photography was pronounced dead after being taken to hospital.