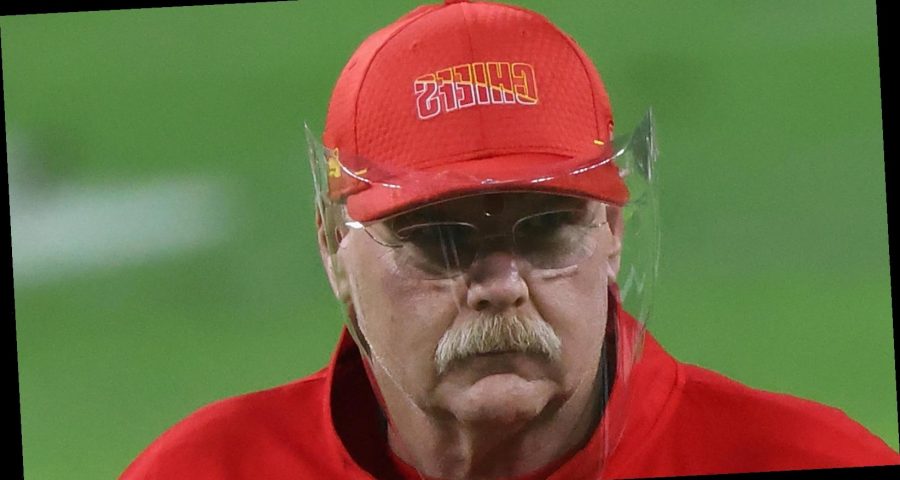 As if Kansas City Chiefs head coach Andy Reid didn’t have enough on his mind the week leading up to Super Bowl LV in Tampa against the hometown team, the Tampa Bay Buccaneers, the man had a very pressing personal matter on his mind as well.

Three days before the big game, Andy’s son, Britt Reid, who is also the Chiefs’ outside linebackers coach, was involved in a car crash in the Kansas City area that led to two young children being injured, according to AOL. Allegedly, Britt was driving his pickup truck on Interstate 435 when he ran into two cars parked on the side of the road.

Prior to the game, Andy hadn’t addressed the situation at all, likely wanting to keep his focus on the Super Bowl. But, after the Bucs won, the coach broke his silence on his son’s car accident. Keep reading after the jump to hear what he had to say about the sad situation.

After his team’s Super Bowl loss, head coach Andy Reid spoke up about the nighttime crash involving his son, Britt Reid, and two cars on a highway, according to AOL. He said, “My heart goes out to all those that were involved in the accident, in particular the family with the little girl who is fighting for her life. From a human standpoint, my heart bleeds for everybody involved.”

Although Britt was hospitalized with undisclosed injuries, two young children were hurt: a 4-year-old, who suffered non-life-threatening injuries, and a 5-year-old girl, who’s in critical condition. She “suffered swelling in the brain and bleeding around her brain” and “hasn’t woken since the crash,” according to a GoFundMe set up for the child. The crash is currently under investigation. Britt admitted to police that he’d had two or three drinks and taken the prescription drug Adderall before driving on the highway toward the Chiefs’ practice facility.

The GoFundMe page for the injured little girl is going strong

The GoFundMe page that was set up for the injured 5-year-old girl, which features a heartbreaking image of the unconscious child with a breathing tube, raised more than $55,000 within 15 hours, according to the New York Post. As of press time, the $100,000 goal was met and far exceeded, with a donation total of more than $326,000.

According to the page, which was apparently set up by the girl’s aunt, the young girl and her family had driven to and parked on a highway on-ramp to help another family member who was having car problems. That’s when Britt Reid (pictured above) smashed into one of the cars in his Ram pickup truck, injuring two children.

The page’s organizer, Tiffany Verhulst, posted a message about the older girl’s health to the page on Super Bowl Sunday: “[She] remains in the hospital in critical condition and is not awake. No progress updates as of right now. Thank you to everyone who has donated to support the family through this hard time, we are so grateful.”

In the wake of the car accident, new details about Britt Reid’s (pictured above) past have emerged, and it seems this isn’t his first brush with trouble. According to a search warrant obtained by Fox4 in Missouri, Britt has had “multiple prior DUI contacts.” The warrant also states that, when a police officer conducted a sobriety test at the scene of the accident in February 2021, the officer “saw four clues of impairment.”

According to the New York Post, Britt’s legal troubles began in 2007. When he and his late brother, Garrett Reid, were arrested, a judge described them as a “family in crisis” living in a home akin to a “drug emporium.” Saddled with gun and drug charges (including pointing a handgun at a driver in a case of road rage), Britt was sentenced to eight to 23 months in jail, plus five months probation. He pleaded guilty to carrying a firearm without a license, which is a felony.

While in jail, Britt was slapped with additional charges from yet another incident. Apparently, when he was out on bail at one point, he was driving under the influence in a parking lot and slammed into a shopping cart. For the two charges, he served a total of six months. His parole was dependent upon him enrolling in a drug treatment program, per the New York Post.

If you or someone you know is struggling with substance abuse and mental health, please contact SAMHSA’s 24-hour National Helpline at 1-800-662-HELP (4357).