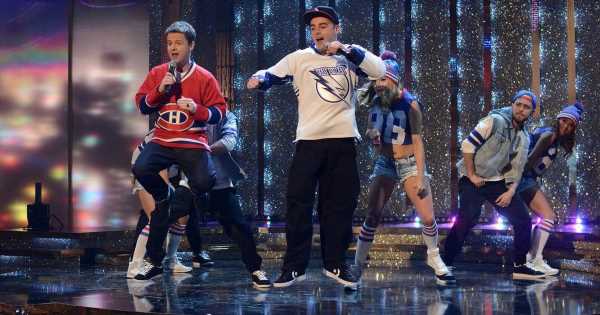 Ant McPartlin and Declan Donnelly performed the famous dance routine to their hit single Let's Get Ready To Rhumble at Ant's wedding to Anne-Marie Corbett, it has been revealed.

David Walliams was one of the 150 guests who attended the star-studded bash in Hampshire last weekend, spilling secrets of the evening party.

Britain's Got Talent judge David says the surprise performance was "the funniest thing" but he was banned from posting it on social media.

The 49 year old will discuss the nuptials on Channel 4's The Lateish Show With Mo Gilligan, saying the ceremony was "wonderful and very romantic."

He adds: "Ant and Dec also did Let's Get Ready To Rhumble on the dance floor.

"I filmed it and said to Dec, 'Can I put this on social media?'. He said no and I was really sad.

"It's one of the funniest things you have ever seen."

Christine Lampard is another of the wedding's celebrity attendees who has spoken out about the ceremony, revealing she had "lost her voice" before hosting Lorraine on Monday.

Reflecting on the occasion while standing in as host for Lorraine Kelly, Christine told Dr Amir Khan: "I was at a wedding over the weekend. I'm sure you may have spotted it? It was in the paper, of course."

The brunette continued: "Ant and Anne-Marie, they tied the knot on Saturday. Beautiful ceremony and beautiful wedding.

"It was clearly an even better night time party because not only was I screaming over the music to everybody, but I was obviously singing as well, and the voice went yesterday.

"It's slowly coming back today, but if I lose it completely, that's why," she said.

Ant looked dapper in a black suit with a bow tie during the wedding, while his new wife donned a stunning white wedding gown.

Dec reportedly delivered an "emotional" speech at his best friend Ant's wedding, where he acted as best man.

As part of the nuptials, Dec, 45, is believed to have told attendees how Ant was "the best friend a man could have" before reading a prayer at the ceremony.

Other showbiz names in attendance at the wedding were Phillip Schofield and his wife Stephanie Lowe, and Dermot O'Leary and his wife Dee Koppang.

For more gossip about Ant McPartlin and Anne-Marie Corbett's wedding, sign up to OK!'s daily newsletter.