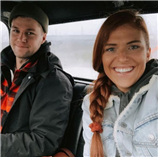 Audrey Roloff has made a retun to social media.

At least… observers think Audrey Roloff has made a return to social media.

She just looked quite different than she did before, according to a number of critics.

Those who have been paying close attention to the author and podcast host have noted that her cheeks look fuller these days. Her eyebrows look altered, too.

“She 100% got Botox,” claimed on Internet user upon studying a new photo of Audrey, while anotherd chimed in as follows:

“Looks like she had filler that wasn’t shaped right or overdone.”

To be clear, we can’t verify these rumors — and we wouldn’t typically care, either way.

Do you, you know?

As long as you are happy and confortable with yourself, isn’t that all that matters?

The thing is, Roloff has often promoted natural oils in the past, even finding herself in scalding hot water last year for doing so amid an outbreak of dangerous wildfires in Oregon.

As at least one person wrote in response to Audrey’s apparent changes, “Injecting literal toxins” into her face doesn’t match with Roloff’s image of “all-natural, non-toxin, chemical will kill you” points of view.

She’s profited off those alleged beliefs for years, pushing various products along those all-natural lines.

Are you living the story you’d want ready back to you one day?

“God cares more about what he’s doing IN you than THROUGH you,” the mother of two continued back then, proceeding to quote Ann Voskamp:

In our rushing we don’t make up time, we throw it away.

Audrey sure does like sounding as profound as possible, doesn’t she?

“Since I’m on the same ship plotting the same course, we best be gettin to it! Salute!” wrote husband Jeremy as a comment on his wife’s post at the time.

Did Audrey actuallly take this break to recover from plastic surgery and not because she was looking to refresh herself mentally or emotionally?

But some people are speculating.