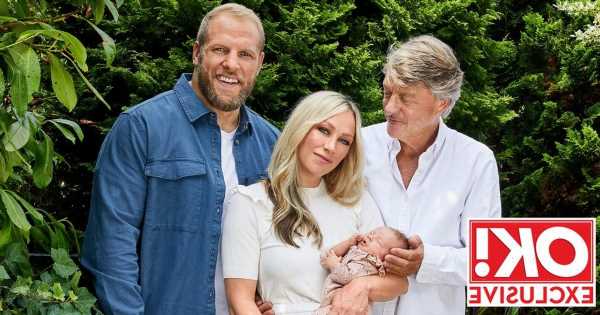 Richard Madeley has been dubbed the ‘baby whisperer’ by his daughter Chloe and husband James Haskell after they discovered he has the knack to settle newborn daughter Bodhi.

The Good Morning Britain presenter started bonding with baby Bodhi before she was even born, and now has the sweetest connection with his only daughter's firstborn.

Richard told OK!: “Because we’ve been living together, this is the first grandchild we’ve been really close to even before they were born.

“In the last couple of weeks leading up to Chloe’s due date, most nights I’d kneel down in front of her belly and say, ‘Come on, Bo-Bo, we’re all ready for you – why are you hanging around?’

“We’ve felt very close to the baby, literally, and we now have that incredible sense of miracle where one minute she’s been a huge bulge in our daughter’s tummy and the next she’s a real-life kicking, squealing human being.”

Chloe, 35, and James, 37, moved back in with her famous parents in London’s affluent Hampstead Heath a few weeks before the birth while renovations to their new home five minutes down the road are completed.

Richard, 66, and Judy, 74, were the first people to meet the beautiful bundle and arrived at the hospital “fit to burst” when she was born via emergency C-section on August 10th. They are now doting grandparents with Bodhi back at the family home.

Richard and Judy are also devoted parents to Chloe’s brother Jack, who has son Kit, four. And Judy shares twins Dan and Tom with her first husband David, and two granddaughters from Tom, who are nine and four.

James added: “Do you remember the other night when he came in she wasn’t settling, and as soon as he started talking to her she just settled like an absolute dream.

"With Chloe’s brother Jack – their boy Kit – Richard is unbelievable so if he is half the grandfather with Bodhi as he is with the rest of the grandchildren it will be wicked because he is amazing – he’s like the baby whisperer!”

Bhodi arrived at 8.36am on 10 August, weighing 7lb 9oz and with “long legs like her dad’s” after a difficult eight-hour induced labour ended in a c-section.

Chloe had planned on having a natural water birth with gas and air but when Bodhi stayed put 24 hours after her waters had broken, she was told she needed to be induced due to the risk of infection.