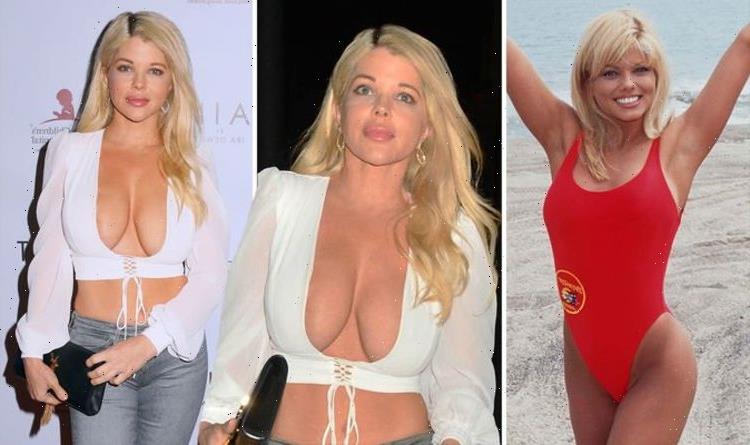 Donna D'Errico appears in a classic episode of Baywatch

Donna D’Errico turned heads in a very open white crop top which just about contained her unmissable assets. The 53-year-old undoubtedly garnered attention with her daring look, which also featured grey jeans and black pointed boots. The Baywatch star seemed unfazed by a potential nip slip as photographers arrived to snap her.

Posing confidently, she ensured all eyes were on her chest on the red carpet.

The actress aksi wrote her blonde long locks down in a wavy style.

On the red carpet, she posed for multiple snaps on her own as well as with Ira DeWitt.

In view of her 530,000 followers, she wrote: “Fun night celebrating my friend @ira_mira grand opening of @saintbyiradewitt in Santa Monica tonight.”

She went on to share other pictures with guests from the party.

Donna rose to fame as a Playboy model who later bagged herself a role in television series Baywatch.

In 1995, Playboy chose her as its Playmate of the Month.

A year later, she joined the American series, which also featured Pamela Anderson and David Hasslehoff, for two seasons as Donna Marco.

After leaving Baywatch, she appeared in independent films such as Intervention, Inconceivable, and The Making of Plus One.

Aside from still acting and modelling, she is also a mum-of-two.

She shares a 30-year-old daughter with rock musician Nikki Sixx, who she divorced in 2007 after 11 years of marriage.

Donna also has a son named Ryan, believed to be aged 28.

Yesterday, she celebrated being one year without alcohol, telling fans how making the change had impacted her health.

She spilled: “A lot of really cool things started happening when I stopped drinking.

“I started making conscious decisions in every area of my life.

“I learned how to actually address my stressors instead of numbing them, and by doing so I realized you can’t selectively numb.

“If you numb the bad, you also numb the good.”

The actress went on to say she was proud of herself for making the change.