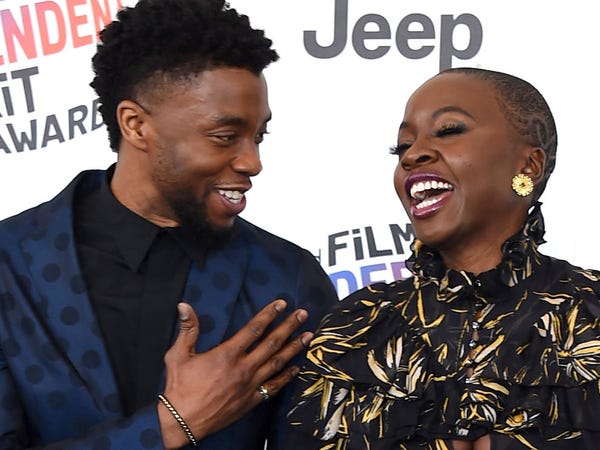 "How do you honor a king? Reeling from the loss of my colleague, my friend, my brother. Struggling for words. Nothing feels adequate," Gurira, known for her role as Okoye (leader of the Wakandan armed forces) in the Marvel Cinematic Universe, wrote in a message shared on Twitter and Instagram.

The actress posted a photo of her and Boseman hugging, which was taken at the world premiere of "Black Panther" in Los Angeles in January 2018, along with an image of their set chairs with their characters' names written on them.

Boseman died at 43 years old in his home on Friday, surrounded by his family, a statement posted on his Twitter account said.

The actor had been privately battling colon cancer since his diagnosis in 2016 and continued to star in several movies, even as his cancer progressed to stage four.

"I always marveled at how special Chadwick was," Gurira wrote in her tribute to the actor. "Such a pure-hearted, profoundly generous, regal, fun guy."

The "Walking Dead" actress went on to say that the way Boseman carried himself, on-screen as T'Challa/Black Panther or off-screen, made her job seamless.

"My entire job as Okoye was to respect and protect a king. Honor his leadership," Gurira said. "Chadwick made that job profoundly easy. He was the epitome of kindness, elegance, diligence, and grace. On many an occasion I would think how thankful I was that he was the leading man I was working closely with. A true class act."

Gurira went on to call Boseman "perfectly equipped to take on the responsibility of leading the franchise that changed everything for Black representation."

Boseman brought real-life icons to the big screen throughout his career.

He portrayed Jackie Robinson in "42," James Brown in "Get on Up," and Thurgood Marshall in "Marshall."

He made his debut as Black Panther in 2016's "Captain America: Civil War" and reprised the role for a groundbreaking standalone film released in 2018.

"He made everyone feel loved, heard, and seen," Gurira said. "He played great, iconic roles because he possessed inside of himself that connection to greatness to be able to so richly bring them to life.

The actress praised her costar's "heroic spirit" and "incredible courage and determination as he faced life's challenges." She also described him as "zen and sweet and funny (with the very best laugh), attentive, and truly, truly, good."

She concluded: "I am so thankful to have taken the Black Panther journey with him. To have known him, spent time in his light and leadership and to call him forever a friend."