Bo Derek is taking a walk down memory lane, and also looking proudly towards her future.

The 63-year-old actress recently spoke with ET via video chat while promoting her new Hallmark Movies & Mysteries film, JL Family Ranch: The Wedding Gift. During the wide-ranging interview, Bo opened up about the work that made her an iconic Hollywood fixture, her love story with actor John Corbett and the challenging life experiences that helped shape the woman she is today.

For the last 18 years, Bo has shared her life on a ranch in a rural part of California with Corbett. “It’s that twinkle in his eye. His humor. He has a lot of joy in him and I feed off of it,” the 10 actress gushed of her beau.  “The simplest things can make him so happy, so he makes my day brighter because of that, too. And he’s got a wicked sense of humor.”

Bo Derek Talks Ageism in Hollywood, Opens Up About Her Relationship With John Corbett

Bo Derek Talks Ageism in Hollywood, Opens Up About Her Relationship With John Corbett

Since the world shut down in March due to the COVID-19 pandemic, the couple has enjoyed an unexpected silver lining. “This has been the most time we’ve ever spent together,” Bo explained of their lives on the ranch. “You wake up, you have your coffee, you feed the horses, you feed the dogs, you feed yourself and you start this routine. So that part of it has kept us busy, occupied and it’s my favorite part.”

“It was a big gesture for John to move up here because he’s definitely a night time guy and a city guy,” Bo recalled. “When he first came up to visit me, I remember him saying at about 4 o’clock, ‘What do you people do all day?’ and at night, 8 o’clock, ‘Don’t you go out and have fun? It’s so early!’ kind of comments. And then slowly, he just started spending more time up here and now it takes a lot to get him to leave. “

But Bo candidly added that they’re just like every other couple, and said they’ve made a “conscious effort to get along.” She explained, “Maybe if there was something that wasn’t going your way, not standing up for yourself this time, let it go. And it’s been really good for us to learn these lessons. Now, as soon as we’re out it’ll probably all leave. Don’t forget, also, if you’re kind of famous, you go out and you work and people kiss your rear-end all the time, and then you come home and your partner goes, ‘That’s not going to work anymore.’ I think we both have some of that when we first get home.”

Still, nearly 20 years into their relationship, Bo said being “really, deeply in love” is the secret to their long-lasting relationship. “Funny enough, we’re such opposites in so many ways when we started out, that we took this relationship one day at a time. And it just happens to be 19 years later we’re still together and we’re gonna go for one more day.”

Many are inquisitive as to why the couple has not gotten married, to which Bo offered a simple response. “I don’t mind being asked [about marriage] because we’re the abnormal people,” she said. “It’s not really a conscious decision not to, it’s just at our age, we’re not going to have children, we’re not building a new family together, that this is important to a family tree. So for us, it would just be a piece of paper.”

Bo also has a definitive answer for one of life’s hotly-debated questions (at least, when it comes to Sex and the City fans!): Team Big or Team Aidan?

“I think I was [team] Big for [Carrie], not for me. But for her,” Bo said with a smile as a nod to John, who portrayed Aidan Shaw on the beloved HBO series. “I just didn’t think [Aidan] was right for her. I think he was right for a lot of women, but for her, I didn’t think so. I think she made the right choice.”

And while Carrie Bradshaw ultimately ended up with Mr. Big, Bo still has questions and wants to see the iconic characters back together once again. “It’s really interesting. So well-written. Really worthy of binging again. It’s so creative. I loved it. I loved both movies also, and I miss the girls. Don’t you miss them? I’d like to know what they’re going through now,” she mused. 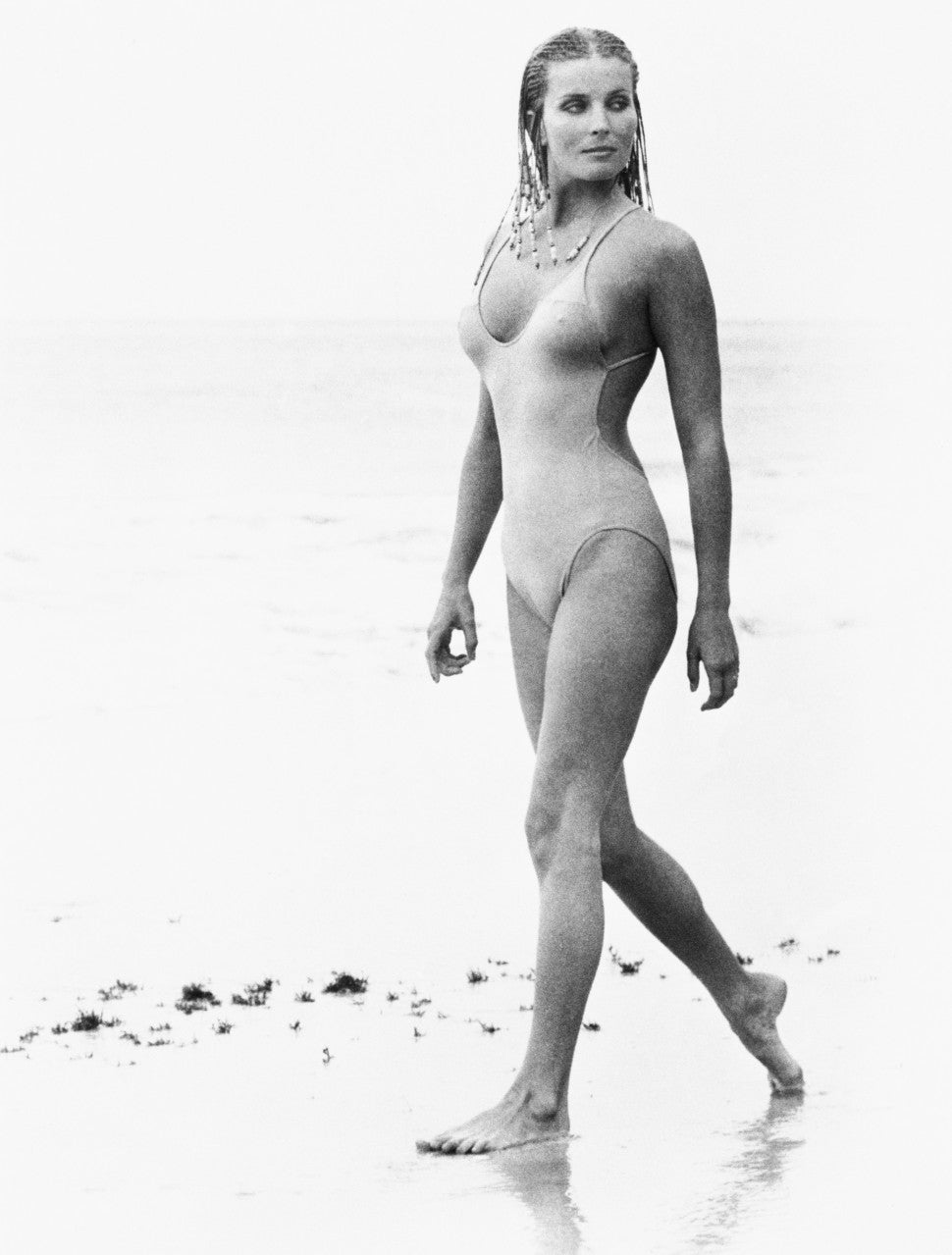 Bo’s career kicked off in 1979, when she launched to superstardom overnight following her role in the romantic comedy, 10.

“It was life changing for me,” Bo recalled of achieving so much success in a short period of time. “I wasn’t an aspiring actress, so I was so unprepared for becoming famous overnight and being followed by paparazzi every place I went and having things written about you that just aren’t true. They got very personal and pretty nasty.”

When Bo thinks back 41 years ago to the iconic scene on the beach, running in a swimsuit with her hair in cornrow braids, she said she had no idea it would turn into a pop culture phenomenon. “I’m hardly in the movie!” Bo exclaimed. “I thought I was very lucky, I was getting a great trip to Mexico and that’s about all I expected of the movie, so it really did take me by surprise.”

The actress also acknowledged the “controversial” nature of wearing her hair in cornrow braids at the time, and as a result, being referred to as a “culture vulture.” Bo explained that her mother worked as actress Ann Margaret’s hair stylist in Las Vegas, and modeled the braids after ones she saw and admired on one of Margaret’s backup singers.  “I can tell you, at the time, when I wore them, every place I went, African-American women came up to me and said, ‘Thank you, you’ve made this mainstream, you’ve made it acceptable. I can wear braids to my work now at the bank or wherever I want.’ So it’s hard to imagine that a boss would come up to a woman now and say, ‘You can’t wear your hair that way,’ but only a short time ago they did, so that was my experience with the braids. I was just copying. And I wouldn’t do it now because I think now, it is hurtful to some people… and I wouldn’t want to do anything to hurt anyone’s feelings.”

As for a reboot, Bo is all-in to revive 10, and even promised to make a cameo. “It’s a great story and I’ve heard some really fun ideas to bring it and make it contemporary. I know Rob Schneider was working on it for a while and he would’ve been fantastic,” she shared. “At one point, I was gonna be the girl’s mother and then now, I would have to be her grandmother!” Bo quipped.

As the actress looks to the future, she also is reminded of the past, largely due to her recent autobiographical documentary, Bo Derek: In My Own Words. Among the participants in the documentary are Linda Evans, the actress who was married to director John Derek, who left Evans for Bo when she was still a teenager.

“The Linda Evans part really knocked me down,” Bo revealed. “We’re friends but we’ve never discussed it. I’ve never really heard her, she’s never talked about the relationship. And for people who don’t know, she was married to my husband, John Derek, when we got together and it was very difficult and it was a very emotional and in many ways a sad time… She was always so private and she’s this incredibly fantastic woman, and so it was interesting that she decided to do it.”

Bo said Linda’s participation in her documentary caught her by surprise, and even made her cry.

“I think when she explained how painful it was for her, the breakup, and the fact that I was part of that, I’d never heard her side of the story. I will never forgive myself for being part of that, the breakup of that marriage,” she explained. “That doesn’t mean I think about it everyday, but I know I learned from it and I would never do it again and never have.”

Today, Bo considers Linda a friend and has nothing but high praise for the former Dynasty star, whom she calls “a very strong woman.”

Bo’s latest project is a feel-good family film called JL Family Ranch: The Wedding Gift, produced and helmed by Jon Voight, who specifically sought Bo out for the role.

“I’ve known Jon Voight a long time. I think he’s just the most wonderful man,” Bo gushed. “With Jon, it’s very intimidating because I don’t work often. I get very rusty and I just walked up to him right away and said, ‘Make me good in this, whatever it takes. Kick me, smack me, don’t let me get away with anything!’ And he laughed and he was always so complimentary. So you walk off the set every day kind of puffed up and feeling good.”

The movie is the second installment in the franchise, and centers around the trials and tribulations of a veteran rancher and his extended family. With an ensemble cast that includes James Caan, Teri Polo and Dylan Walsh among others, Bo said making the film was a true delight, complete with cast dinners and lots of laughter.

Bo confirmed there are conversations about possibly doing a third film, or even turning it into a series. She added that she would love to continue on the journey “however far they can take my character, it was a lot of fun to work on!”

Bo Derek Opens Up About Her Relationship With John Corbett