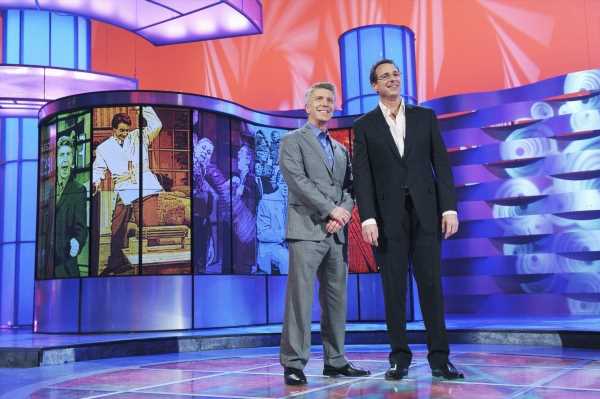 Although America already loved Bob Saget as Danny Tanner on Full House in 1989, the comedian was not the first choice for America’s Funniest Home Videos at its inception. He was the beloved TV dad to Michelle (Mary-Kate and Ashley Olsen), Stephanie (Jodi Sweetin), and DJ (Candace Cameron Bure) in the late 80s and 90s. Saget also starred in the Netflix reboot Fuller House for five seasons and had only begun touring in 2022, when his life ended abruptly. Robert Lane Saget died at the age of 65 on Jan. 9, 2022, but he leaves behind a comedy legacy, including a long run as host of America’s Funniest Home Videos.

What was Bob Saget’s cause of death?

As of the publication of this article, Bob Saget’s cause of death is currently unknown, but the police do not suspect drugs or “foul play” were involved. At 7:46 on Jan. 9, 2022, the Orange County Sheriff’s office tweeted the shocking news. Saget’s Full House co-stars Candace Cameron Bure and John Stamos shared heartfelt condolences.

“Earlier today, deputies were called to the Ritz-Carlton Orlando, Grande Lakes for a call about an unresponsive man in a hotel room,” the tweet read. “The man was identified as Robert Saget & pronounced deceased on scene. Detectives found no signs of foul play or drug use in this case.”

Vin Di Bona and Steve Paskay produced the first America’s Funniest Home Videos episode as a one-hour-long special. It debuted on Nov. 26, 1989, with Bob Saget as the host. However, according to the Television Academy, Di Bona admitted that his first choice for a host of the new series was John Ritter from the ABC sitcom Three’s Company. Since he was unavailable, Di Bona contacted Saget, after watching him on The Tonight Show.

Before the first special aired in 1989, Vin Di Bona Productions placed ads in national magazines, including TV Guide, asking people to send their home videos. Kellie Martin from Life Goes On assisted Saget during the special. The show was so successful that it became a regular weekly half-hour primetime series. Saget made his hosting debut alone for the first episode on Jan. 14, 1990.

Bob Saget hosted America’s Funniest Home Videos from 1989 to 1997; however, he was restless for the last two seasons. The show became repetitive and Saget was ready to move on to other things. When Saget’s contract expired in May 1997, the producers chose Daisy Fuentes as the new host. However, Saget revisited the series three separate times after retirng from the show. He co-hosted a 20th anniversary special with Tom Bergeron on Nov. 29, 2009. Saget also made a cameo appearance in 2015 during Bergeron’s final episode hosting. Lastly, he returned to co-host a 30th-anniversary special edition episode AFV: America… This Is You with Bergeron and future host Alfonso Ribeiro.

The Fresh Prince of Bel Air’s Carlton Banks remains the host of AFV today. ABC News interrupted the Jan. 9, 2022 episode of AFV with a special report announcing the death of Bob Saget.