CHLOE Goodman has revealed that she is engaged to footballer Grant Hall – who has said that the star "saved his life".

Pregnant Chloe, 26, got the shock of her life when 28-year-old Grant got down on one knee during their baby's gender reveal last month, but it hasn't always been plain sailing for the couple. 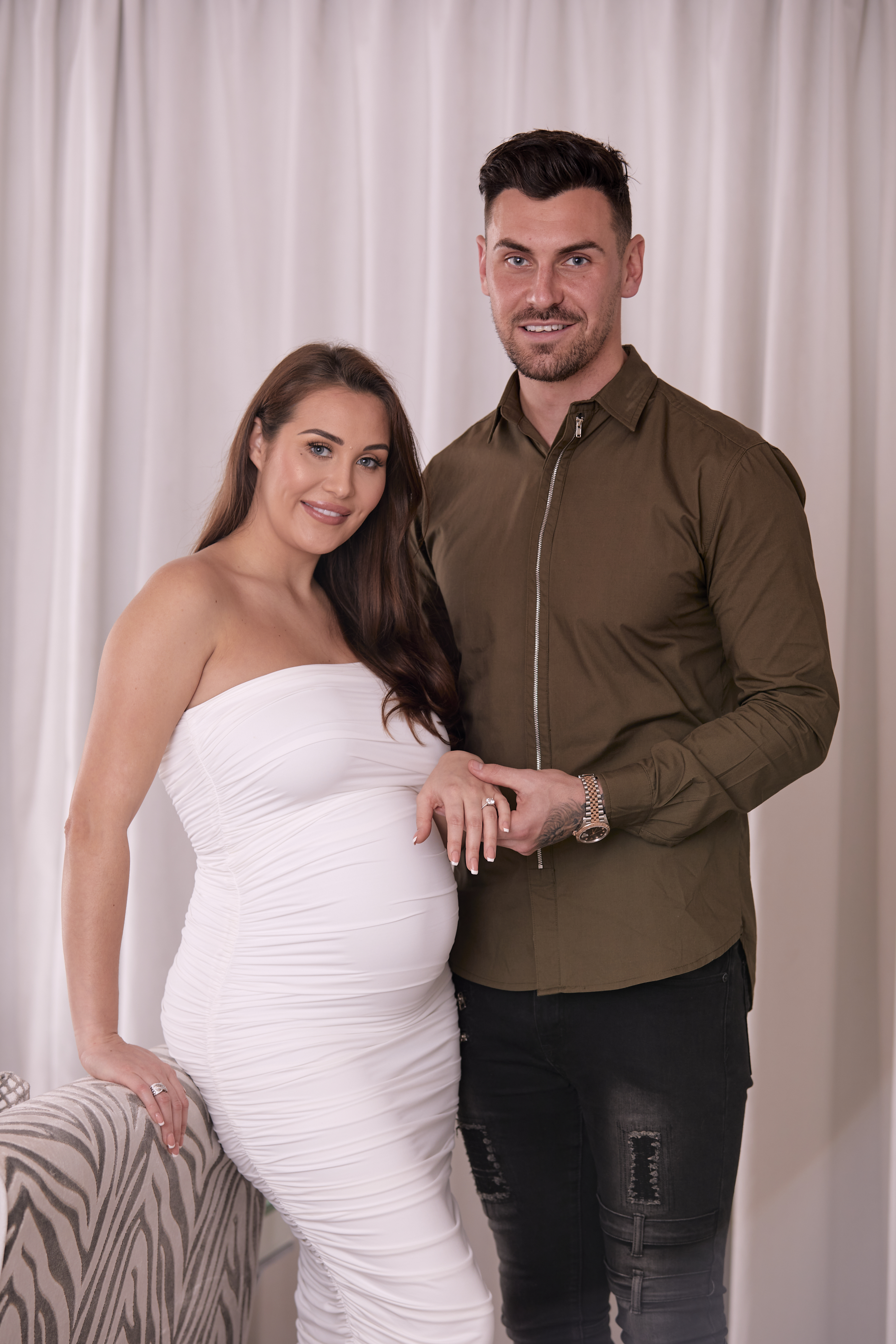 Speaking exclusively to The Sun Online, Chloe explained how she and the sportsman first met during a dark time in both of their lives, with Grant particularly struggling with his mental health.

She shared: "We met at a really bad time in our lives; I had just broken up with my previous fiance and also lost a child. I moved back to my Brighton home town and had to pack up and close my clinic and start again.

"[Grant] had just gone through a break up as well and was dealing with a terrible time in terms of football – he didn't know if he was going to play again.

"So we were both going through a really bad time around the same time."

Chloe went on to reveal her guilt for not realising just how much Grant was struggling, adding: "He went through 19 months of pure hell, and I live with him and I didn't know how bad he was. It made me feel like, as a partner, that I had let him down when it all came out. 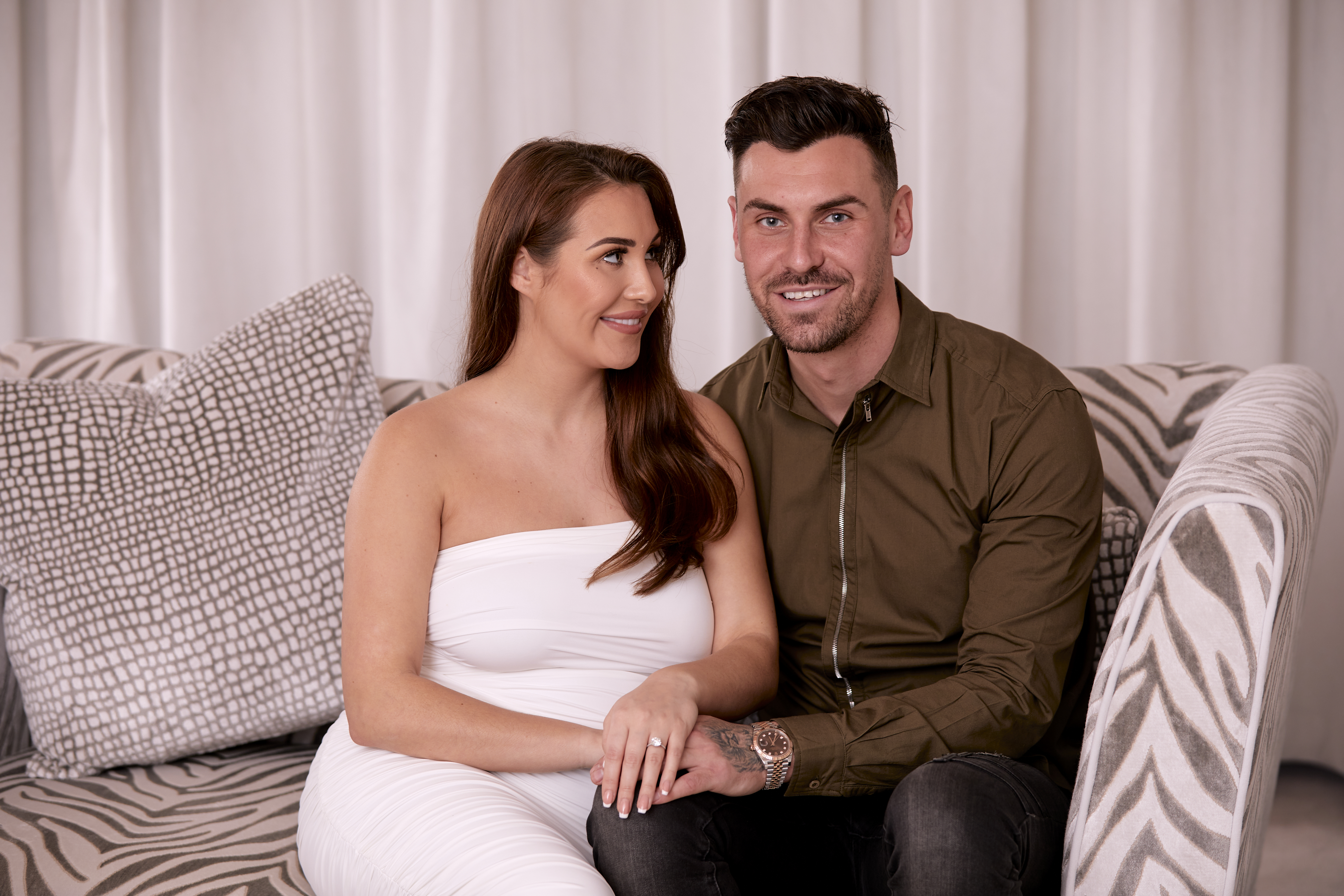 "I knew he was bad, but I had no idea the extent of how bad it was."

But Grant had a different take, telling us that Chloe helped him through the darkness.

The footballer said: "In a way, she did save my life, because at that point in time my injury was really bad so I thought I might not play again.

"I was going out five, six weeks in a row, using it as a coping mechanism to distract myself from my injury, just drinking and trying to forget about football because I didn't want to be around it, and that's when I met Chlo.

"I got back on track, we started keeping busy, in a way she did actually save me. She has been great, she has opened my eyes." 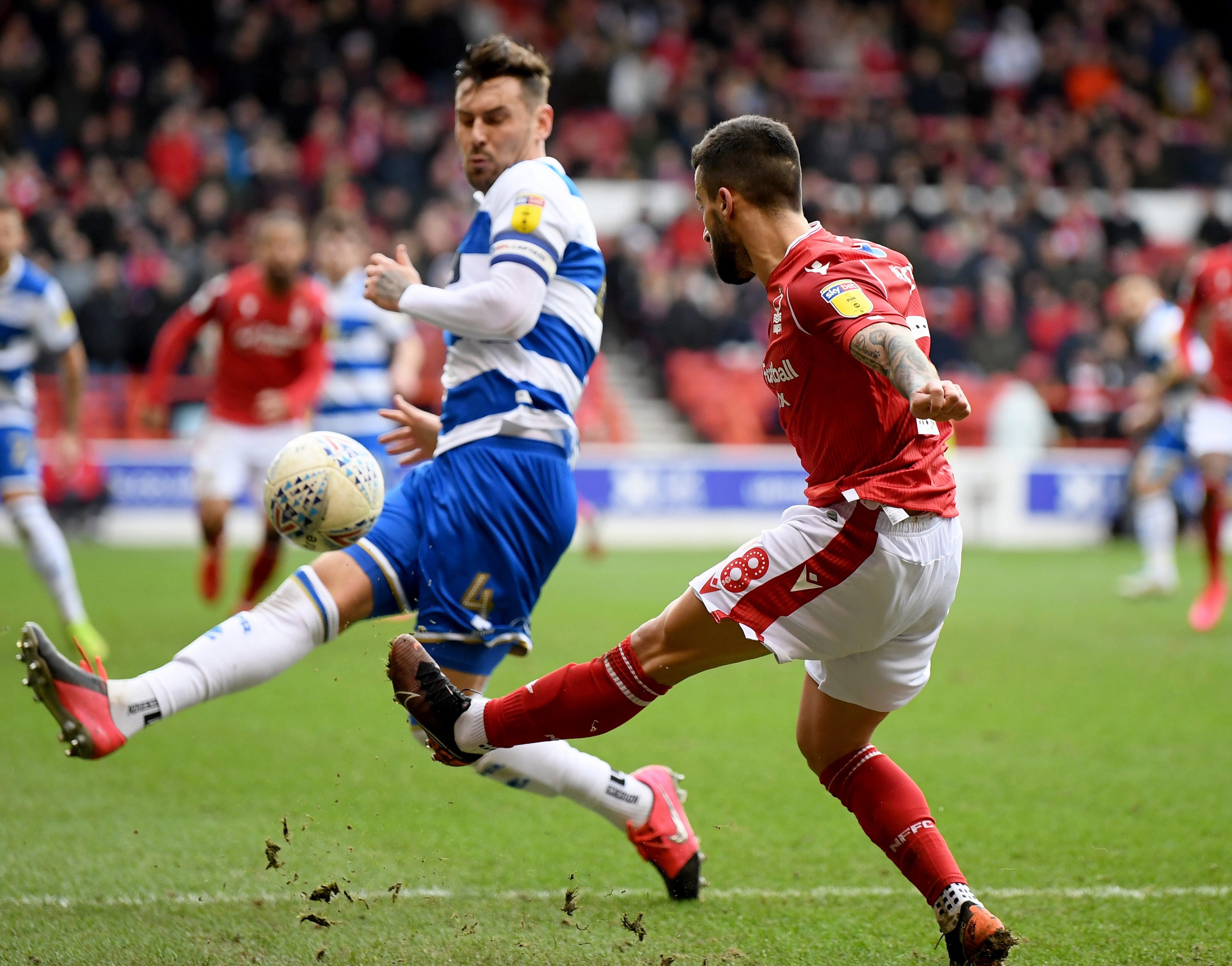 Chloe elaborated: "Mentally, when I met him, he was in the worst way – it was just about getting through that next day and not looking too far into the future.

"We would run errands together and that's how we got through things. It sounds ridiculous, but having something else to focus on… Before you know it, it has been six months and you're through the worst of it.

"His lasted a lot longer than mine, unfortunately, with his mental illness – he thought he'd literally have to retire from football."

She added: "For two years I had no idea that he was struggling with mental health; when he was doing the campaign he did a long radio interview and sent it to me to listen to because he couldn't tell me exactly how he felt. 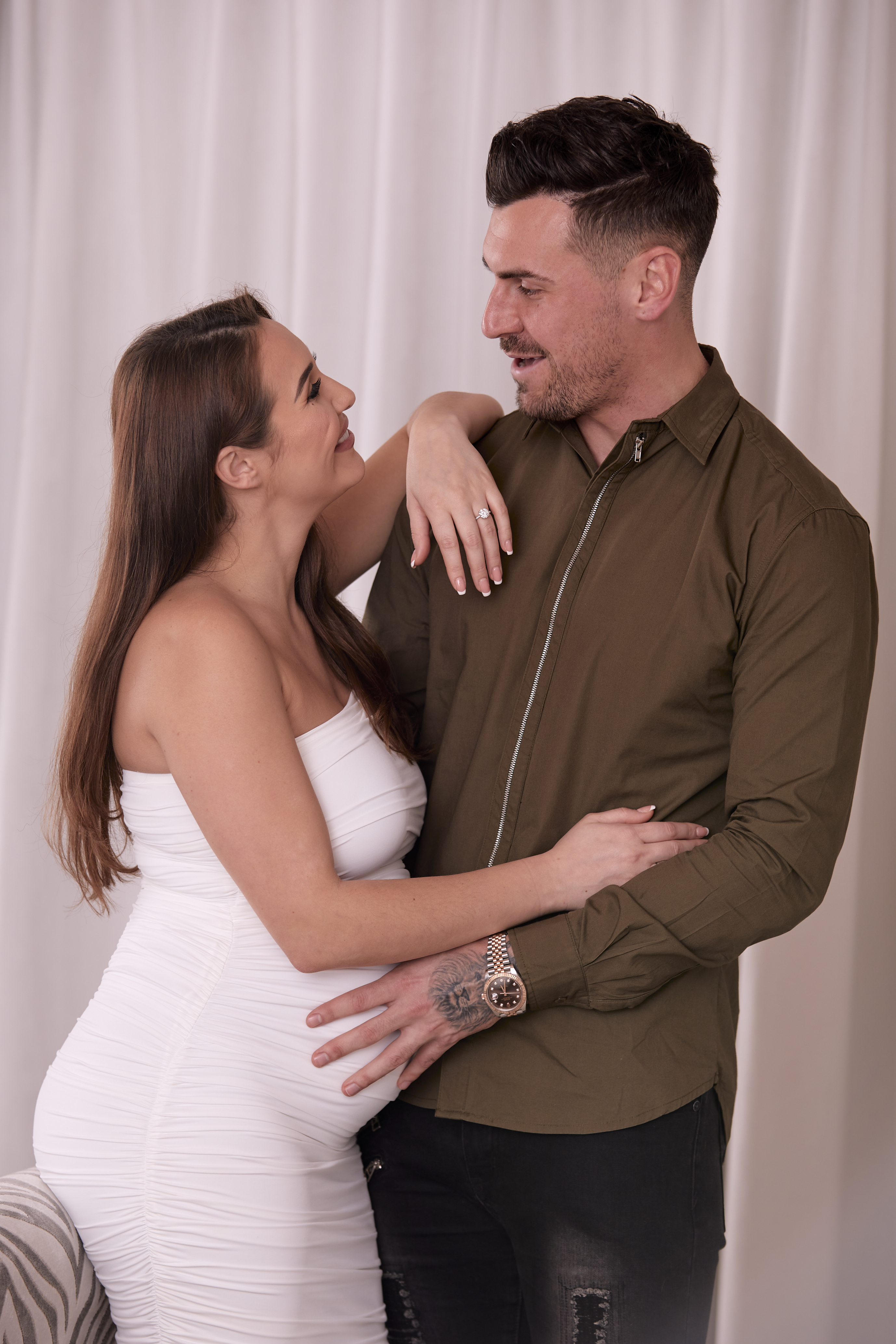 And it appears that Chloe and Grant were always destined to meet, with Grant moving next door to her father Sean's house before they had even crossed paths.

He explained: "I knew who she was, we have mutual friends, but had never met throughout the years somehow.

"I knew her dad lived next door, and we met at a housewarming party a few months later."

Chloe laughed: "You met my dad before you met me! I thought you were married, I had no idea – I was going through a break up so the last thing on my mind was finding someone new.

"It was just bizarre how it all worked out, basically I couldn't get rid of him because he was just next door.

"Nothing was forced, everything just kind of fell into place at the right time." 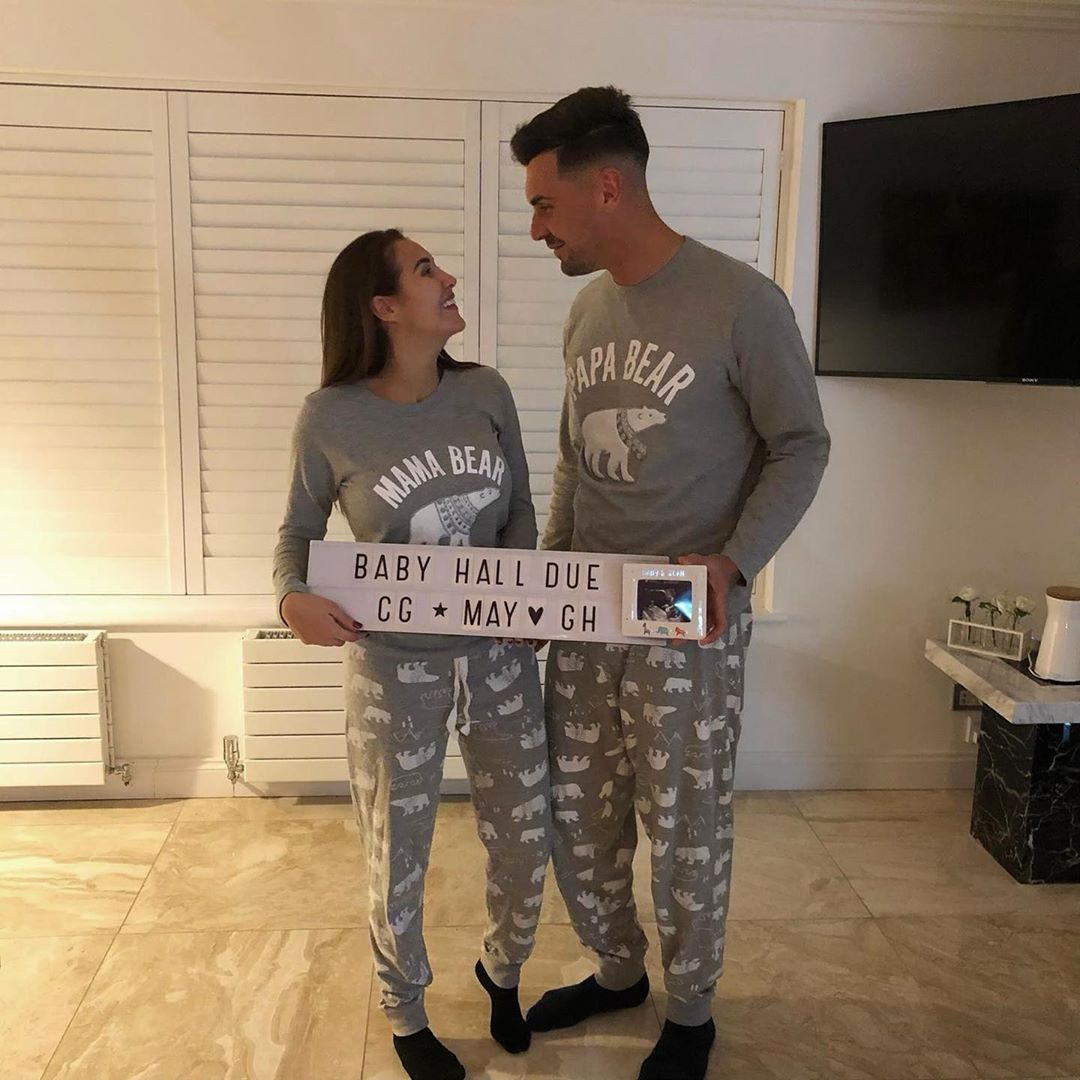 In November, Chloe and Grant announced that they are expecting their first baby together in May – with Grant proposing two months later at their glitzy gender reveal with close friends and family.

Explaining how he knew that it was time to get engaged, Grant told us: "I asked for her dad's blessing about six to eight weeks before.

"I always said I wanted to do it at the gender reveal, I knew it would be the element of surprise for her, she won't expect it."

And he couldn't have been more right, with Chloe joking that she "nearly keeled over" when she turned to see that her partner was down on one knee.

She quipped: "He did it literally just before the fireworks finale. It was a complete shock – I wish that I did kind of have an inkling because then my facial expressions would be a little more attractive!" 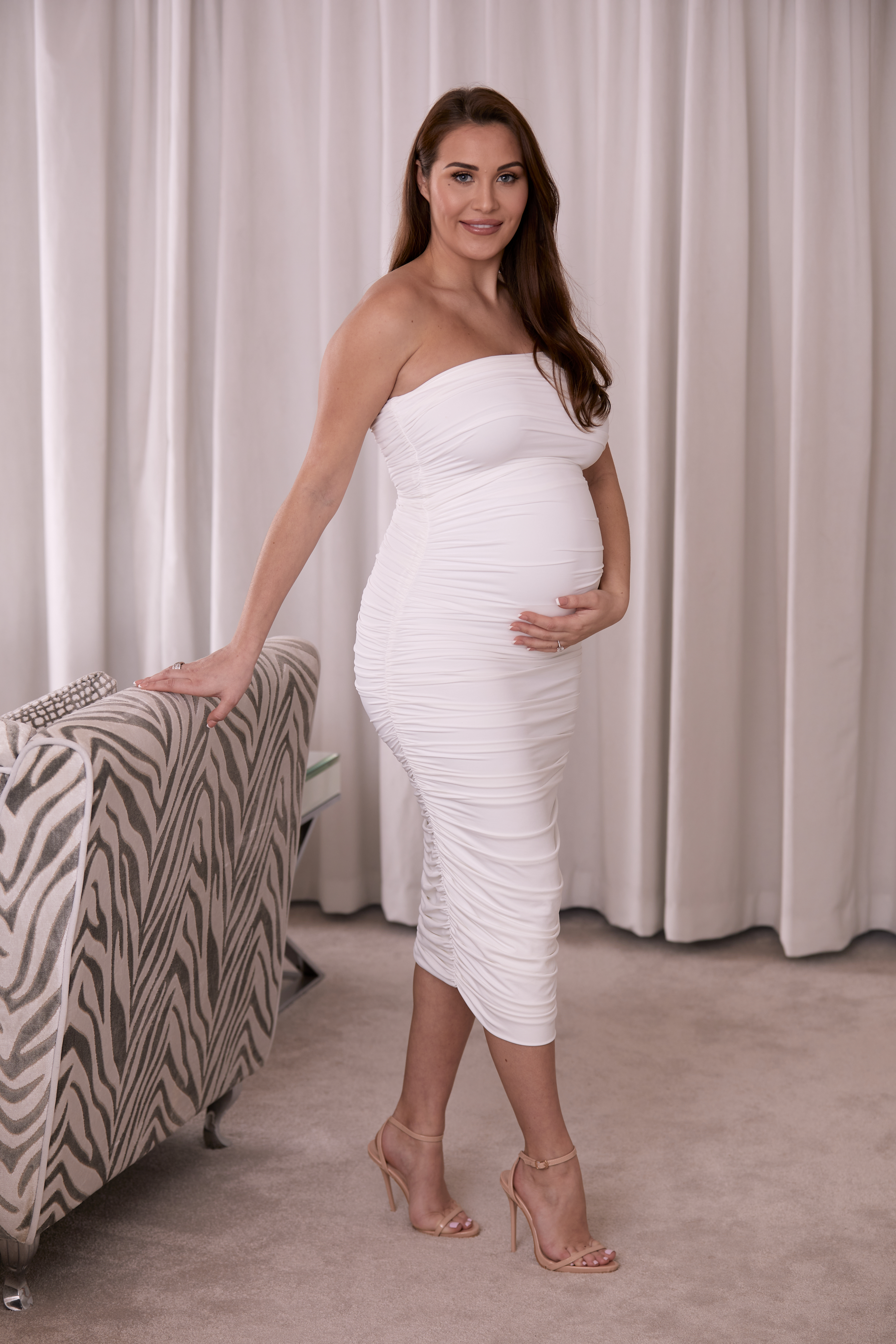 But Chloe very nearly ruined Grant's big surprise, with the star going on to explain that some of the guests hadn't even realised that they'd got engaged because there was so much going on at the do.

She shared: "Everyone was behind us, and I was so busy looking up to figure out if we were having a girl or a boy and on the video I kept grabbing [Grant] because you kept walking away from me!"

Chloe continued: "He was trying to bend down and I was grabbing him – I nearly ruined my whole engagement.

"I actually turned around to somebody like: 'Oh my god, did you know?!' and she went: 'What? Oh my god, he proposed?!' – she was still looking up at the fireworks!" 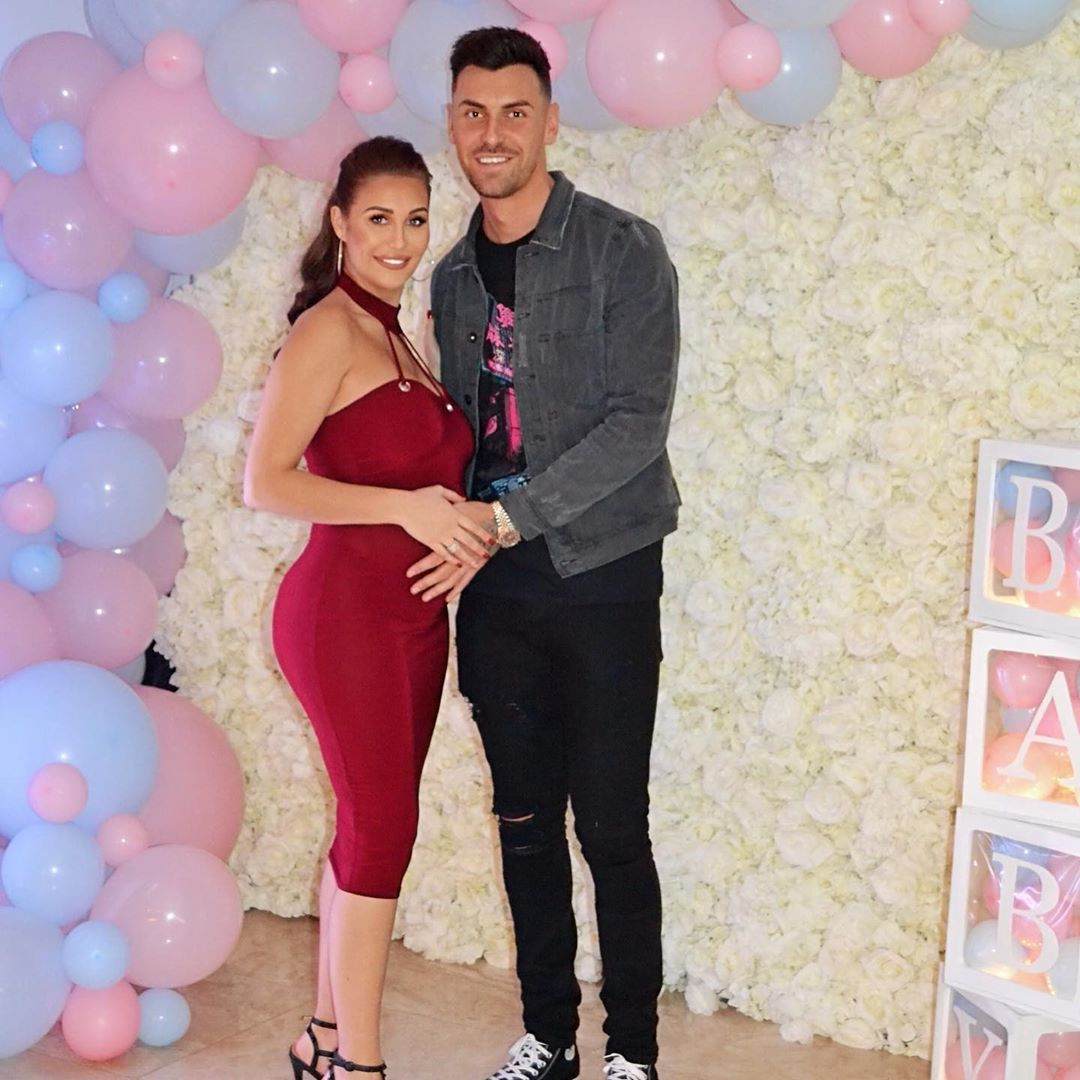 The engagement came just seconds after Chloe and Grant found out that they are having a little girl, and the pair are keen to have a long engagement so that their daughter can take part in the big day.

In addition to the pregnancy and proposal, the two's house is currently being renovated, and Chloe has also been plagued with a series of medical issues throughout her pregnancy – leaving them in a "really bad place" at the time.

In March 2019, she was forced to have half of her cervix removed after being diagnosed with grade three abnormal cells, which is just one stage before cervical cancer.

Shortly before Christmas, Chloe had to have a cervical stitch amid fears that she could lose her baby, and earlier this month the star was rushed to hospital with a pulmonary embolism after Grant noticed that she was coughing up blood clots. 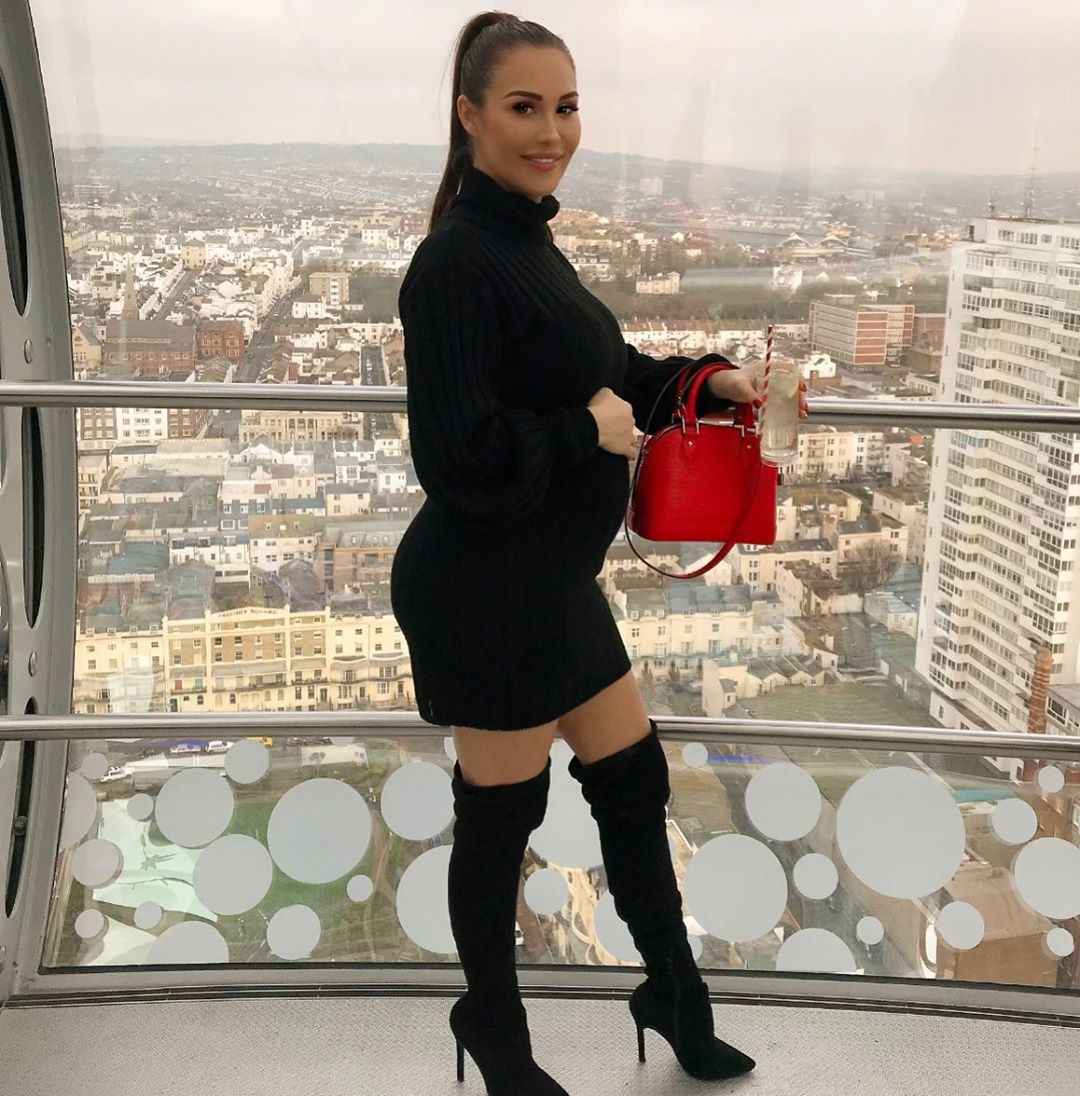 Discussing wedding planning, Chloe said: "We are doing a lot in a really short space of time… We did speak about it after we got engaged because the first thing people say to you is 'when are you getting married?' and I thought to myself: 'Oh my god, the thought of planning something else is just pressure and stressful.'

"We just want to enjoy our new little family, and when the time is right we will talk about actually planning a wedding.

"We want her [their baby] to be able to walk down the aisle because she will be the flower girl." 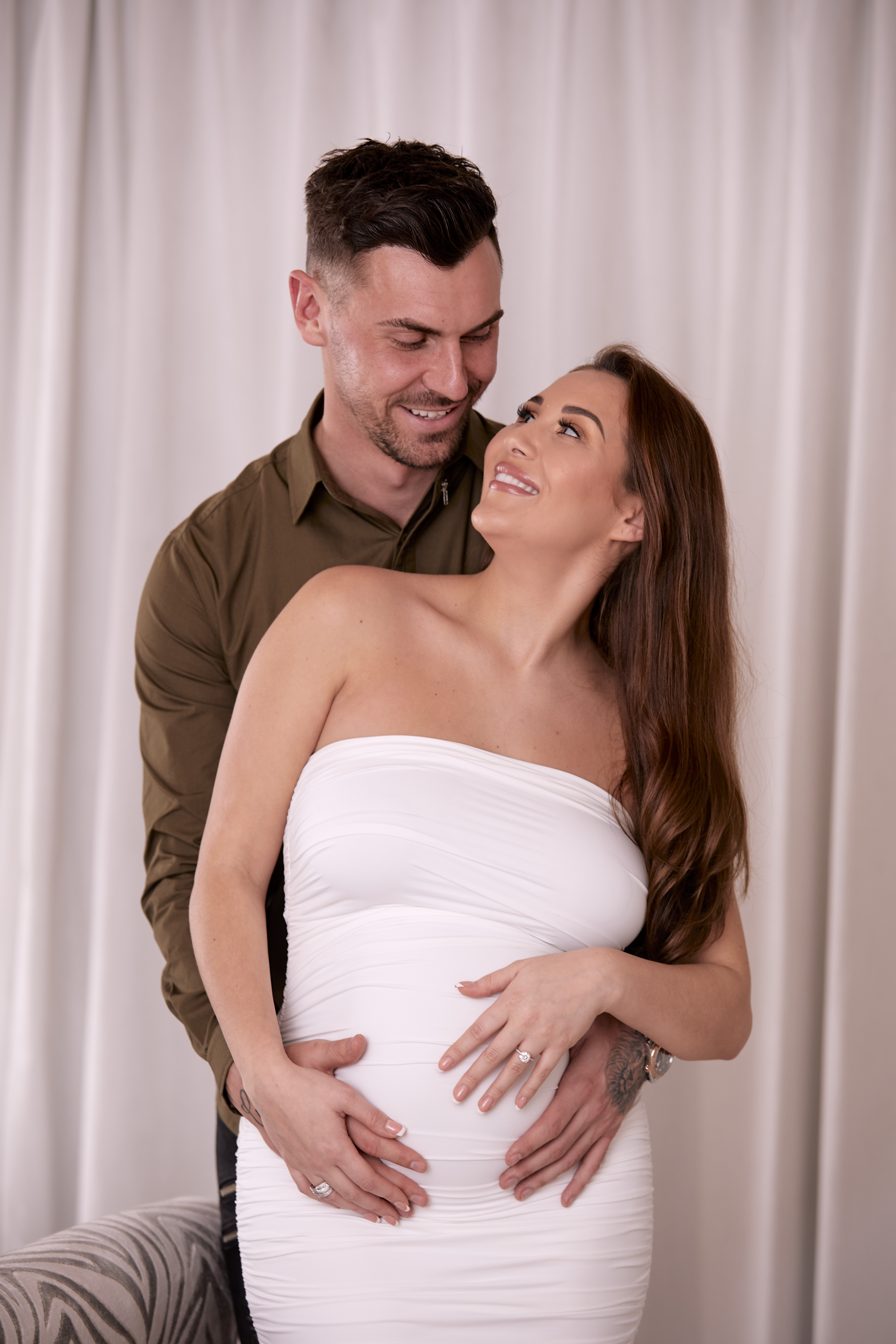 Chloe is due to give birth just three and a half weeks after her older sister Lauryn, who is expecting her miracle child with footballer Kyle Walker in April.

Chloe told us that she will be with Lauryn when she gives birth – but won't let her big sis put her off childbirth.

She said: "I am going to be there, of course, I absolutely adore her and we have done this whole journey together so far.

"I know her melodramatics will be really over the top and I am quite a chilled person." 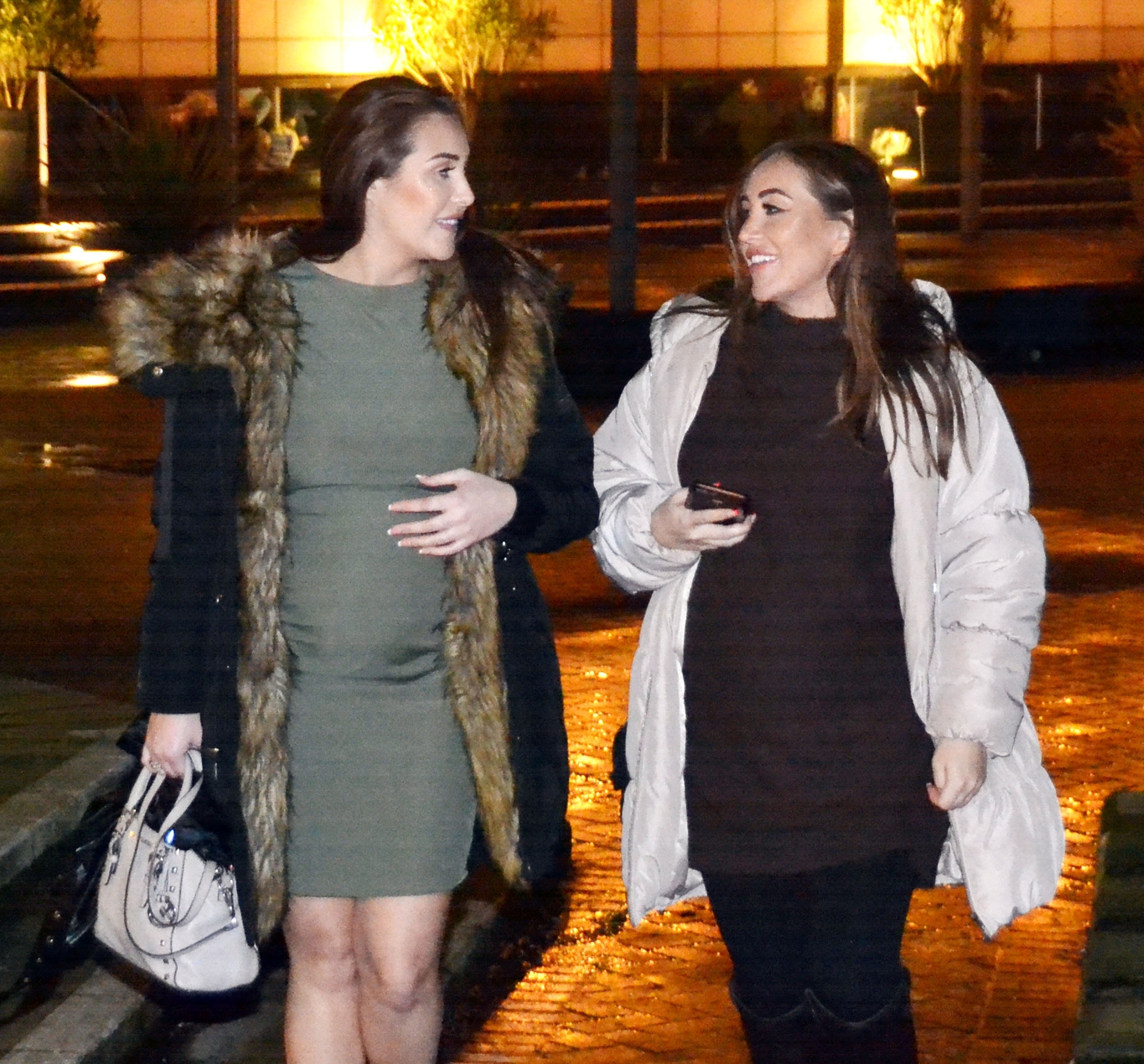 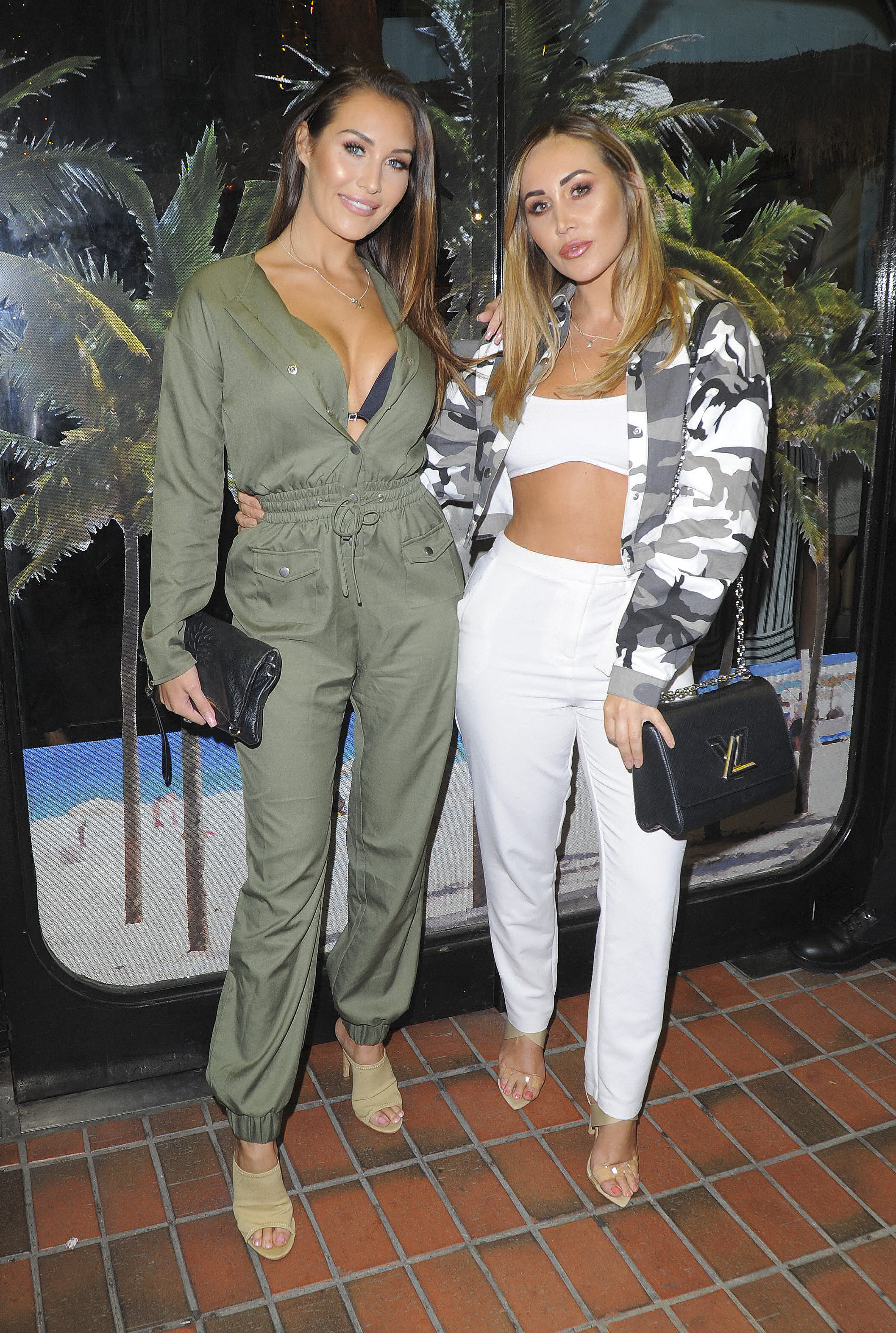 The two sisters are also planning to go away for a mini break before they give birth in a bid to get over their "stressful" pregnancies.

Chloe said: "Me and Lauryn are going to do a pregnancy wellness retreat together.

"I have had a stressful pregnancy, hers has been kind of stressful as well, but we are both calming down now and near labour we want to do a nice wellness retreat.

"It's not too far – just at the Glass House Retreat in Essex – so we are going to be there for a couple of days and spoil ourselves."