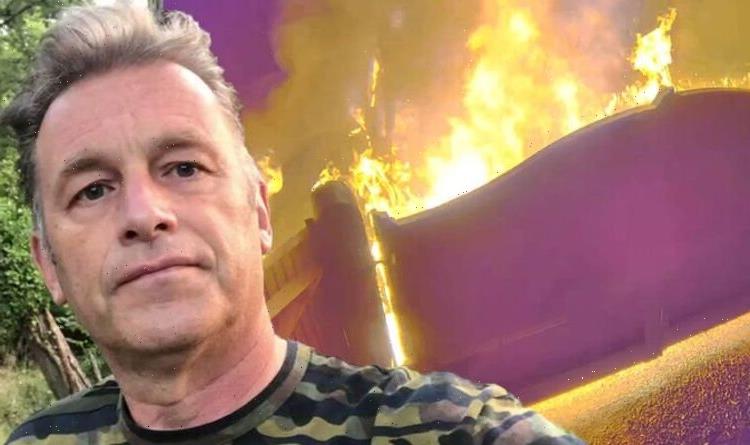 Chris Packham details impact of arson attack on his family

Wildlife expert, Chris Packham, 60, took to Twitter yesterday evening to share a horrifying picture of the firebomb attack on his home in October of last year. The television presenter has shared the picture in a bid for information, and in preparation for his TV appearance discussing the terrifying ordeal.

Chris’ home in the New Forest was targeted by two masked men on October 8 last year.

The broadcaster said the men set a vehicle on fire at the gate of his home, causing the dangerous blaze.

He posted a picture of the horrifying moment the fire appeared to begin to spread to his gate on Twitter today to share an update on the incident.

In view of his 540,900 followers, he penned: “Tomorrow I’ll be speaking on @BBCCrimewatch on @BBCOne at 10am about the firebomb attack on my home last October.

Many social media users took to the post’s comments to express their concern over the “scary” picture of what had happened.

Pembs_flyer said: “Still can’t wrap my head around why anyone would want to do this.

“You are a standup human being, Chris. I really hope the people who did this get what they deserve.”

LifechatwithD added: “We need more people like you who use their celebrity status for the greater good. A wonderful man. Thank you.”

Karenwr75084451 commented: “Horrific. This must have been so frightening.”

Chris took to Twitter at the time to discuss the horrendous attack in a five-minute long video.

He questioned if the men were members of conservation organisations or rural groups, or the “internet trolls, who fill my timeline with hate”.

The TV broadcaster also mentioned how he had previously discovered dead animals left outside his home, including foxes and badgers, but actions against him had now escalated “to damage that property”.

Chris continued: “Perhaps the cost is having my gate burned down, causing thousands of pounds’ worth of damage.

“If you think that by burning down those gates that I’m suddenly going to become a supporter… then you’re wrong.

“I will just carry on, because I have no choice. I cannot and will not let your intimidation sway me from my cause.”

The fire at his property came a day before he delivered a 100,000 signature petition to Buckingham Palace, which called on the Royal Family to conserve nature on their estates and reintroduce animals like beavers and the wild boar.

Chris previously discussed a “very calculated” death threat he received in 2019 after campaigning for measures to protect birds from being shot.