Chrishell Stause took to her Instagram Story to address “sources” who were “speaking” for her after her ex-husband, Justin Hartley’s, secret wedding! See what she told her fans on IG!

Chrishell Stause reminded her Instagram followers that she is “booked and unbothered” after her ex, Justin Hartely, secretly got married to Sofia Pernas. The Selling Sunset star, 39, took to her Instagram Story on May 18 and responded to reports that cited sources for Chrishell’s supposed reaction to her former husband’s nuptials. “I see ‘sources’ are speaking for me,” Chrishell began her message on her IG Story, adding an emoji that was mid-eye-roll. You can see the message below. 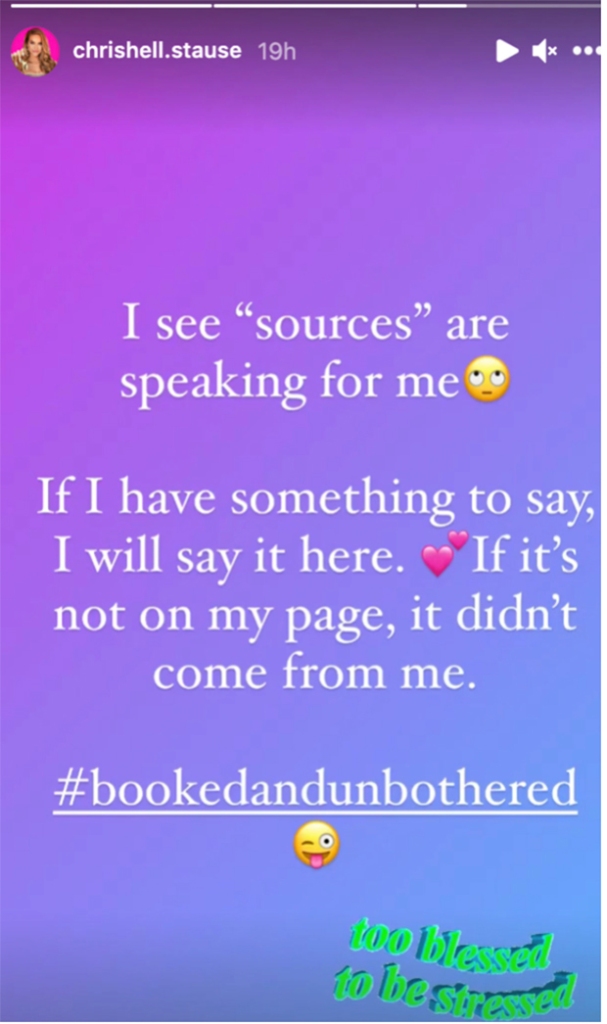 “If I have something to say, I will say it here,” she said, adding heart emojis. “If it’s not on my page, it didn’t come from me.” Chrishell also added the hashtag “booked and unbothered” and included a winking emoji with its tongue sticking out, along with moving text that read, “too blessed to be stressed.”

Chrishell’s response to those reports comes just after her former husband, 44, tied the knot with the Young & The Restless actress. Justin and Sofia made their red carpet debut as a couple at the 2021 MTV Movie & TV Awards on Sunday, May 16, and fans noticed that the two each wore a ring on that finger! By May 17, it was confirmed that Sofia and Justin had exchanged their wedding vows “recently.”

Prior to his recent nuptials, Justin was married to Chrishell. The two wed in 2017 after dating for four years. By 2019, however, Justin filed for divorce, which Chrishell said on season three of Selling Sunset  totally “blindsided” her. “It takes a toll on your soul, where you just feel like…the anger! Like, how could you do it this way? And the sadness, like, I love him so much. This was my best friend,” she said on the popular Netflix reality TV series.

But now, Chrishell really is living her best life. The former actress turned real estate agent is making a return to Days Of Our Lives, appeared on Dancing with the Stars, and is potentially gearing up for the next season of Selling Sunset. Clearly, Chrishell is totally living that “booked and unbothered” life, and it suits her just fine!