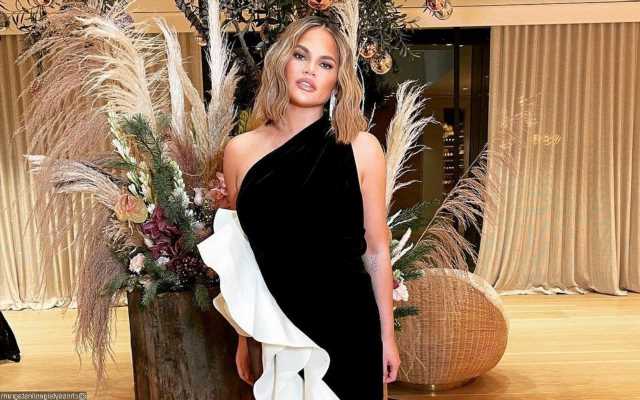 The ‘Chrissy’s Court’ star points out that she’s not against COVID-19 protocols after she feels that TMZ is going to make a story about her not wearing mask during Christmas.

AceShowbiz –Chrissy Teigen is making it clear that she doesn’t want people to believe false stories about her. Taking to her social media account, the “Chrissy’s Court” star stressed that she loves masks and vax after calling out TMZ for allegedly making up a story about her not wearing mask.

On Friday, December 17, the wife of John Legend tweeted, “TMZ just asked me if I’d be wearing a mask at my family Christmas and I said no?” The 36-year-old model added, “And now I feel like I’ve been tricked into a story about how I won’t wear a mask this Christmas.”

“Just know I am pro mask but don’t really wear one inside with my husband and kids I guess?” Chrissy continued. In a separate post, the mom of two further stressed that she’s not against COVID-19 protocols as saying, “Love masks, love the vax, just wanna make that clear! Be safe I love you. Ok bye!!” 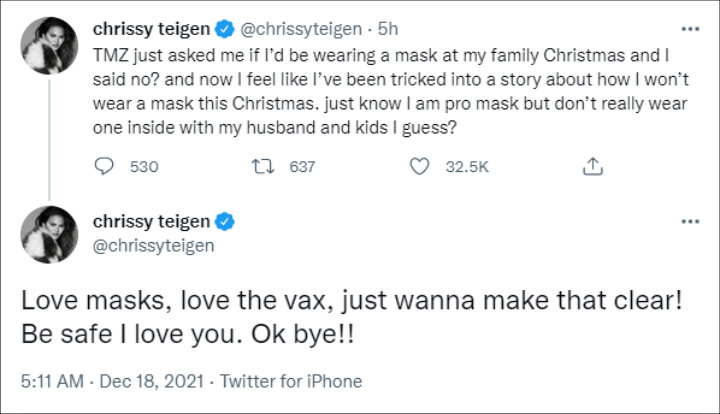 Recently, Chrissy made headlines with her parenting dramas. On December 13, the former swimsuit model “promptly” lost her 5-year-old daughter Luna’s first baby tooth. Taking to her Instagram account, she shared a video of a plumber taking apart the drain pipes under the marble countertop sink to find the missing tooth.

“Luna lost her first tooth and the tooth fairy PROMPTLY dropped it down the sink,” Chrissy captioned the clip. While she was upset over the accident, she found a ray of hope when the plumber busted out a camera to get a better look down the pipe. Along with a black-and-white photo of what appeared to be an inaccessible part of her home, she wrote, “Oh s**t we found it on the camera!” She added, “Praise lord I was so sad.”

Prior to that, Chrissy faced backlash for posting a selfie of herself taking a bath with Luna and her 3-year-old son Miles. In the photo, she had on a full face of makeup and flashed a wide, toothy grin as she dipped herself in the bathtub with her kids. In the caption, she wrote, “Not pictured: endless bickering.”

Chrissy’s post sparked debate over whether Chrissy’s kid-friendly bath was appropriate or not. One person wrote, “Nope! Not appropriate in front of your son!” Others questioned why she would make the photo public. Another Instagram user commented, “Some aspects of your life you should keep to yourself, Chrissy,” while another person added, “Not everything is for the world to see. Smh.”

Meanwhile, some of her fans defended her. “Being naked isn’t sexual unless you do something sexual while naked,” one person argued. “If you think that boy is gonna look at his mom’s naked body and think sexual thoughts then that says more about your depravity than it does anything else. The naked body is natural. Not everything is about sex.”