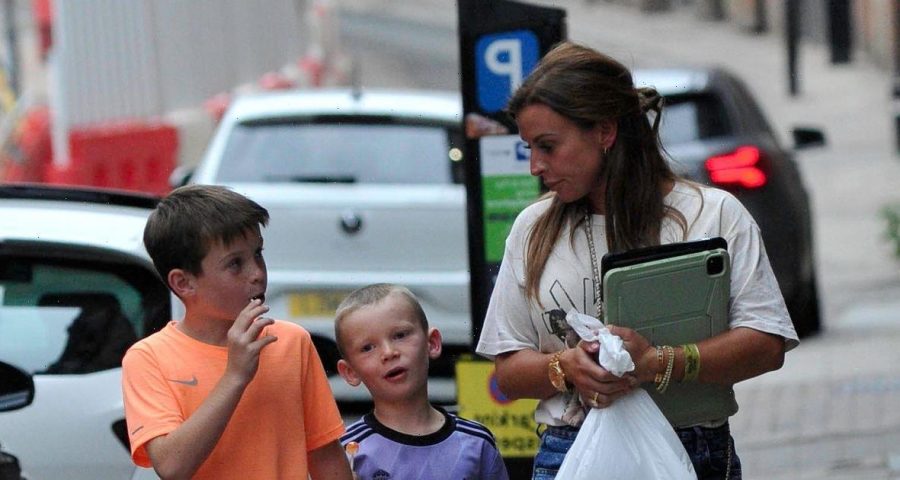 Coleen Rooney has enjoyed a family day out in Manchester alongside her husband Wayne and their three sons, Klay, Kit and Cass ahead of the High Court verdict on the Wagatha Christie libel trial, which is due to be released tomorrow.

The 36 year old WAG cut a relaxed figure as she hit the streets of the city while sporting a slogan t-shirt and pair of frayed denim shorts, as the family headed out to enjoy a meal together.

Doting husband Wayne, 36 also sported a casual look as he opted for an all black ensemble featuring tracksuit bottoms, jacket and black t-shirt. He then completed his look with black trainers and a cap.

Sons Cass, 4 and Kit 6, however, were dressed in a little more colour as they both donned matching football kits in a cheerful shade of purple.

Klay, 9, meanwhile sported a bright orange t-shirt and black shorts combination as he walked alongside his parents.

The couple’s oldest child, Kai, 12, was absent from the outing, which saw the family tuck into a delicious Chinese meal at Wings restaurant in Spinningfields.

The outing marked the first public appearance of the Rooneys since news emerged earlier this week of Channel 4’s intention to turn the legal case involving Rebekah Vardy into a TV drama. The high profile spat has been ongoing for almost three years, culminating in a trial which took place in May.

It began back in October 2019, when Coleen accused Rebekah Vardy of leaking stories about her to the press.

Rebekah vehemently denied the allegations and is suing Coleen for libel.

After seven days in court, the trial was adjourned, with a verdict now due to be passed by Mrs Justice Steyn at 12pm on Friday 29 July.

Coleen and Rebekah, 40, are not expected to be attending court in person and the verdict will be delivered remotely. In his closing arguments of the case, Coleen’s barrister David Sherborne claimed that Rebekah "regularly and frequently" leaked information from his client's private Instagram account and explained that Jamie's wife's evidence is "entirely unreliable”.

He also said that there had been a "deliberate deletion and destruction" of evidence, the court had not heard from key witnesses, including Caroline Watt or the journalists who published the alleged leaked stories, and he said Jamie, 35, had "remained silent… at least in this courtroom.”

However Rebekah's lawyer Hugh Tomlinson argued to the contrary, as he went on to admit that the mum-of-five had "obviously made mistakes", one of which was "trusting someone she shouldn't have" – referring to her former agent Caroline., before insisting she had been telling the truth.