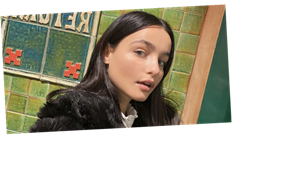 Coronation Street actress Ruxandra Porojnicu has spoken about the gripping storyline she’s currently embroiled with in the soap.

The actress plays the role of Alina Pop on the soap, who has begun a fling with iconic character Tyrone Dobbs, played by Alan Halsall.

Tyrone and Fiz Stape have been together for a long time on the soap, and his affair could spell trouble for the couple.

The Romanian-born 27 year has said her storyline doesn’t just cause trouble on-screen though, and that she’s been branded a home wrecker off-screen because of it too.

Speaking to The Sun, the brunette beauty said: “Fiz and Tyrone are such an amazing and iconic couple, so when I found out what was planned I was surprised.

“And my first thought was, everyone is going to hate me.

“I was very excited about the storyline and thought what a great opportunity it would be to work with two brilliant actors. But as a viewer I was gutted, because I really love Fiz and Tyrone together. I was really torn about it all.

“The way the storyline has gone I’ve found the reactions to be quite mixed, which I was not expecting. The way it has been written created a good environment for Alina to be accepted by the audience. Well, some of them.

“They’ve seen their romance blossom and neither meant for it to happen. I’ve had loads of people saying that they are actually happy for Tyrone.”

The star continued to tell the publication that she’s been told to “go back to [her] own country” as a result of the storyline.

She said: “But I’ve also had people saying, ‘Go back to your own country’, and calling me a homewrecker. I don’t take those comments seriously.”

Ruxandra is a Romanian actress who was born in Bucharest on 5 July 1993.

Prior to joining Corrie the star had featured in modelling campaigns, music videos and adverts.

One look at her Instagram will also show you that she frequently models bridal wear.

Ruxandra is a big reader, frequently posting passages of text to Instagram, as well as poems she has enjoyed.

She uses her platform to support others, sharing information on Black Lives Matter and to assist eco-conservation.

Recently she also ran the London Marathon virtually owing to the coronavirus pandemic.

She did this in aid of The Salvation Army, which assist victims of modern slavery.