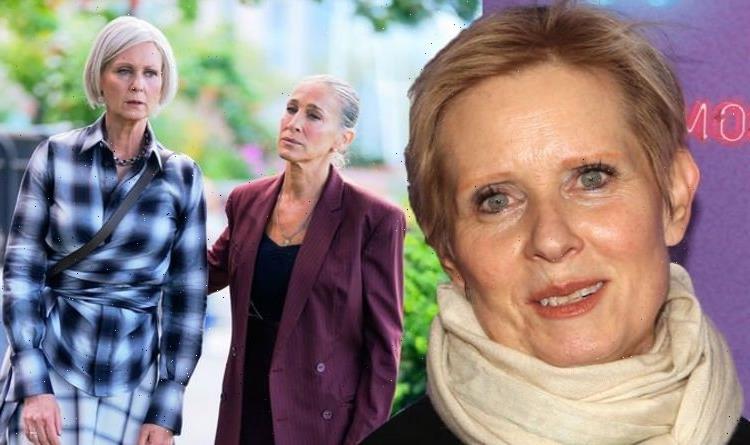 Cynthia Nixon, 55, gained fame from her portayal of Miranda Hobbes in Sex and the City, even gaining a Primetime Emmy Award for her role. However, the actress has now revealed that she only agreed to return to take part in the new spin-off series, And Just Like That…, if it was given a “woke makeover”, as she claimed the original series was “occasionally tone deaf”.

It being occasionally tone deaf on race and gender.

Cynthia has reprised her role as Miranda with her character now going through a “sexual awakening” and embarking on a same sex fling.

The actress herself is happilly married to activist Christine Marinoni, and her child came out as transgender in 2018.

In an interview with News Corp, published by the Herald Sun, Cynthia said: “But the more I talked to Sarah Jessica [Parker], [writer-creator] Michael Patrick King, and Kristin [Davis], about the things that I couldn’t go back without – a real sea change in terms of the lack of diversity in the original series, they were on board.

“I’m very proud of the original series – despite it being occasionally tone deaf on race and gender.”

In a seperate interview with Elle UK last week, Cynthia referred to the new spin-off as “breath-taking”, due to its new non-white and gender diverse characters.

She told the magazine: “It’s part of the reason we wanted to do the show – to go back and [undo] the things that we really got wrong.”

The actress’ real life son Samuel, 23, who she revealed to be transgender back in 2018, was previously mentioned by Cynthia on the Homo Sapiens podcast.

“There was one dad who said ‘At a certain point, the decision seemed to me I could have a dead son or a live daughter’ and it’s like, after you say that, what more is there to say?

“You can make all the arguments that you want… but the fact is, as a parent, as a human, you should listen to what people tell you about themselves.”

Samuel was born Samantha Mozes in November 1996 to Cynthia and her then-partner and college sweetheart Danny Mozes.

Touching on her own sexuality, Cynthia said: “It’s different but it’s the same as when you think about 30/40 years ago and more, the arguments given to gay people that ‘This is just a phase,’ ‘You’re gonna grow out of this’.”

The Sex and the City reboot’s more “woke” story lines have been heavily criticised by fans of the show, with some brutal reviews branding Sarah Jessica Parker’s chracter Carrie Bradshaw’s return to screens “grim”, “awkward” and a “painful downer”.

Critics wasted no time in slamming the show’s lack of humour, overly-woke storylines, and “awkward” plotlines following the premiere of the first two episodes in December.

According to the New York Times, the “cringey” series has “lost its touch”, with writer James Poniewozik claiming that it felt more like two shows than one.

He penned: “‘One, which tries to grow with the women as they navigate their 50s and mortality, is a downer, but it takes risks and in moments is very good,” he wrote.

“The other, which tries to update its sassy turn-of-the-century sensibility for an era of diversity, is painful.”

The Washington Post author Inkoo Kang called the “aggressive and exhausting” show a total “bummer” and a “disappointment”.