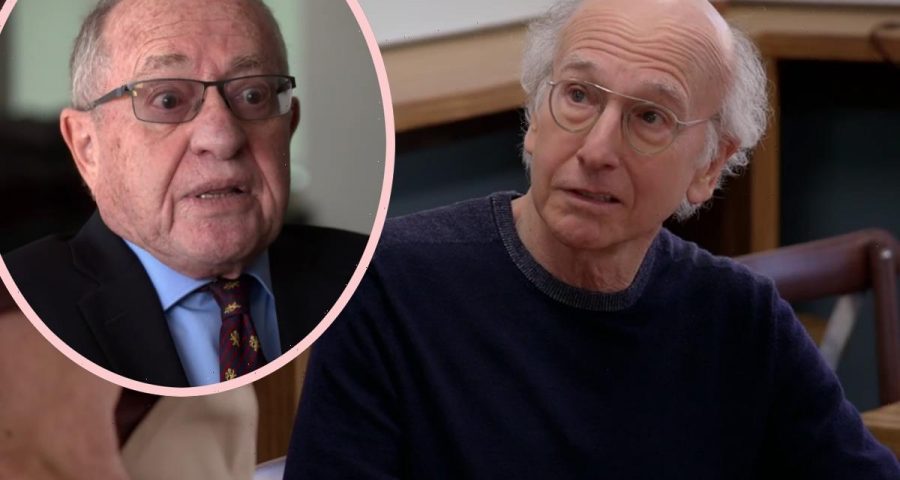 What is it they say? When you lie down with dogs, you wake up with fleas? So you can hardly be surprised when no one wants your gross ass bugs getting on them.

Apparently the great legal mind Alan Dershowitz hadn’t fully considered that when he started inexplicably defending Donald Trump a couple years ago. (Well, we say “inexplicable” – there are theories, but we’ll get to that later…) Anyway, the acclaimed attorney clearly thought he could keep hobnobbing with the crème de la crème on his beloved Martha’s Vineyard even after becoming a mouthpiece for the despised former president and others recently.

Not so much, Alan.

According to a new eyewitness report to Page Six on Thursday, the 82-year-old ran into his old friend Larry David at the Chilmark General Store, the community’s quaint convenience store and social hot spot.

But the Seinfeld co-creator gave Dersh the cold shoulder — which escalated into a heated argument. It was a real-life Curb Your Enthusiasm scene that was so bizarre to see, the witness says, they immediately “wrote it down to remember it.” Ha! They say the exchange went like this:

Dershowitz: “We can still talk, Larry.”

David: “No. No. We really can’t. I saw you. I saw you with your arm around Pompeo! It’s disgusting!”

Ha! Amazing. We can just hear the Curb music as we read it.

“Larry walks away. Alan takes off his T-shirt to reveal another T-shirt that says, ‘It’s The Constitution Stupid!’”

Well, as defiant as you can in a T-shirt anyway — he then reportedly “drove off in an old, dirty Volvo.” You’d think all that blood money could buy him a fancy new car. Huh. Page Six actually reached out to Dershowitz for comment on the incident, and surprisingly enough he confirmed it! In fact, he had a lot to say!

The former Harvard Law professor explained that he and Larry had been friends for years before the recent controversy — he’d even helped one of his daughters get into school and represented him pro bono in a local legal dispute. So when he tried to say hello and Larry walked away, he took it as a deep personal insult. And while he admitted it does kind of sound like a Curb episode, “it wasn’t funny at all.”

The way Dersh put it, the comedian “yelled” and “screamed” at him so much he “was worried that he was going to have a stroke.”

He also defended his work with Trump and Mike Pompeo, saying he would work with any administration on the ongoing struggle to get peace for Israel. He shaded his old pal:

“While he was writing bad jokes, I was helping to bring about peace in the Middle East. What has he done?”

“Larry is a knee-jerk radical. He takes his politics from Hollywood. He doesn’t read a lot. He doesn’t think a lot.”

Damn! OK! Sounds like that bridge is already burned, but go ahead and pee on the ashes, we guess! Dershowitz went on to complain:

“It’s typical of what happens now on the Vineyard. People won’t talk to each other if they don’t agree with their politics.”

Is this just about “politics” though? This wasn’t an argument over trickle-down economics or states’ rights. Trump used racist fear-mongering to try to turn himself into an authoritarian strongman like the dictators he so admires. He doesn’t even have real political beliefs to defend (as his complete about-face on Afghanistan proves), he’s just about grabbing power at any cost, including the destruction of our country’s constitution Dershowitz supposedly loves so much.

Also, it isn’t just about Trump.

That “your whole enclave” line may sound archaic, but it’s actually most telling if you’re up on your current events. Dershowitz didn’t just defend Trump in his impeachment trial, when he was accused of abusing his power by threatening to withhold military aid from the Ukraine unless they helped him win his re-election by announcing they were opening a criminal investigation against his rival Joe Biden.

No, the lawyer also came to the defense of Harvey Weinstein in 2018, notably a Democratic supporter and yet also a total f**king monster.

And, as it’s only recently become well known, Dershowitz was a key attorney for Jeffrey Epstein, helping to negotiate the infamous “sweetheart deal” which kept any and all of the billionaire pedophile’s potential sex trafficking co-conspirators safe from prosecution. (You know, the one that Epstein pal Trump’s Secretary of Labor helped with?) And of course, the attorney himself has also been accused of participating in the assault of an underage girl, something he has vehemently denied and even filed a countersuit over.

So yeah… not just “politics” at play here. Even someone who “doesn’t read a lot” has probably heard enough to form a pretty negative opinion here — enough that they know not to get close enough to be associated with that “whole enclave” anyway.

What do YOU think of this all-too-real Curb-style blowup??