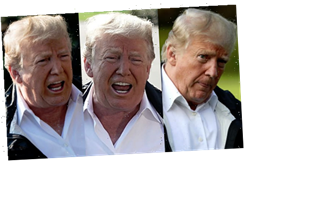 Just hours after armed white insurgents invated Capitol Hill this week in an attempted coup, the Senate reconvened to certify the election results.

Forced to face reality for perhaps the first time in his life, Donald Trump knows that he will soon be out of the White House and vulnerable to prosecution.

With that in mind, he is planning Presidential pardons for his family, other co-conspirators, and even for himself.

Donald Trump’s days of occupying the White House are numbered.

He is just a little over a week away from losing the Presidential pardon power, along with the Executive Privilege that prevents him from being prosecuted while in office.

Though some cowards have suggested that it would be “healing” for the nation to see him get away with his many crimes, he certainly fears that he and his family will face consequences for the first time in their lives.

According to multiple sources familiar with the current occupation of the Oval Office, Trump is readying a list of people whom he plans to pardon.

His goal is to pardon them on January 19, which will be the final full day of our long national nightmare before President Biden is inaugurated.

Senior advisers — those who have not yet resigned — and the White HOuse counsel’s office are currently in the process of vetting these potential pardons.

Donald Trump has already abused the pardon power to allow co-conspirators to escape justice for their federal crimes.

What the staff is discussing now is pre-emptive pardons, shielding his associates from future prosecution before they are even charged, arrested, prosecuted, or convicted.

And the list of these malefactors who may evade justice is lengthy and thorough.

Ivanka Trump, Jared Kushner, both of whom have occupied outrageous White House positions due to flagrant nepotism, are also up for consideration.

Rudy Giuliani, a disgraced former mayor who has been acting as Trump’s personal attorney, may also be in the running.

Trump has reportedly floated the idea of a pardon for Kimberly Guilfoyle, a former Fox News host who left the propaganda network amidst accusations of sexual harassment.

She has been dating Donald Trump Jr., giving her access to the broader Trump crime family and giving her an income paid for by Trump’s campaign donors.

Albert Pirro, the ex-husband of Jeanine Pirro, previously worked with Trump on real estate deals before he was convicted of tax fraud. Trump is considering a pardon for him as well.

The other pardons are of concern to some members of Trump’s legal team, who note that some of these pardons could constitue obstruction of justice.

Additionally, because a pardon shields the recipient from prosecution, they cannot plead the Fifth Amendment right against self-incrimination … and could be forced to testify in federal court, including against Trump.

Which of course brings us to the biggest question: Can Donald Trump pardon himself?

These are untested waters, and for good reason — because the United States has never faced this exact scenario before.

There are legal arguments on both sides.

On the pro-side, some argue that the Presidential Pardon Power is deliberately broad.

It’s only real limitation is that it extends only to federal crimes. It cannot help you with state or local offenses.

Additionally, because the Constitution does not specifically address this question in etiher direction, proponents argue that it’s not forbidden, and thus is legally sound.

On the con-side, pardoning is in and of itself considered to be something that one person does to another.

Additionally, there is a strong legal principle in our nation of one not being the judge of their own trial, for example.

As we noted, these are untested waters. The idea of a self-pardon could have long-term negative impacts upon political confidence that echo decades from now.

Since Donald Trump does not have the moral or cognitive capacity to appreciate consequences or care about precedent or the future of these United States, he may very well try it.

The only risk to doing so, from his perspective, is that if it doesn’t pan out, he may have passed on his best chance to avoid federal prosecution.

If Trump were to resign before the end of his term, Mike Pence would temporarily become acting President.

As President, Pence could then pardon Donald Trump for any and all federal crimes committed before he took office and while he was in office.

Would it be ugly and unjust? Of course. But that would fit the tone and appearance of everything else about this administration.

Trump may not do that, in part because it is unclear if he trusts Pence to actually pardon him. Another factor is that Trump is afraid of being seen as a “quitter.”

Either way, there are attorney generals and district attorneys in this country who are chomping at the bit with eagerness to prosecute Trump for non-federal crimes.

Trump has gotten away with too much for us to feel confident that he will finally be brought to justice, but seeing him carted to prison could be cathartic for tens of millions of Americans.