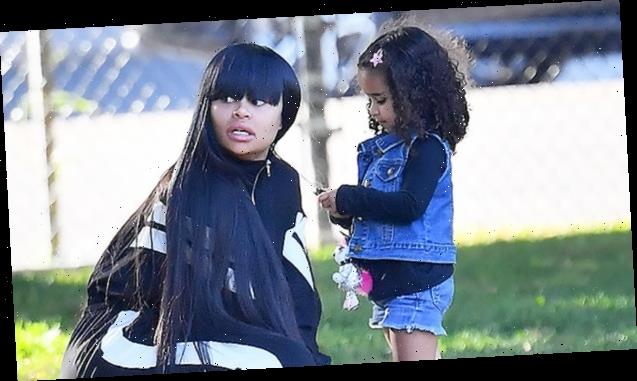 Blac Chyna, 32, and her adorable daughter Dream Kardashian, 4, were up to some “spring break shenanigans” when busting dance moves to various tunes on Mar. 28! The doting mom took to her Instagram story to share a series of clips of her and the talented tot dancing in a kitchen as a bunch of couches were put together in front of them. She wore a white graphic T-shirt, tan and brown patterned leggings, and a white baseball cap during the memorable moments and little Dream wore what appeared to be long-sleeved light pink zip-up pajamas.

The girls hopped around while swinging around their arms and legs and shaking their hips during the entertaining dance moves. At one point, they even jumped onto the couches while bouncing around with a ton of energy. Chyna couldn’t help but laugh at the end of the clip as the person filming also laughed.

“We all chillin (it’s the outfits and no wig,” she wrote in the caption of one of the videos. “We put all the couches together,” she wrote in another along with laughing emojis. “I hit that stop playing,” her cheeky third caption read.

Before the latest dance party clips, Dream made headlines for getting adorably frustrated at her big brother King Cairo, 8, in a video Chyna filmed and shared last week. The siblings were discussing Dream’s glittery shoes and after King told her she wouldn’t be wearing them when they hit the pool later, she couldn’t help but yell, “I wear them outside to a pool party!” It seemed to be a funny and silly moment for Chyna who laughed and shrugged at the camera.

When Dream’s not disagreeing with her older bro, she’s having a blast matching outfits with her mom. They wore pink jumpsuits while posing and smiling in a pink-lined Rolls Royce in videos that were posted by Chyna earlier this month. They also played a game of Rock paper scissors while laughing and the loving model added a caption calling Dream, whom she shares with ex Rob Kardashian, 34, her “best friend.”