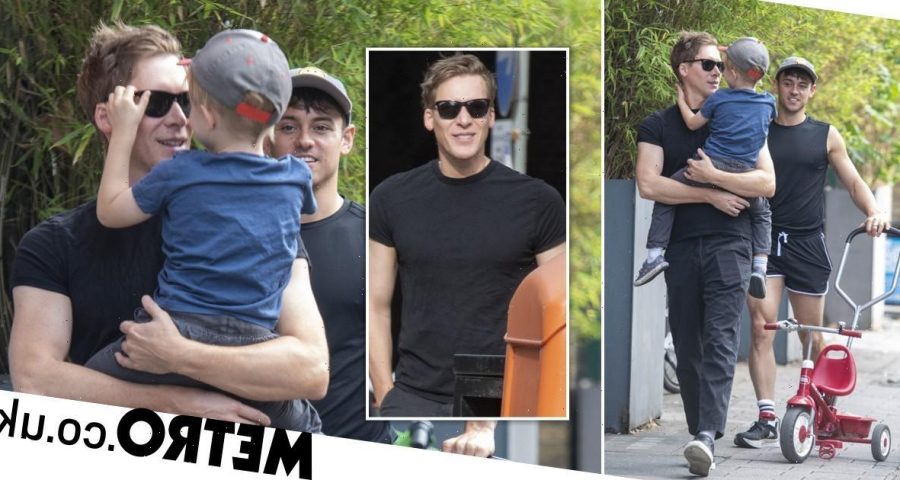 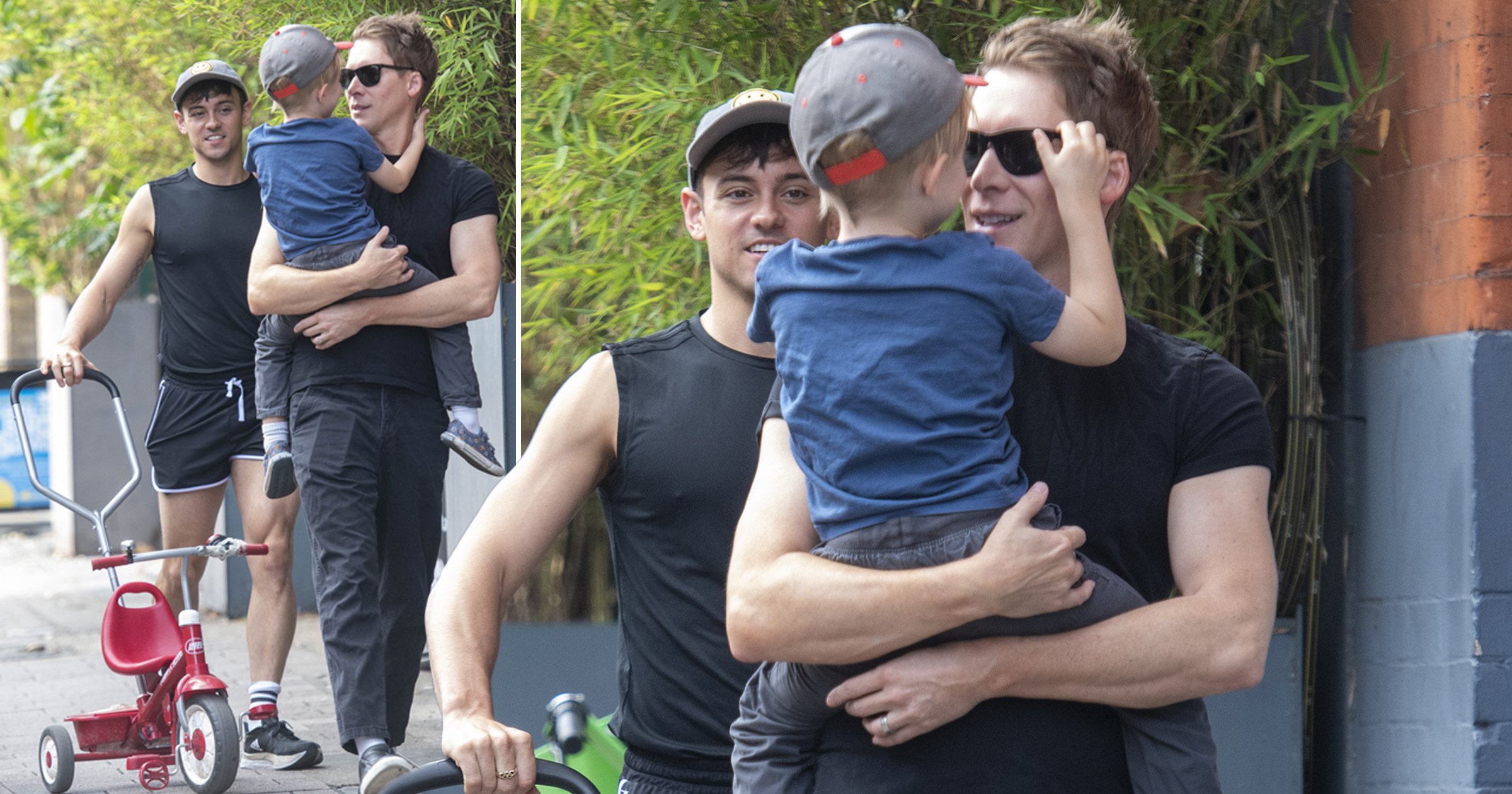 Dustin Lance Black appeared in good spirits on Friday as he emerged with husband Tom Daley after ‘calling the police’ following an alleged altercation in a Soho nightclub.

Police were called to Freedom in central London after screenwriter and director Dustin, 48, was apparently involved in a fracas with an events promotor.

However, today the pair, who share four-year-old son Robbie, headed out in the sunshine, with Tom wheeling along a small tricycle and Dustin doting on the small child.

Dustin had reportedly called the cops after getting into an altercation with BBC3 star Teddy Edwardes, 32, at Freedom, where he was on a date with his Olympic diver husband, Tom, 28, in the early hours of Thursday.

However, Dustin is alleged to have called it a ‘targeted attack’ and called the police.

In a statement to Metro.co.uk, Met Police said: ‘At 00:19hrs on Thursday, 18 August police were called to a licensed premises in Wardour Street, W1 following reports of an altercation between two customers.

‘Officers attended and spoke to those involved.

‘Both parties, a 48-year-old man and a 32-year-old woman, made allegations of common assault.

‘There were no reports of any injuries and no arrests. Enquiries are ongoing.’

Tom and Dustin had dinner at Avo Mario and watched a drag show at Chinatown’s Ku Bar before going to the bar.

According to Teddy, she invited them to sit with her but Dustin became upset after she asked a stranger who joined their table to leave.

In a series of videos on her Instagram Stories, Teddy alleged on Thursday: ‘I went out for a couple of quiet drinks with some friends last night, nothing crazy and I bumped into Tom Daley and his husband in Soho, who pretty much unprovoked he threw an entire drink over me in Freedom.

‘I didn’t have a drink to throw back so I did choose violence, but I wasn’t that violent he got a little tap on the head.

‘Tell me why he is crying outside saying it’s a targeted attack and he’s traumatised and called the police, so I have to wait for hours and now I have been cautioned and have to go in for interviews.’

She added: ‘For everyone asking what happened, we basically invited them to where we were sitting and I bought them some drinks etc, everything was fine.

‘And then this random guy came and sat with us and my friend said they felt uncomfortable because they didn’t know who it was so I asked security if they could move them on.

‘The security came to move them on and Tom’s husband started going mad saying how unwelcome I’ve made him feel and that he was leaving, so I was like OK? If that’s what you want? Then got straight drink to the face.

‘I have to add that Tom Daley was lovely throughout he was just trying to diffuse the situation.’

A source close to Tom and Dustin claimed to The Sun that Dustin was ‘punched in the back of the head’, telling the publication: ‘Tom and Lance were out on a date night without Robbie. They went to Freedom after dinner.

‘Someone punched Lance in the back of the head, the person who punched him was removed from Freedom by security who checked CCTV, it was reported to police who are looking into it.’

Further addressing the situation on Friday morning, Teddy wrote on Twitter: ‘I won’t be accepting the caution for everyone asking and will be filing a victim statement.’