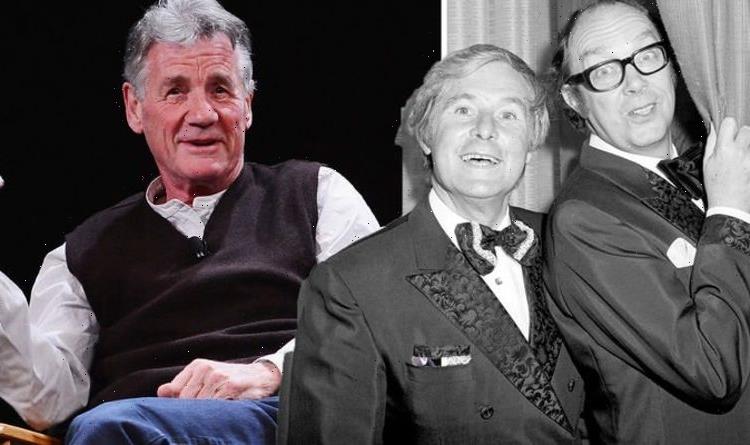 The late comedy duo Eric Morecambe and Ernie Wise revealed that they were “bored stiff” while watching Monty Python sketches. In an unearthed TV interview from nearly 50 years ago, the pair made the bold claims about the comedy troupe, as well as branding them “irritating” and “unprofessional”.

It’s the bit in the middle I don’t like

Wearing a smoking jacket and his signature glasses, Morecambe puffed away at a cigar while being quizzed about his thoughts on the popular show.

When asked what parts he liked, he bluntly admitted: “The opening and the finish.”

Wise, on the other hand, cut a much smarter figure with a jacket, shirt, and tie, as he shared his thoughts on the comedy troupe.

He said: “At times there’s five or six minutes of utter boredom. And then there’s three minutes of very funny and then another eight minutes of boredom.”

Morecambe then cut in, likening the cast’s performance to “unprofessional” comedy.

He explained: “The way I feel about it is that it’s, what they give you, for want of a better expression, is university comedy.

“Or college comedy or whatever you want to call it.

“And that’s what they give you. And I’m afraid a lot of it is very unprofessional.”

He went on to admit that their sketches “bored him stiff” and even annoyed him at times.

He confessed: “And this irritates me being a professional.

The comedy legends made the comments during an interview with University of East Anglia’s TV station, Nexus, 48 years ago.

At the time, Morecambe and Wise were backstage at Norwich’s Theatre Royal during a four-show run.

The clip of the pair was put onto a VHS tape in 1983 and kept in the Nexus studio until 2000; it was only digitised this year.

The footage has since been shown to Sir Michael Palin, who starred in Monty Python and grew up watching Morecambe and Wise on stage.

Addressing the comments, the actor told how he “wasn’t surprised” at the couple’s negative review and admitted he was “a little hurt”, according to the BBC.

He said: “It was a very interesting little interview.

“Though the quality wasn’t great, you got exactly their feelings.