The 100th episode of Bunk’d is premiering THIS WEEK and we have an exclusive clip from the episode right here on JJJ!

In the new episode, “Gi Whiz,” which airs Thursday (June 3), Finn and Destiny look for a way to leave their mark on the camp; while meeting Matteo’s mother, Lou and Noah discover that he has a surprising skill.

The exclusive clip features Will Buie Jr and Mallory James Mahoney as Finn and Destiny, as well as Trevor Tordjman as Parker and Shelby Simmons as Ava, and sees Finn and Destiny trying to light up the skies at Camp Kikiwaka.

We also have a fun infographic map of the layout at Camp Kikiwaka, which was created to celebrate Bunk’d‘s 100 episodes. Check it out below! 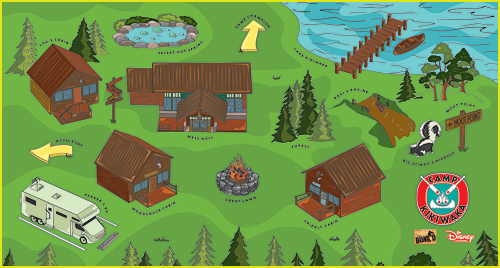 Bunk’d is kicking off summer with a week of premieres, starting TONIGHT (May 31), with new episodes airing all week at 8pm ET/PT on Disney Channel. Be sure to tune in to watch, as well as catch the series’ milestone 100th episode, titled “Gi Whiz,” airing THURSDAY (June 3)!

If you missed it, find out more about all of the new episodes that are airing this week.