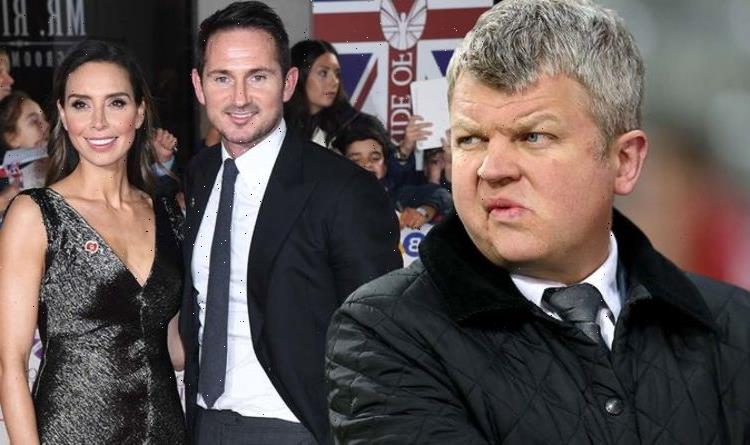 Christine Lampard and Adrian Chiles left the BBC to join ITV’s Daybreak in 2010, which left them subject to scrutiny. However, after the pair were dropping from the morning show the following year, Adrian, 54, refused to go down without a fight and became embroiled in a public row with the broadcaster.

Despite her willingness to stay out of the conflict, Christine, who was then dating Chelsea star Frank Lampard, became caught up in the spat.

Addressing his and Christine’s sudden departure from the breakfast show, Adrian told The Sunday People newspaper: “We were assured we could go with our dignity intact. That’s obviously not happened.

“We were enjoying the show and we thought things were going well. We didn’t want to go.”

He added: “It was a bolt out of the blue and has come as a big blow to our careers that we’ve been dumped at this time.

“Dark forces have leaked it for their own ends and I am mightily unhappy about it.”

In a new interview for the Sunday Telegraph, the Loose Women panellist, 42, explained her now husband’s concerns over the scandal’s emotional toll.

The news outlet reported: “A protective Frank, whom she met at the Pride of Britain Awards in 2009, when they were introduced by Piers Morgan, was very concerned that she would be traumatised by the negative press.

“But she told him, ‘Touch yourself. Touch me. We’re still here. This is real.

“‘Let’s just move on and smile about it. No one has died. It’s just showbiz – let’s focus on our lives.’”

She has been open about her marriage and admitted she initially “dreaded” being questioned by people about having children, as “nothing was happening” despite the couple’s efforts to conceive.

She told the same publication: “I did wonder if I would ever be able to get pregnant. I was asked that question so many times and I just felt uncomfortable.

“I felt if it was going to happen, it would happen, but if it didn’t, then I would just accept that.

“I had friends who were going through IVF and I knew how traumatic that whole journey could be. I didn’t think I had it in me to go through that.

“Frank and I had a great life, we went out a lot, travelled and I had a lot of focus on his children – not being a replacement mother, but a friend.”

Despite fears she may not be able to conceive, Christine fell pregnant in 2018.

“Frank was away working and it took everything not to call and tell him.

“I wanted him to be able to be in the moment completely, not at work. He was absolutely thrilled.”

The couple are now parents to two-year-old Patricia and Freddie, with Christine announcing the news she was pregnant again with her son last year.

In an Instagram post shared with her fans, the star said: “A new year and a new baby on the way for the Lampards!

“It’s been a strange and worrying time to be pregnant but we’re hoping and praying that cuddles from family and friends are not too far off. Sending all my love to everyone going through pregnancy during this crazy time.”