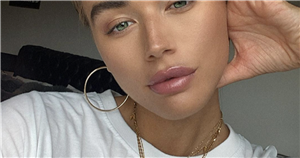 But some are raking in a fortune by selling sexually explicit content via the online subscription platform OnlyFans.

Sexpert Mistress Harley said: “Reality TV stars find themselves with an online following and of course want to cash in on their fame, even if it is short lived.

“Especially women, who are are immediately flooded with requests for nude photos and the like.

“I would say in the first month it's not crazy to think they might be pulling in £10,000 for the most attractive stars, however those nudes get leaked fairly often and quickly so I doubt they continue to make as much money in the second or third month once everyone has seen everything.”

Here are the former Love Islanders who've turned to OnlyFans…

Megan Barton-Hanson, 27, told Vice she was “disappointed” with the recent news that OnlyFans will prohibit sexually explicit content from October under a new Acceptable Use Policy.

While the reality star described the move as putting sex workers “back at square one” in their quest to remove the stigma around sex work, she is no doubt set to lose out on vast sums of money under the new rules.

Megan’s OnlyFans costs subscribers $24.99 per month, with 281 photos and 70 videos currently available on her page.

According to The Mirror, the Love Island series four star brings in £807,559 a month via the platform, having established a career as a sex-positive influencer.

After finding fame with Love Island in 2016, the 25-year-old star took to Instagram to promote her OnlyFans wearing leather lingerie.

The former glamour model has a personal and a couples OnlyFans account, although it seems that the latter is currently inactive.

You can subscribe to her personal page with 198 photos and 36 videos for free, but you have to pay to unlock posts, with prices ranging from $40 per video to $3 for sexually explicit photographs.

After leaving the reality show, Katie established her own clothing line Prodigal Fox.

Model Arabella Chi, 30, took to Instagram to share a snap of herself in a revealing corset as she promoted her OnlyFans page.

The fifth series star’s page costs $12.99 per month for subscribers, with 122 images and 9 videos available.

The beauty has continued to model and do the rounds at PR events since leaving the reality show.

The series one star made a name for herself after agreeing to marry Jon Clark, her boyfriend of five weeks on Love Island.

Her OnlyFans subscription costs $14.99 per month, with 756 photos and 116 videos available on her page.

While her onscreen romance didn’t last, Hannah, 31, didn’t lose sleep and returned to her career as an international PlayBoy bunny after the show.

A subscription costs $11.99 per month, with 226 images and 194 images on his page making him one of the most productive former islanders.

The 29-year-old Welshman is currently dating Married At First Sight Australia's Tamara Joy, who has relocated from Wales to Australia to live with him.

At just $7.99 a month, athlete and business owner Adam’s OnlyFans subscription fee is among the cheapest from former Love Island stars.

The 25-year-old personal trainer from Newcastle starred in the forth series of Love Island, and has 54 photos and 9 videos on his page. He asks fans to ‘tip’ him if they wish to see more via DM.

The 27-year-old Josh’s OnlyFans page is currently offering fans 80% off for 31 days, although the regular subscription price is £14.99 per month.

His account has 90 photos and 23 videos available to fans who want to see all of him.

The television personality was a series one finalist, who later appeared on Celebs Go Dating.

For all the Love Island news, sign up for OK! 's daily newsletter here.