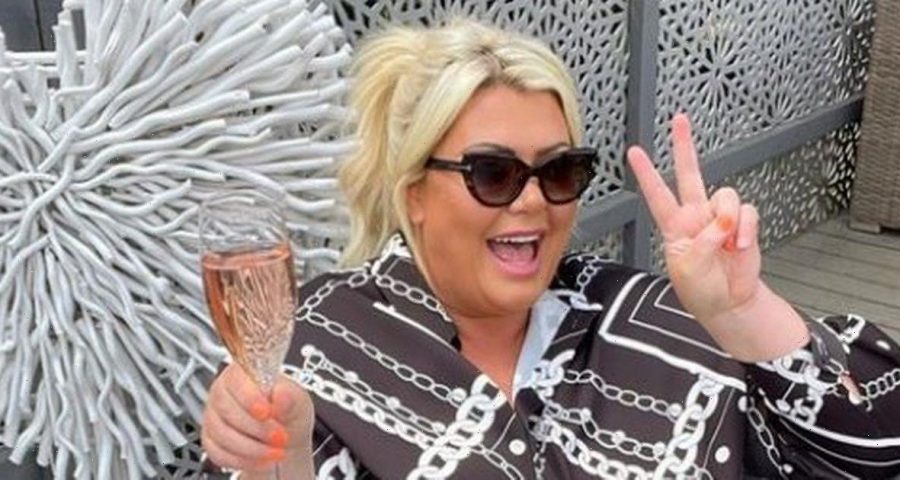 Gemma Collins has been compared to Alicia Silverstone's Clueless character after she posted a throwback snap to her Instagram.

The reality TV personality, 41, shared the photo on Tuesday showing, and the snap shows her in a glittery mini dress and opera gloves, as well as opting for bright red lipstick and smoky black eye shadow.

Gemma's dark blonde tresses were styled in a slick straight style, combed over to one side, and Gemma completed the look with glittery scarlet shoes.

The TOWIE star posed for the camera with an alluring and mysterious expression, dramatically running one of her hands through her hair.

She captioned the post "WHAT A THROW BACK" and shared it to her 2.2 million Instagram followers, who were quick to show their love.

It is not known when the photographs were taken, but commenters were quick to make comparisons to Alicia Silverstone – especially her character in 1995 film Clueless.

One person wrote "Cher from clueless vibes" while another said: "Thought you were Alicia Silverstone!!"

A third penned: "I thought it was a picture of Cher from Clueless" while a fourth commented: "@gemmacollins this is giving me @aliciasilverstone vibes."

Other followers were quick to shower her with compliments, with one person writing "Beautiful then, beautiful now" with a heart eyes emoji.

Another wrote "Those legs gal! Beautiful lady all your life" while a third said "Younger GC slaying" with fire and clapping emojis.

Recently, Gemma spoke exclusively with OK! about her work on Springwatch as well as the "snobbery" she faces in the entertainment industry.

“There’s still so much snobbery. There’s a real snobbery that ‘oh you’re a reality star’, so we’re going to put you in that box,” Gemma told us.

“I ain’t a reality star darling, I’m a megastar. I have smashed it with everything I’ve done and they can’t keep pigeonholing me forever. I’m a very successful woman.”

Beaming with pride at the memory of her time on Springwatch, she said: “It was such an honour to work with Chris Packham and the guys on the BBC Springwatch. It’s the best thing I’ve done all year.

“I have such a passion for it, but again it’s that attitude of ‘Oh she’s a reality star, we can’t put her into gardening shows’.

"But the thing is, I’m not a reality star anymore. At the end of the day, I’ve grown.

"And thinking outside of the box, I could be the one to get youngsters into it. Up until now it’s been a bit of a subject for the old swiffies, but I could change that.”

While the executives themselves may not be quite ready to take a chance on Gemma’s green thumb, the gardening world itself has welcomed her with open arms, including a few famous faces.

“I’ve got to say, the gardening world has been very receptive to me,” shared Gemma.

“Garden Ninja Lee came on my podcast and we’ve got a great friendship. Chris Packham, Michaela Strachan, Chris Packham’s daughter, Hannah. People, especially from the BBC have been really on board with it so let’s see what happens!”