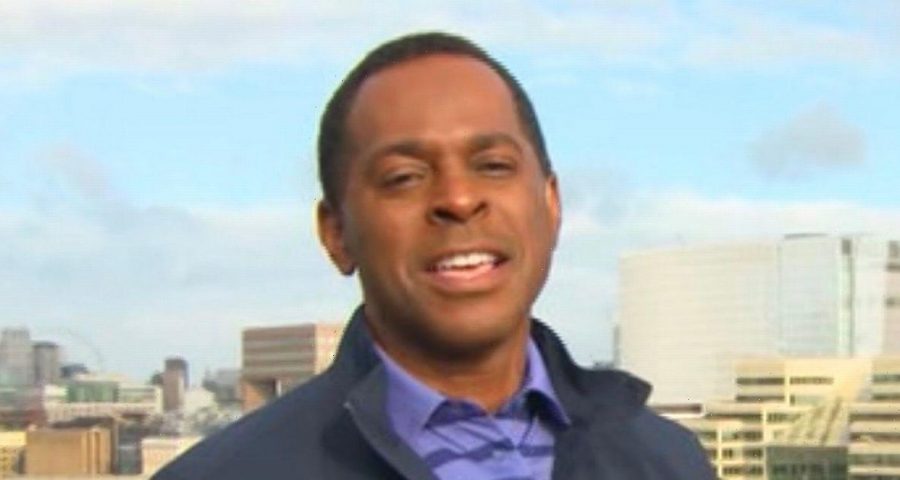 The acting star, 56, has appeared in huge hits The Night Manager and Homeland but all the attention was on Andi Peters, his well fitted shirt and biceps.

Andi, 51 is presenting the show as part of a Christmas schedule shake up, where the TV veteran is sitting in for Susanna Reid, Richard Madeley and the rest of the regulars.

While Andi interviewed David on Thursday's show, the actor instead found himself noticing the presenter's impressive physique.

David felt compelled to share his observation and chuckled: "I have to say you're looking very hench since I last saw you back in the day."

Andi has had a stellar career presenting iconic programmes in the 90s including Live and Kicking and now he regularly posts workouts on his Instagram page.

David noticed a remarkable change in the TV legend and pointed out: "Those sleeves of yours are looking packed with prickling muscles. Wow look at that!"

The cameraman, presumably called Darren, then zoomed onto the morning presenters biceps that were bulging out of his relatively tight light blue shirt.

The 90s children's TV presenting legend then cried: "Get off, get off Darren!"

Andi then acknowledged the praise from his actor guest and graciously said: "Thank you very much."

The playful personality of Andi, who is no stranger to getting the giggles on the show, is perfect for this time of year but comes at a time when ITV's bosses had to make some serious calls.

Good Morning Britain bosses decided to cancel the show between Christmas and the new year, amid concerns from staff and the rest of the crew about the Omicron variant.

Announcing the decision, a Good Morning Britain spokesperson said: "Due to the pandemic, we have introduced some changes to protect our team both on and off screen."

The show is now joined with breakfast morning regular Lorraine, to form a breakfast TV super-show over the festive period.

A spokeswoman told The Sun: "There is a special GMB Christmas Day show which airs from 7-9am.

"GMB was due to be on air from Weds 29th – Fri 31st December 2021 but due to the pandemic and to protect our teams, we have decided to give them an extended break.

Get all the latest Good Morning Britain news straight to your inbox with the OK! newsletter