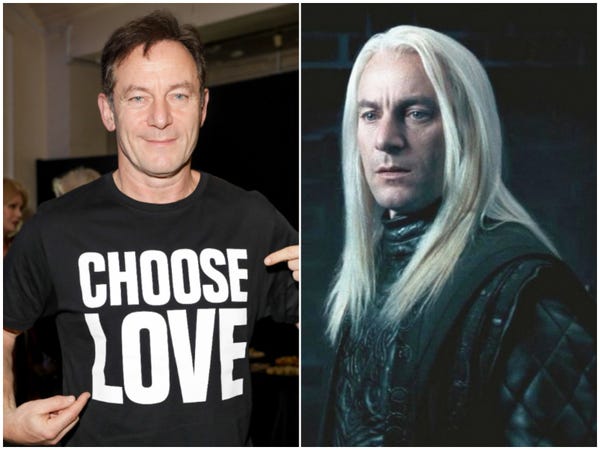 Isaacs, who is best known for playing Lucius Malfoy in "Harry Potter," was appearing on the British daytime chat show "Lorraine" on ITV to speak about his struggles through the pandemic and his return to work on the set of Netflix's "Sex Education."

Isaacs told host Lorraine Kelly: "The thing about masks is, somehow I'm made less annoyed by the people who refuse to wear masks, who I think should be in the stocks or prison, than by the people who are wearing it with their nose sticking out."

Isaacs continued: "We all know that you transmit and receive it more through your nose. And what about the people who I'm talking to who pull it down to have a chat and put it back up again?"

"They should be hanging in the streets," Isaacs concluded.

According to the WHO guidelines, face masks should always be worn over your nose and over your mouth and there should be "no gaps between your face and the mask."

Isaacs said that he has found it "very hard" to "keep your spirits up" during lockdown, and that the only way he has found to do this is "to help people." Isaacs did say, however, that he got to go to a set recently — "Sex Education." The Netflix show is shooting its third season, which Isaacs is joining as Peter Groff, the "cocky and more successful older brother" of Mr. Groff, according to Deadline.

"It was great and fun and really weird," Isaacs said.

Isaacs also teased a potential new podcast with his former "Harry Potter" costar and onscreen son Tom Felton, who played Draco Malfoy in the film series. Isaacs and Felton are good friends off-screen, and Isaacs told Kelly that he and Felton are considering teaming up for a new project.

"He's never seen the films of my generation and I've never heard the music of his generation so we were thinking of doing a podcast where we force each other, cross-generationally, to catch up," Isaacs said.