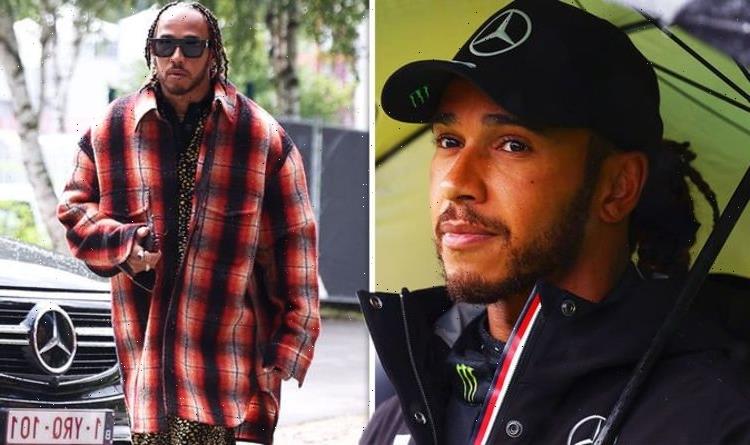 Lewis Hamilton, 36, has taken to Instagram to thank his loyal fans for their support, while praising them for continuing to cheer him on “alongside a lot of people who boo me”. The F1 champion spoke out after he opened up on his “struggles” with his Mercedes during his Belgian GP qualifying yesterday.

In view of his 23.5 million followers, Lewis penned: “I’d like to just thank each and every one of you here at the race supporting me #teamlh.

“I know you sat in the rain all day and it’s miserable but knowing you are here encourages me to push and never give up.”

Hitting out at his critics, Lewis added: “I also know you stand alongside a lot of people who boo me and have hate in their hearts towards me so thank you from the bottom of my heart for sticking with me.

“Love conquers all and we gotta whole lot of love to give.”

Lewis also took to his Instagram feed to speak out on the tricky weather conditions he faced during the race.

Alongside a photo of his car, Lewis admitted: “Today was one hell of a ride.

“Honestly so slippery, low grip and challenging in terms of timing. Fun nonetheless.

“Great job from the guys ahead. Tomorrow’s another day.”

Fans took to the comments section of the star’s post to send him supportive messages.

One person wrote: “No sweat. Tomorrow you’ve got this. Show em why you’re the rain master.”

Another added: “not an easy day to handle but full focus on tomorrow. sending you all the love.”

A third fan commented: “Cheering you on from gold 1 Champ don’t listen to the haters let’s go get them tomorrow.”

A fourth penned: “You did a great job today. Good luck tomorrow!”

He finished in third place behind title rival Verstappen, despite often performing well in wet conditions.

Detailing the difficulties he faced, Lewis told Sky F1: “A real struggle for us without car today, as you’ve seen with Valtteri as well.

The star continued to explain: “There’s just not a lot of grip out there for everyone and there are people out there with different downforce levels.

“We tried to find the best compromise, the best balance, for both potential circumstances today and tomorrow in terms of dry and wet.

“We’ll see how the weather is tomorrow and see how it works.”