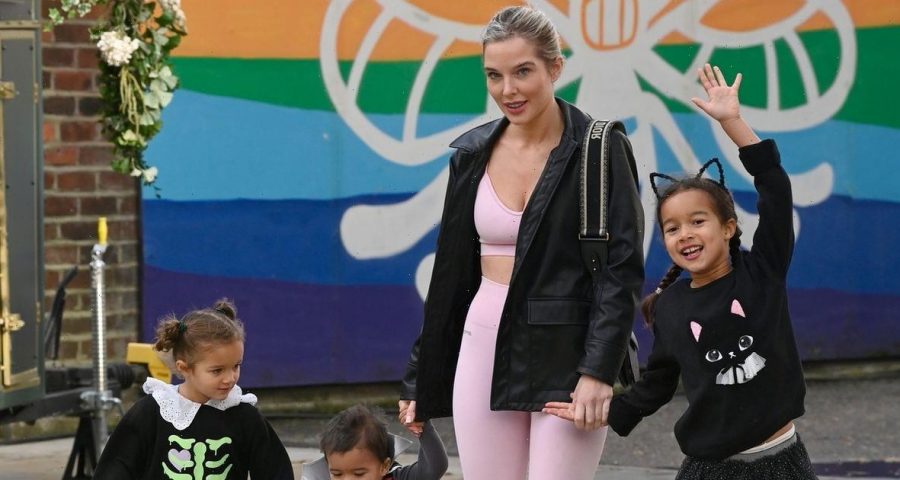 Former Coronation Street star Helen Flanagan has been enjoying Halloween with her three children, amid rumours of a split from fiancé Scott Sinclair.

Helen, 32, and her three children had an enjoyable afternoon as they attended The Pumpkin Village Kids Party at Menagerie in Manchester.

While her children dressed up for the occasion, as a vampire, a cat and a skeleton, Helen opted for a casual look as she sported a light pink cropped top and leggings.

She teamed these with a black leather coat, Dior shoulder bag and some black leopard print trainers. Keeping her look fairly relaxed, the actress tied her blonde hair back in a ponytail.

The family outing comes amid rumours that Helen has split from fiancé, Bristol Rovers footballer Scott Sinclair after 13 years together.

"They hit a rough patch in the summer and after Helen came back from South Africa it ended for good."

Helen and Scott announced their engagement back in 2018, with the footballer getting down on one knee during a trip to Disneyland Paris.

Helen, who was heavily pregnant with the couple's second child at the time of the proposal, had been dating Scott for nine years at the time and was eager to tie the knot with her beau.

She told OK! at the time: "I've pointed Scott in the right direction for an engagement ring. We've been together for nearly nine years and we'll soon have two kids, so it's about time."

The pair soon welcomed their second child and began planning their perfect wedding day, and despite deciding on a provisional date in 2020, their plans were delayed and they never made it down the aisle.

Earlier this year, Helen revealed that she and Scott had finally booked to get married in 2024, after finding the perfect venue.

The mum-of-three told The Mirror that she had been extremely "picky" when it came to choosing a venue, and admitted that both she and Scott had been "laid back" about their wedding preparations.

"I've been with Scott since I was 19, I'm 32 now, so I think we are probably a little bit laid back because it does feel like a marriage anyway."