Fox News Flash top headlines for May 17 are here. Check out what’s clicking on Foxnews.com

There’s a reason why Helena Christensen is still celebrated as one of the most iconic supermodels from the ‘90s.

The cover girl, now 50, proved she’s still got it by proudly flaunting her beach bod recently on Instagram during a tropical getaway.

The Danish beauty looked seductively at the camera while rocking a low-cut V-neck deep violet one-piece swimsuit. Christensen’s beachy brunette tresses cascaded down her sculpted cheekbones as she expertly accentuated her whittle waistline.

The stunning snaps come after Christensen spoke out when a former fashion editor claimed she was “too old” to wear a bustier.

In April, Christensen went on Instagram to share a photo of herself posing alongside two pals proudly wearing the same form-fitting black garment that became the subject of an online article that weekend.

"Let’s continue to elevate and support each other, all you beautiful, smart, fun, sexy, hard working, talented, nurturing women out there ❤️💜 #ooopssheworeabustieragain 😱@camillastaerk @talilennox," she captioned the picture. 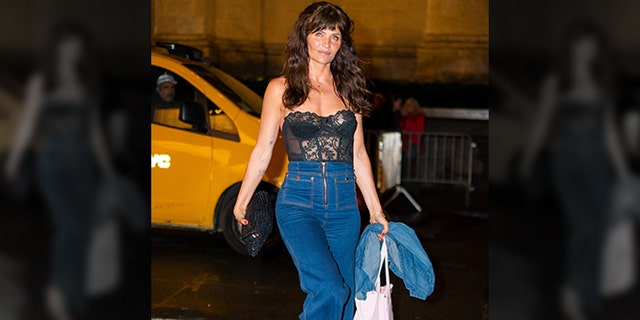 The supermodel's remarks come after former editor-in-chief of British Vogue, Alexandra Shulman, penned a piece for the Daily Mail, where the headline read: "ALEXANDRA SHULMAN'S NOTEBOOK: I’m sorry Helena Christensen, you ARE too old to wear that."

In the article, a photo of Christensen – wearing a black bustier paired with high-waisted jeans – is included. Christensen was attending fellow model Gigi Hadid’s 24th birthday party last week when she was photographed.

"Helena Christensen is usually the most stylishly understated of the supermodels," Shulman wrote. "At the peak of her career, she always looked utterly scrumptious in a simple dress and flat shoes, wore no make-up and liked to hang out with girlfriends."

"So why last week, at the age of 50, did she decide to pitch up at Gigi Hadid’s 24th birthday party in a tacky, black lace bustier?" Shulman ends her second graf.

Further down in her article, Shulman also states: "Something you wore at 30 will never look the same on you 20 years later. Clothes don’t lie."

After winning the Miss Universe Denmark crown in 1986 when she was just 17, Christensen kicked off her modeling career, going on to become one of the most in-demand models in the world in the ‘90s. Her resume includes campaigns and runway shows for Chanel, Prada, Victoria’s Secret and Valentino.

A rep for Shulman did not immediately respond to Fox News' request for comment at the time.

Back in 2017, Christensen spilled plenty of secrets to Harper’s Bazaar about how she stays in camera-ready shape all year long. And aside from possessing gorgeous genes, Christensen said she wasn’t afraid heat things up.

“I recently started pole dancing,” she told the outlet at the time. “It is the hardest physical activity I have ever done in my life and I have so much awe and respect for pole dancers. It’s like virtual ballet to me, so the perception of it as seedy doesn't even annoy me; it goes right over the top of my head. To people who think like that, I want to say, 'well, you just go try it.'"

Christensen also said she relied on boxing to not only make her feel strong but also stay in incredible shape.

"For me, working out is about instant gratification; I want to see changes if I’m going to put the effort in!” she explained to the magazine. “My thing is boxing — I like to feel strong. Boxing might seem like a male-orientated sport but there are as many women where I go and that is a very authentic, sweaty club. It’s a little gym in New York, where they train a lot of the champions, and my trainer’s name is Jason Lee. I don't want to reveal its name, though, as then all the models will come and I'll be like, 'Get out of my club!' I want to be there with the real gritty people."

“Sprint, don't run, because that immediately sparks your metabolism and stuns your body by engaging your muscle groups in a very explosive way,” Christensen continued about her approach to fitness. “I can't run for 40 minutes at the same pace, listening to music. I will do 20 minutes and then I'm dying. I don't do the long, methodical routines of swimming 40 laps either. I want to be in the ocean fighting waves, not being in the pool staring at the clock and only seven minutes have passed when I'm already exhausted."

And finally, Christensen insisted she savors her favorite dishes — but in moderation.

"I love food more than anything… more than my family and friends and almost as much as my dog!” said Christensen I could eat pasta every night, with tons of parmesan or a few white truffles thrown in (for a hundred dollars more!). I also love Japanese food and I always think I'm eating so clean… before I order a hundred different options! I adore my mother's Peruvian food, which I grew up with, too, and of course, Danish cuisine. I always look forward to going home so I can bite into a real Danish; anything else is just pretending."