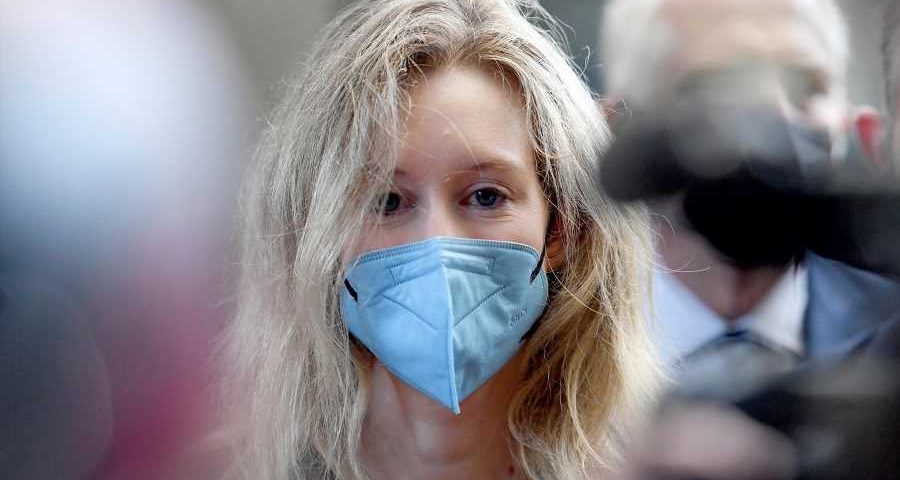 This week, the trial of Elizabeth Holmes, founder of the blood-testing company Theranos, begins in San Jose, California. She faces federal charges of fraud and conspiracy and a potential 20-year prison sentence for allegedly misleading patients, doctors, and investors about her company’s technology, which was supposed to be able to identify a variety of medical conditions with a finger prick. A 2015 Wall Street Journal investigation by John Carreyrou revealed the technology was unreliable, however, and the company was performing the vast majority of their tests on traditional lab equipment.

Court filings from late last year suggested Holmes was mounting a mental health defense and showed she had enlisted a domestic violence expert as a witness. Last week, unsealed court documents revealed more specifics: Holmes planned to defend herself by arguing that her ex-boyfriend, Ramesh “Sunny” Balwani, also a former executive at the company, abused her emotionally and sexually, which impaired her state of mind at the time of the alleged crimes. In particular, court filings describe a “pattern of abuse and coercive control” that continued over the course of their approximately 10-year relationship.

Lawyers for Balwani, who faces a separate fraud trial scheduled for 2022, filed a motion calling the accusations “outrageous,” and saying, “Ms. Holmes’ allegations are deeply offensive to Mr. Balwani, devastating personally to him and highly and unfairly prejudicial to his defense of this case.”

In general, coercive control describes a pattern of behaviors where an abuser uses incremental isolation, deprivation, denigration, humiliation, financial restrictions, and threats, among other strategies to gain power over their partner. It’s a relatively new term, coined around 2007, for an established pattern of abuse that relies more on intimidation and isolation than on physical violence, although occasional violence and the looming threat of more are often present. “Coercive control is more insidious than what lay people may think of as domestic violence, because it’s psychological primarily,” says Linda Seabrook, a former prosecutor of domestic violence cases with 26 years of experience in domestic violence advocacy. “The threat of violence is always an undercurrent, but it’s rarely actually used.”

Holmes will attempt to show that Balwani was the criminal mastermind behind Theranos’ deceptive practices, while she was the unwitting victim of his controlling and abusive behaviors and that her emotional duress affected her mental state, causing her to participate in the crimes she’s accused of committing. “I always start with the premise that I believe survivors, but the prosecution will have to delve into whether Holmes is, in fact, a survivor,” Seabrook says.

The claim of abuse is a rare defense in white-collar cases like this and used much more commonly in domestic violence and sex trafficking cases, according to Chitra Raghavan, a forensic psychologist at John Jay College of Criminal Justice. “There is little widespread knowledge of how coercive control is often used to force another party to commit crimes, except really in sex trafficking where it is well understood,” she says.

Given her status in Silicon Valley and her alleged history of manipulating investors in her business, Holmes may struggle to convince a jury she is a survivor of a relationship with elements of coercive control that caused her to participate in fraudulent business practices. At the same time, the case highlights a facet of domestic violence that is less high-profile than physical and sexual violence, but no less harmful when it comes to gaining control over a victim’s life. “I’m a real believer that each case is comprised of particular individuals, and particular circumstances involved,” Seabrook says. “Just like Elizabeth Holmes doesn’t represent all female CEOs, she also doesn’t represent all victims of coercive control.”

Ultimately it will come down to the jury’s impression of who held the power in the relationship.

Coercive control has been in the news lately due to a push by some advocates to change how lawmakers understand the behavior, both as a precursor to more serious violence and in some cases criminally abusive on its own. In 2020, California and Hawaii both passed laws to combat coercive control, and New York and Connecticut have introduced similar legislation. A few high-profile figures, including Congresswoman Cori Bush and FKA Twigs have spoken publicly about surviving coercive control relationships.

Holmes’ case puts the term in headlines once again. One filing by her defense team argues that her presenting as a successful businesswoman does not mean she couldn’t have been abused. Seabrook agrees. “Domestic violence and coercive control can happen to anyone in any socioeconomic status, any position,” she says.

Coercive control can be a particularly tough type of abuse to recognize. A victim may not show physical evidence of injuries, and many of the behaviors can appear benign, even as they contribute to a larger, creeping method of exercising power over a victim. “If you tell someone ‘He’s sending me flowers at work,’ they’re [like], ‘Oh, what a romantic,’” Seabrook says. “But if you’re trying to get away from someone doing things like that, knowing that he has access to you — knows where you work, knows where you live, knows where you are at a particular time — can be quite frightening and intimidating.”

Holmes’ lawyers plan to argue that Balwani controlled what Holmes ate, how much she could sleep, how she dressed, her spending, and that he monitored her calls, texts, and emails. She’s spoken in the past about eating a vegan diet because it gave her energy to work on little sleep, and about choosing a wardrobe of all black clothes to avoid putting unnecessary energy into getting dressed in the morning.

Seabrook predicts the defense will also point to the 19-year age difference between Holmes and Balwani as evidence that he was able to gain power over her, along with the fact that Holmes was just 18 when they met. But other elements of Holmes’ life and career may work against the argument. “Some other things that you can look at is, was she isolated from her family or did she continue to have significant and close ties with her family?” Seabrook says. “Did she lack power or was she the CEO of Theranos, on the cover of Fortune?”

Although a high-status person can be abused, Holmes’ literal outranking of Balwani at Theranos is tough to square with coercive control behaviors. Raghavan points to the 2018 allegations that former New York Attorney General Eric Schneiderman had hit women and been violent during sex as a textbook example of coercive control, in large part because of his professional position. “The important thing here is most of it was through an imbalance of power, his position as attorney general,” she says. “The fact that everybody thought he was amazing, [compared to] the intense humiliation these women felt.” Meanwhile, Holmes was founder and CEO of her company while Balwani served as president and COO — under her. “If you don’t have as much power as the survivor and you’re the abuser, it’s more challenging to achieve that control,” Seabrook says.

Other factors working against Holmes’ case include the fact, according to Carreyrou’s book Bad Blood, she’d netted a significant venture capital funding — based on a misleading presentation about the Edison machine’s accuracy — by 2006, two years after she’d founded Theranos and three years before Sunny joined as its president and COO. Additionally, Balwani left the company in 2016, as regulatory agencies began investigating Theranos’ practices. The company released a statement that he’d retired, but company sources told Carreyrou he’d been fired — by Holmes.

Seabrook expresses concern that this defense tactic could be an attempt to save Holmes at the expense of Balwani. “Not knowing the particular evidence that she has to support her defense, I do think we should think about the history we have in this country of white women falsely accusing men of color to escape culpability for their conduct,” she says. “I’m not saying that’s what is going on here. I’m just saying it’s a consideration.” Ultimately it will come down to the jury’s impression of who held the power in the relationship.

A high-profile case like Holmes’ has the opportunity to inform more people about coercive control, according to Raghavan. “At a victim level, it might bring recognition to other men and women who are in situations where they feel they haven’t been able to name what’s going on,” she says. “Awareness brings power.” At the same time, she acknowledges it’s important to not apply the term beyond its true definition. “We need to be careful that we don’t call everything coercive power, and that when it’s called coercive control, it really is,” she says. “It’s just as dangerous to throw the net too wide as to not throw it at all.”