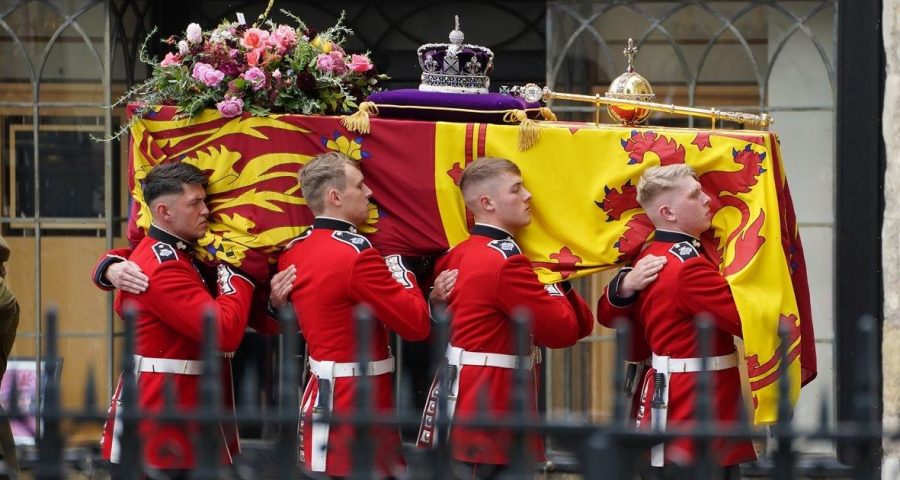 Her Majesty the Queen’s pallbearers have been praised for their service to the late monarch after carrying her 500lb coffin from Westminster Hall to St George’s Chapel – but there was more to their duty than carrying her coffin.

The coffin bearers, some of whom flew over from Iraq for the Queen’s historic state funeral, were also tasked with something that wasn’t shown on cameras after the 96 year old’s monarch was lowered into the vault.

Once Her Majesty was there, her pallbearers had to move the monarch’s body to be next to her late husband Prince Philip for her final resting place.

General The Lord Dannatt, the UK's former Chief of the General Staff wrote for The Telegraph: “These young guardsmen deserve particular praise.

“Even when the cameras are switched off at the end of the day and the final private service of committal is being held at St George’s Chapel, Windsor, their duty will not be over.

“Deep in the Royal Vault under the chapel, the pallbearers will have one final unseen duty — to move the late Queen’s body to its final resting place close to her husband, The Duke of Edinburgh, and to her father, King George VI.”

In the wake of their dutiful and “flawless” service yesterday, people have praised the pallbearers, with Piers Morgan leading the comments.

“These magnificent 1st Battalion Grenadier Guard pallbearers have been done their Queen and country proud,” he wrote. “Incredible job under hugely stressful conditions.”

“Just 10 days ago, the pallbearers carrying the Queen's coffin were in Iraq. I know everyone is saying it but they are doing an impeccable job – as are all the servicemen and women making today's service so faultless and beautiful,” wrote someone else.

A third added: “The unsung heroes of today. What an incredible job these 8 young soldiers did. Serving their Queen right up until the end. You should be so proud”.

It’s believed the Queen had a strong bond with the chosen soldiers who carried her coffin as former British Army soldier Major Adrian Weale told PA News Agency: "They became the Queen's Company immediately after the death of George VI and the Queen has been commander ever since.

"It's their role to protect her body, both in life and in death, remaining the Queen's Company until King Charles decides otherwise.

"Their duties will then be transitioned to the next monarch."