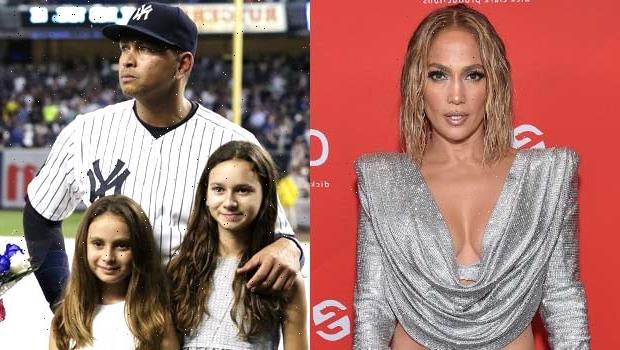 A breakup didn’t stop Jennifer Lopez from wishing her ex-fiancé’s daughter a happy birthday. Alex Rodriguez‘s daughter, Ella, turned 13 years old on April 21, and J.Lo made sure to celebrate the special occasion with a shout-out on her Instagram Story. The singer and actress shared a black-and-white photo of her and Ella and wrote over it, “Happy birthday Ella Bella.” You can see the picture in this video slideshow, here.

Jennifer Lopez with Alex Rodriguez’s daughters and her own daughter, Emme. [Instagram/@arod]

This was the very same photo that A-Rod included in his own birthday tribute for Ella. Like J.Lo, A-Rod didn’t let their ended engagement stop him from celebrating Ella’s big day with a memory that the teenager had with his ex-fiancée. While J.Lo made it into A-Rod’s video tribute, his focus was solely on Ella in the caption.

“13. Wow…That number has meant a lot to me over the years, but today, it’s even more special than ever…I just can’t believe my Ella Bella turns 13 today. My baby girl is officially a teenager!!…Ella – everyday you amaze me more than I could have ever imagined. You are smart, mature, talented, caring, and funny. I am so proud of the young woman you are becoming and so lucky and grateful to be your dad. I love you so much,” the retired MLB star gushed under the visual birthday montage.

J.Lo and A-Rod had announced their split just six days before Ella’s birthday. “We have realized we are better as friends and look forward to remaining so. We will continue to work together and support each other on our shared businesses and projects. We wish the best for each other and one another’s children. Out of respect for them, the only other comment we have is to say thank you to everyone who has sent kind words and support,” the couple wrote in a joint statement that was issued to the Today Show on April 15.

Jennifer Lopez and Alex Rodriguez with each other’s kids. [Instagram/@arod]

J.Lo had allegedly “insisted” on the breakup because there were “too many issues that are unresolved,” a source later claimed in a PEOPLE report, which came forward on April 21. The insider added, “But whether or not [A-Rod] has cheated doesn’t matter. She won’t tolerate the fear of it in the air between them… She has been pretty miserable and didn’t think it was in her best interests to stay with Alex.”

No matter what reports are saying, it’s no surprise to see J.Lo still sending her love to her ex’s children. After J.Lo and A-Rod began dating in 2017, their children eventually became very close; J-Lo shares her 13-year-old twins Maximilian “Max” David and Emme Maribel with ex-husband Marc Anthony, while A-Rod shares his daughters Ella and Natasha, 16, with ex-wife Cynthia Scurtis. After J.Lo and A-Rod declared they were “working through some things” in March, a source EXCLUSIVELY told HollywoodLife, “Alex and Jennifer feel like they have a family right now. They may stay together a little bit for the sake of the kids, but that’s why they’re together right now.”