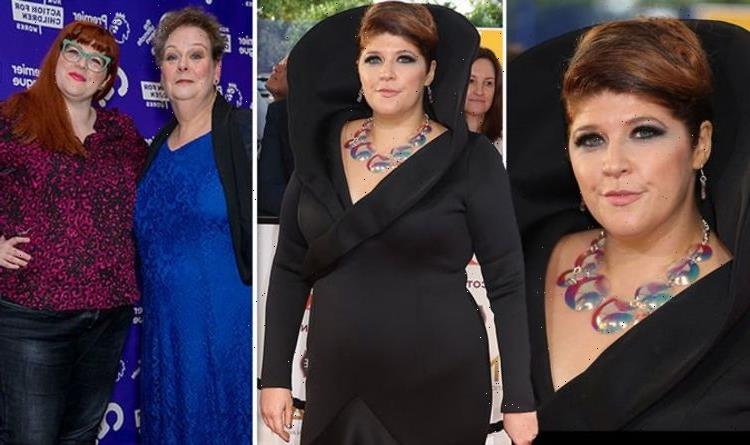 Jenny Ryan turned heads wearing a dramatic black gown which featured an oversized collar and a mermaid-style skirt at the National Television Awards last night. The Chase star added a bold statement necklace and silver earrings to her look and also stood out with dark eye make-up and pink lipstick.

Jenny’s choice of outfit was mentioned within an article highlighting the 15 memorable moments from the evening.

Huffington Post shared a picture of the quizmaster’s outfit with the caption: “Extremely camp.”

Sharing the article on her page, she wrote: “The dress gets its own entry. Rightly so.”

While many praised her style, one commented: “Sorry Jennie Ridiculous Dress.”(sic)

“And my name,” Jenny cheekily chimed in.

The Chase star also shared a picture of herself posing with a fan on the red carpet.

She penned: “About last night… My epic #NTAs look was created by the amazing @designerbenmak who is a genius.

“Aided and abetted by Ryan Steedman on hair @ryansteed and Alice Bond on face. Necklace and earrings from @tattydevine.”

One of her fans commented: “You looked absolutely amazing. When I first saw your pic, I thought you had had your hair cut quite short – loved it, really suited you.”

A second added: “If there was an award for best outfit it would have gone to the Vixen! X.”

A third penned: “This is such a fantastic look. Absolutely love everything about it. Hope you had a brilliant time!”

Taking to Twitter, he wrote: “Shame to miss the NTAs last night but glad @jenlion made great use of my outfit.”

Despite missing out on the award for Best Daytime Show, they scooped the gong for Best Quiz Show with Beat The Chasers.

Bradley Walsh was also up for the Best Presenter gong, but this was won by Ant and Dec for the 20th time.

Mark Labbett, who skipped the event, wrote on Twitter: “We are outsiders for the best daytime show but there is always hope.

“When is Bradley finally going to get his own NTA? #NTAwards.”

Beat The Chasers continues tomorrow at 8.30pm on ITV.