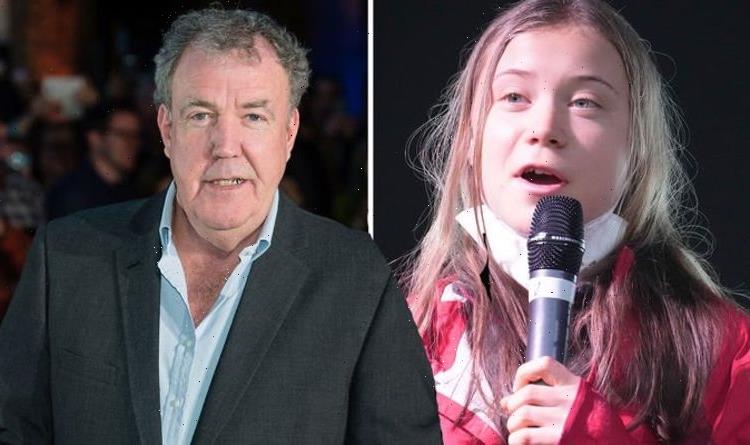 Greta Thunberg leads a singalong with protesters in Glasgow

Jeremy Clarkson is no stranger to sharing his controversial views about Greta Thunberg and recently said the 18-year-old deserved a “smacked bottom” for protesting rather than being in school. The 61-year-old also branded her an “annoying little bucket of ego”.

His comments certainly caused a stir with many taking to Twitter to slam his opinion.

Most recently, The Grand Tour star hit back at a claim he was “afraid” of Greta.

Sydney BD commented: “@JeremyClarkson You afraid of a little girl? What a LOSER!”

“Afraid? No. That’s not the right word at all,” Jeremy replied.

Earlier this month, the presenter wrote in his column with The Sunday Times: “I simply don’t get the Thunberg phenomenon.

“She has no knowledge of how the world works, no manners and no letters after her name because instead of going to school, she’s been busy sailing round the world so she can be mardy and abusive to grown-ups.

“What she needs is a smacked bottom.”

Despite backlash, Jeremy said he stood by his comments.

He went on to claim that Greta will have “packed it in” in a few decades time and will “turn the central heating up”.

The ex Top Gear star initially made his remarks during the COP26 summit in Glasgow.

Greta addressed the crowd in George Square and was a part of a march through the city on November 5.

She claimed the summit was a “failure” and a “PR exercise”.

The activist also criticised leaders’ goals for cutting emissions which cause global warming.

“We, above all, need them for 2020 and every following month and year to come.”

She went on to say the agreement determined at COP26 was “very vague”.

At the summit, over 100 countries agreed to slash methane emissions and signed a plan to end deforestation.

As well as this, 190 countries agreed to phase out coal power and end public funding.

Prime Minister Boris Johnson said the world was “undeniably heading in the right direction” but acknowledged the event didn’t deliver the “full solution”.