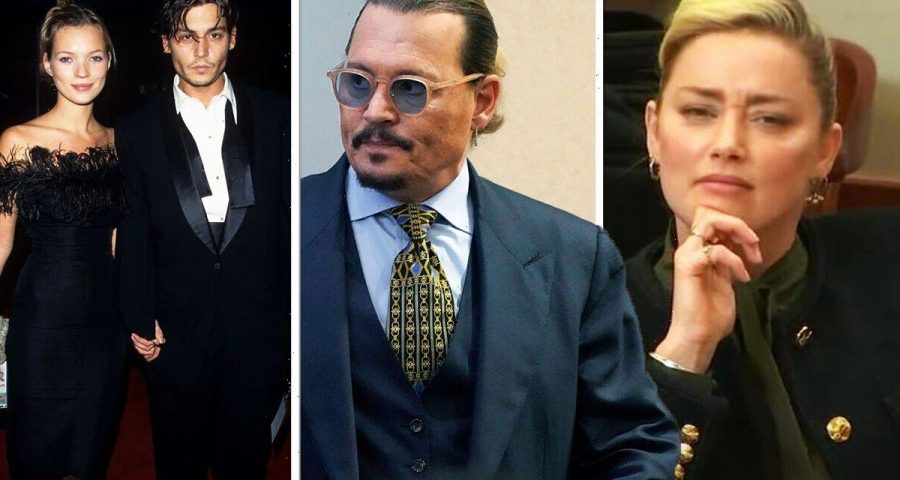 Johnny Depp has addressed the rumour that he pushed his ex-girlfriend Kate Moss down stairs for the first time today during the $100 defamation suit with his ex-wife, Amber Heard. It comes as the Hollywood actor, 58, was called to testify once again, following the testimony of his ex-girlfriend, British supermodel, Kate Moss just hours before.

Ms Heard took the story and turned it into a very ugly incident, all in her mind

Returning to the stand following Moss’ testimony, Depp addressed the rumour for the first time.

He confirmed he had relayed the incident of his ex-girlfriend Moss falling down stairs to his ex-wife.

However, addressing the rumour that he had pushed her down the stairs, Depp told the court: “Ms Heard took the story and turned it into a very ugly incident, all in her mind.

“There was never a moment where I pushed Kate down any set of stairs, yet she’s spewed this three times before.”

He went on to tell the Virginia court room of the event in question on his and Moss’ holiday in Jamaica.

Depp said: “I had left our bungalow about three minutes prior to her, I was standing outside and suddenly rain starts coming down like it’s, you know, a monsoon.

“And then I remember looking and seeing Kate coming out the door and there were three little wooden stairs.

“And she slipped, her legs went up and she landed directly on her coccyx on her lower back,” he explained.

Depp continued: “And she was obviously physically in pain and she was crying so I ran over and grabbed her to make sure she was alright

“That’s it, that’s all I ever, that’s the whole story.

“But then the rumour of it, I’d never heard a rumour of that before Miss Heard grabbed hold of it like that, sorry,” he said.

Heard opened the door to Moss’ testimony by claiming she feared Depp would push her sister down the stairs during a violent argument.

According to Heard, there was a rumour that Depp had once done the same thing to Moss and it came to her mind.

Moss was appearing as a witness for Depp during a stage of the trial known as rebuttal, where he gets to challenge Heard’s allegations.

Questioned by Depp’s attorney Benjamin Chew, Moss said: “No, he never pushed me, kicked me or threw me down any stairs.

“He carried me to my room and got me medical attention.”

The supermodel was originally brought up in Depp’s 2020 defamation trial in London by Heard, who claimed that she had heard that the model was pushed downstairs by the actor.

Moss and Depp were reportedly introduced at New York hangout Café Tabac by columnist George Wayne; she was 20, he was 31 and they dated for four years until 1998.

They were pictured together at high-profile events including the Golden Globe Awards in 1995, the Cannes Film Festival in 1997, and premieres for the actor’s films including Donnie Brasco and Don Juan DeMarco.