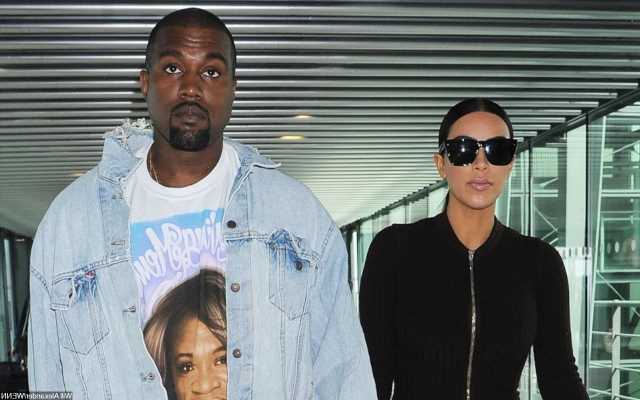 Amid rumors that he may reconcile with his estranged wife, the ‘N***as in Paris’ hitmaker is seen wearing a plain black hoodie with big and bold letters of ‘KW’ written on it.

AceShowbiz –Kanye West has continued to make his fans wonder whether or not he’s reconciled with his estranged wife Kim Kardashian. In a recent sighting, the “Donda” artist was spotted wearing the “Keeping Up with the Kardashians” alum’s initials.

In photos obtained by Page Six on Wednesday, September 1, the 44-year-old rapper was seen visiting several art galleries and museums in the German capital. For the outing, the “N***as in Paris” hitmaker could be seen wearing a plain black hoodie and emerging in one that read “KW” in big, bold letters. His face was also fully covered by a mask.

Amid reconciliation rumors between the exes, the SKIMS founder was reportedly “considering” options to get back with Kanye. Recently, a source spilled to Entertainment Tonight that “Kim and Kanye have a deep love for each other and many amazing memories and it’s difficult to just let that all go.”

Offering more details, the insider went on saying that “Kim’s main focus and concern are her children and doing what is best for them and their family.” According to the source, that means the reality star is “considering her options” with Kanye, but keeping her kids top of mind. “She is open to seeing where things go with Kanye and to see if they can work through their issues as a couple,” the informant added.

On Kanye’s part, the source told the publication that “Kanye wants to get back with Kim and he has been trying to win her over again and reprove himself.” The insider went on to note that “Kim and Kanye plan to co-parent in a healthy way and will always maintain a supportive relationship” regardless of what will happen.