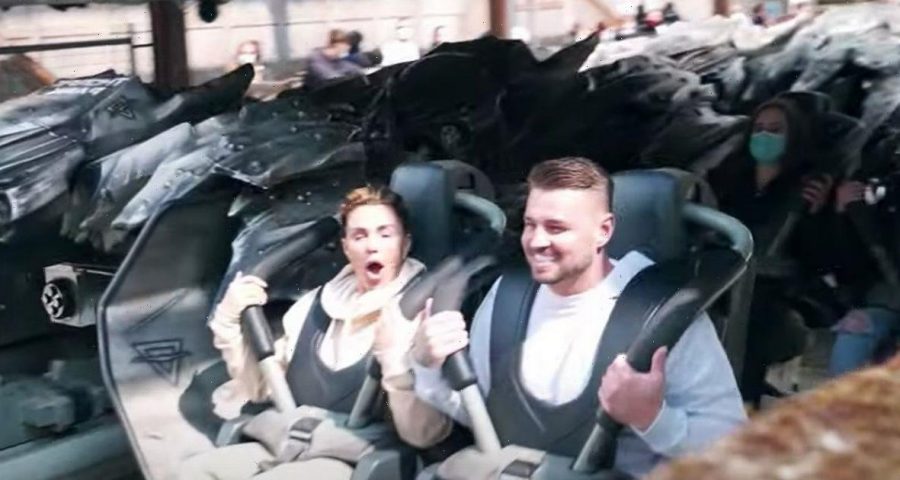 Katie Price and fiancé Carl Woods got stuck on a ride during a fun day out at Thorpe Park.

The newly engaged couple were looking forward to their first date after Carl popped the question but frolics turned to fright when the Swarm ride they boarded was evacuated by security.

Katie documented their theme park trip on YouTube channel, saying: “The last time I came to a theme park it was Alton Towers and I couldn't walk. But now I'm going on here to have the ride of my life.”

She was then told by security to leave the ride, and her YouTube channel flashed the message: "Due to guest action, Swarm seized operation as they were in a danger zone."

The TV star saw the bright side of the situation, saying: “It's good they have to restart the ride. Thorpe Park is safe."

The loved-up couple finally got to go on Swarm and after leaving the ride Katie was accosted by a ride host who called her an “icon”.

Katie was one of many famous faces at the VIP launch of Thorpe Park's epic Black Mirror Labyrinth, including James Argent, Dan Osborne and AJ and Curtis Pritchard.

Other highlights of Katie’s date night included a dance in the foyer and a snack of donuts on their way out of the park.

Katie joked that her feet felt like they were “on fire” as she exited the park with her bag of donuts.

Katie had a lot to celebrate, as Carl romantically proposed to her last month, marking her eighth engagement.

Carl told OK! about his romantic proposal : “I had the whole house kitted out with balloons and flowers, and a big sign inside that said 'Mrs Woods’”.

He continued: "So I was assuming she was going to say yes! Then there was a marquee in the garden with lots of flowers and candles. I had a sign saying, "Dolly, will you marry me?"

Katie reacted saying she was “shocked” and that the ring (which was estimated to cost £250,000) “nearly blinded” her.