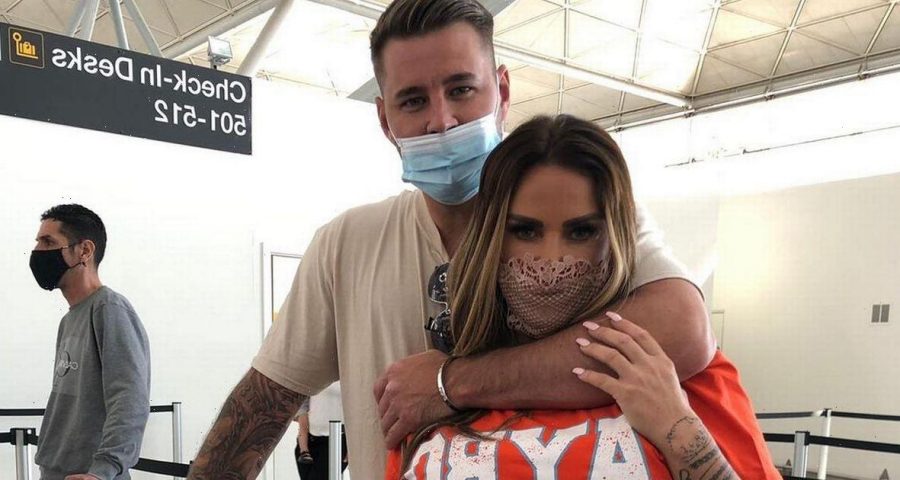 Katie Price and Carl Woods have revealed they've jetted off to Turkey, despite the country being on the UK's red list.

All non-essential travel to Turkey is currently banned and those returning to the UK from there will have to stay in a mandatory quarantine hotel, which is said to cost £1,750 per person.

Clearly unfazed by the restrictions, Katie took to her Instagram feed to share a snap of herself posing in a red Playboy T-shirt with matching cycling shorts as she stood next to Carl, 32.

The 42 year old, who recently joked she can now wash her wigs as she got a glamorous hair makeover, donned a snake-print face mask and had a full face of make up on, including black eyeliner and fake lashes.

The TV personality accessorised with her stunning engagement ring and held onto the handle of a Louis Vuitton suitcase.

Carl wrapped an arm around his other half as he appeared to smile for the camera. The reality star wore an off-white T-shirt with black shorts and white socks. He carried a pair of sunglasses, which were tucked into his shirt, and kept a blue face mask on.

In the caption, Katie, whose son Junior exclusively told OK! that he doesn't want more siblings, wrote: "Me and @carljwoods on our travels watch our @adventuresofkatieandcarl," with a red heart emoji.

Carl also took to his own social media page to share several snaps from their travels as one of them saw the pair sitting down at Coast to Coast restaurant at Stansted Airport.

"We don’t know when we’ll be back again @katieprice," he wrote with a shocked face emoji and an airplane emoji.

One fan was quick to ask: "Where you off to now mate," to which he responded: "Turkey mate; see you when I’ve got a six pack," followed by a crying with laughter emoji.

He also took to his stories to share a photo of himself looking serious, over which he penned: "Travels and s**t….."

Carl then shared a short clip of himself posing with Katie as she said: "We're off!" and later posted a video of the plane wing after touching down.

According to MirrorOnline, Katie is in Turkey to undergo a full-body liposuction surgery as well as a brow and facelift. The publication claimed she's also due to have more work done on her veneers.

OK! has approached Katie and Carl's representative for further comment.

Katie previously spoke out about her plans to have weight-loss surgery ahead of starting her IVF journey to have kids with Carl.

“I have tried so much to lose weight. I do want a baby and obviously we’re doing IVF so we’re doing the protocols with that," she said on Steph's Packed Lunch.

She continued: “But I just want to shift some weight before I do it so I am going to have surgery.”