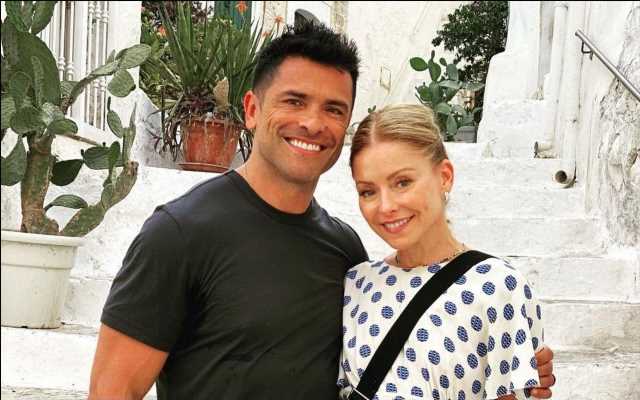 The ‘Live with Kelly and Ryan’ host reveals she once passed out while having sex with hubby Mark Consuelos and woke up to find herself in the emergency room.

AceShowbiz –Kelly Ripa fainted while having sex with her husband. Married to “All My Children” co-star Mark Consuelos since 1996 and having Michael, 25, Lola, 21, and 19-year-old Joaquin with him, the 51-year-old actress explained that she had woken up in the emergency room early on in her marriage during the throes of passion because of large cysts on her ovaries.

“My eyes shift between the fuzzy images on the screen, the remnants of my ovarian tormentor, and Mark happily snacking away. Sex can be so traumatic I think, and yet one of us is completely undaunted,” she said.

The “Live with Kelly and Ryan” host went on to joke that, while her husband had appeared at her bedside looking “well dressed,” she herself had dressed like a “dime store prostitute” as she thought she was having a nightmare.

In an excerpt from her upcoming autobiography “Live Wire“, she writes, “Also, here is my husband, who is, dare I say, stylish, well-dressed at all times, and yet he dressed me like a dime store prostitute in my time of need. It’s still baffling to me to this day that this is the best costume for the day that he could find for me, to the point where, when I was on the stretcher, I thought I was dreaming; I was having a nightmare. I didn’t realize I had come to!”

Meanwhile, Kelly explained that she is always more “impressed” by everyone else and, because she is “not used” to being around fellow celebrities, she is the person that “doesn’t belong” in the room.

She said, “I was clearly the person that didn’t belong in that room, because you know that Mark was like, ‘You’re not bringing an autograph book to a party’ and I was like, ‘What if someone amazing is there?’ I’m not used to being around celebrities in the wild. In fact, I’m so unused to it that in my mind, I cast myself as Richard Gere‘s co-star.”

“To this day, I still revere Richard Gere. I don’t know that I would ever have the comfort level to approach him again; it was such a big moment in my mind. And that he couldn’t recall that I was even there tells you everything you need to know about my life. I’m always more impressed than everybody else.”

“Live Wire” is set for release on 27 September.