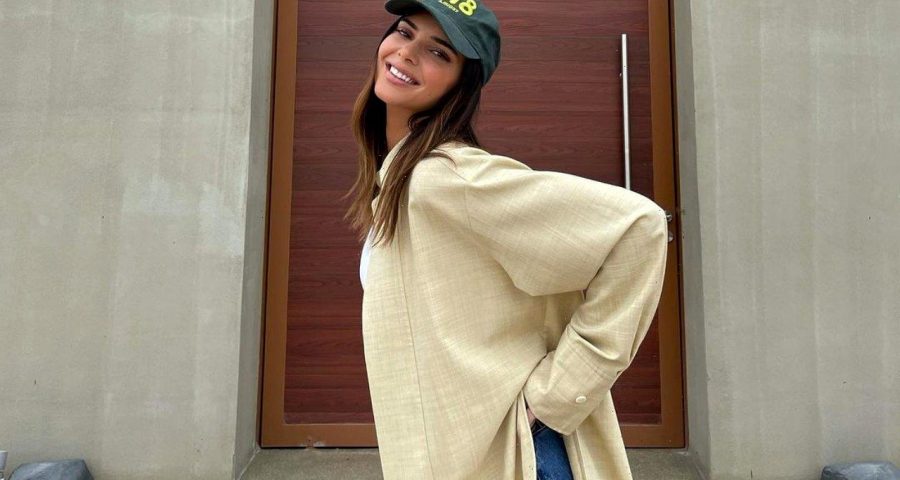 While her boyfriend Devin Booker is in awe of the model’s pics, some social media users are unimpressed by her half-hearted and ‘bland’ transformation into the popular animated character.

AceShowbiz –Kendall Jenner may be one of top models nowadays, but not everyone seems to agree with that. The raven beauty has been roasted by Internet users after she unveiled her Corpse Bride costume for Halloween.

Several days earlier before the annual festivity, the 25-year-old star let out some pictures of her dressing as the popular character in Tim Burton’s 2005 animated movie. She put a sexy spin to Helena Bonham Carter‘s character in the film by wearing a white thong and bra with a long, lacy veil, sheer gloves and retro Giuseppe Zanotti heels.

Kendall struck different poses and had the images edited to make her body parts disproportional. One photo featured her legs looking unnaturally extra long as her face and legs were blue. Another image saw her fingers stretched. She captioned the snaps with, “Yer corpse bride.”

Her photos left her boyfriend Devin Booker in awe as he commented, “don’t forget!” Her sister Kylie Jenner also loved it, writing in the comment section to let the former Victoria’s Secret model what she was “obsessed” over her look.

Some social media users, however, were not impressed with Kendall’s seemingly half-hearted and “bland” transformation. “how you get ate by claymation,” one person reacted to Kendall’s “Corpse Bride” photo shoot.

“homegirl put on some lingerie and called it a night,” another described Kendall’s look in the shots. A third ripped the reality TV star, “Yes girl give us NOTHING.” One person enthused, “I mean, it’s giving dead. So at least she got that part right.”

“Perfect case study of white privilege. Constantly gives nothing and people eat it up,” a fourth remarked. Another claimed, “She’s just a ‘bride’. And colored herself blue through PicsArt.” Another critic noted, “The bare minimum doing the bare minimum. What are we actually seeing here? Are we suppose to gag?”

“Lingerie veil and vibes. One of the highest paid models in the world serving us nothing since day one I’m confused,” someone blasted Kendall. Another described Kendall’s costume as “Awkard. Dry. Boring. Lethargic. Uninteresting. Emaciated. Bland. Listless.”