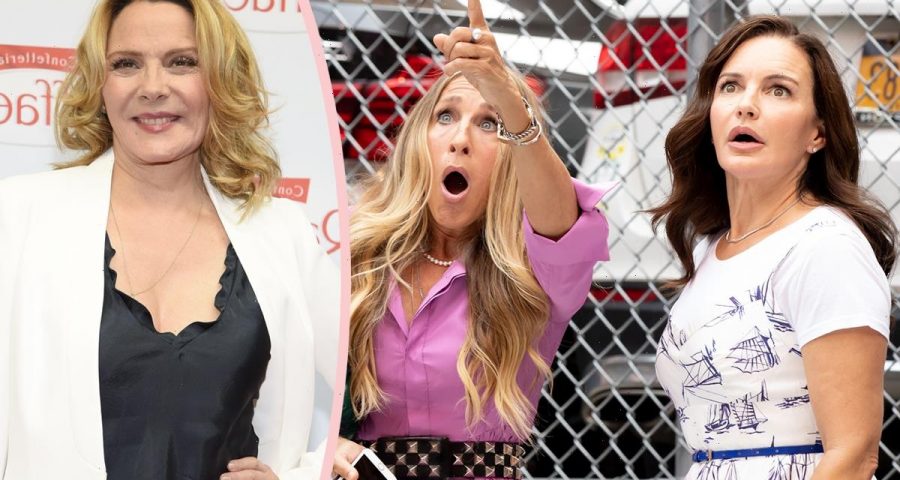 And Just Like That… they got our full attention!

The Sex And The City reboot obviously has fans excited, but if we’re being honest there’s a big Samantha-shaped hole in all our hearts about it. The absence of Kim Cattrall could be just too much to bear… but it doesn’t necessarily have to be permanent?!

That’s right, according to a senior production source spilling to DailyMail.com, there’s another chance for Samantha to return — despite the revival being a limited series.

OK, first off, we don’t know for sure if this is the same source who gave DM as scoop a few weeks back about the returning cast, but they were right on the money that time. With that in consideration…

The insider claims that although this was originally planned to be just a one-off ten episode run, it’s going really well — and exceeding everyone’s expectations! Sarah Jessica Parker and executive producer Michael Patrick King are SO HAPPY, they’re now planning for this to continue!

“Michael and SJP have plans for this to be more than a limited ten episode run on HBO Max, so expect to see a second season announced soon.”

Wow! That’s fantastic news for fans, who haven’t had any SATC content since the (largely disliked) sequel film in 2010.

Only, there is still the elephant NOT in the room, the absence of one of the fab foursome. Well, that apparently is not as much of a problem as everyone behind the scenes was worried about! The source says:

“There was obviously a concern that people would miss Kim and not be engaged but the response so far has been phenomenal.”

But that doesn’t mean the producers are saying GOOD RIDDANCE — they’d still happily welcome back the Filthy Rich star whenever she wants to take her rightful place:

“And for fans of Kim, the door is open for her to return. If she ever changes her mind, she can come back.”

Yay! Then they’ll be able to call the corners! Wait, that’s another franchise…

The insider even claimed there’s no bad blood on behalf of Kim’s co-stars Kristin Davis, Cynthia Nixon, and yes, even SJP:

“The ladies love and value her and would love to see her on the new show. The whole point of this series is to show that friendships evolve and change over time, so Kim is always welcome to come home.”

Awww! The source even went so far as to make a sort of unofficial offer, declaring:

“If Kim’s reps called us now and said she was available — we’d book her on the first flight to New York. There’s still time.”

After all, Carrie herself would have to sign off on that decision, and the Emmy winners have spent the last few years in one of the ugliest co-star feuds we’ve ever seen.

Will Kim accept an olive branch from her nemesis and reprise her role? It would mean a pretty big about-face — but fans can dream…

Meanwhile, filming continues. And so do paparazzi and fan pics of the sets! The source admits:

“The response on the streets of Manhattan has been unbelievable — yet a little bit challenging… Every time we film with the cast, screaming fans show up and whip out their cell phones and record. It makes it very difficult to keep the storyline and guest stars under wraps.”

But according to the source, it’s just something they’ll have to live with — because it isn’t worth it to run away:

“This isn’t a show that can be done on a closed set. New York City is a central character so it has to be featured… The production really is a tribute to New York when the city needs it most, with the goal to bring positivity and life back to the Big Apple. This is something that everyone, especially SJP and Cynthia, are passionate about so they want as much location filming as possible.”

And if it “means anyone can stop by and see the show being filmed,” so be it. The good news? It’s proof how much people care about the show!