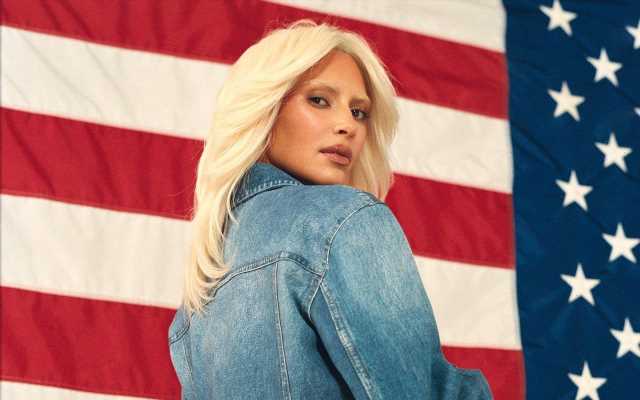 The 41-year-old cosmetics mogul and reality TV star breaks the Internet once again with the racy cover, which features her showing off her bare butt as she rocks blonde hair.

AceShowbiz –Kim Kardashian is almost unrecognizable in the cover of the September issue of Interview magazine. The 41-year-old cosmetics mogul and reality TV star broke the Internet once again with the racy cover, which featured her showing off her bare butt as she rocked blonde hair.

“The Kardashians” star donned a denim jacket by Bottega Veneta for the “American Dream” issue. The SKIMS founder, who also bleached her brows, paired it with blue jeans by the same fashion house while a white jockstrap wrapped around her bare butt. Adding sensuality to the photo, her pants were slid down as it allowed her to showcase her famous derriere.

Of wearing the jockstrap, Kim revealed in the interview with editor-in-chief Mel Ottenberg, “Oh my god. I loved it.” She continued, “The team was like, ‘No jockstrap.’ And I’m like, ‘Come on. This is what I do.’ I do best when I’m ignoring them and doing what I want. So, I’m glad we did it.” She also heaped praises on photographer Nadia Lee Cohen as saying, “Working with Nadia Lee – we just vibe so well when we shoot together. She’s the first photographer that I’ve really gone full force with.”

About her hair, which was styled by Chris Appleton for the photo shoot, Kim noted, “I am keeping it for a little bit. I feel like in the fall I’ll go dark, just because I don’t want to damage my hair. But, I do think blondes have more fun. I just feel different.”

However, some others were not impressed. “Eyebrows are awful!!! What bad makeup!” someone commented. Another user wrote, “Let’s just bleach this whole thing and pretend it didn’t happen,” while a person simply called the photo shoot “horrendous.”