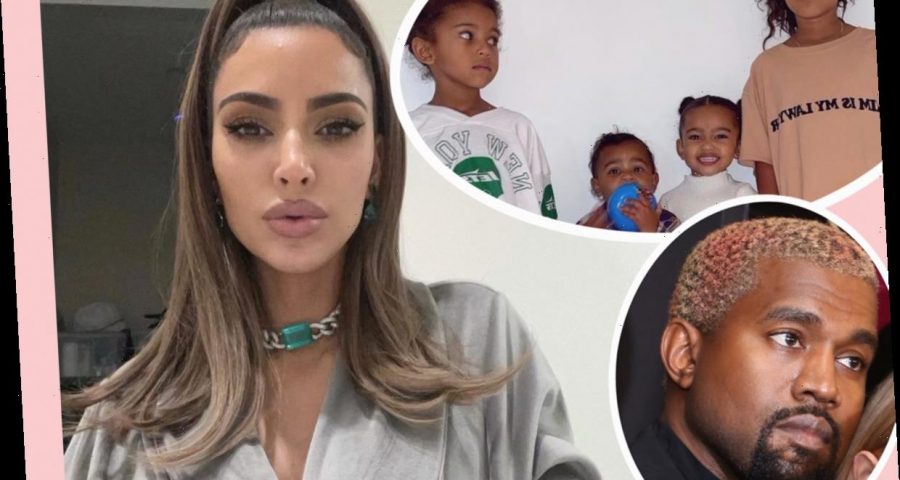 We know one of the wedges driven between Kim Kardashian and Kanye West was worldview, especially as it affected how to raise their four children.

But have Kanye’s evolving (or devolving if we’re being honest) positions pushed Kim to keep him away from the kids altogether??

When the news of the divorce first broke we heard the former power couple were both on board with joint legal and physical custody of North (7), Saint (5), Chicago (3), and Psalm (21 months). But what does that shared custody arrangement look like?

A source speaking to People on Thursday said visits are already taking place:

“Kanye has been spending time with all the kids. A nanny is around during the visits. Kim has not been around for the visits, at Kanye’s request.”

“At Kanye’s request.” Huh. Not sounding quite so amicable now if he can’t stand for her to be around while parenting, right?

But a source close to the KUWTK star wanted to stop rumors of her making co-parenting difficult before they even got started. The insider affirmed:

“Kim has made it clear that Kanye can talk to his children anytime he wants. She has never threatened to keep him from the kids.”

Whoa… did someone ask that? Even more alarming, the source said:

“She only requires that he is not going to damage them.”

Um, what?? Sorry — she “requires that he is not going to damage them”?? Is that what she told him?

According to this source, that’s NOT what she’s communicating… to him at least. The source says Kim (and everyone else around him) have been encouraging Yeezy to see the kids more, not less:

That’s great, but… back to how Kim “requires that he is not going to damage” their kids. That didn’t come out of nowhere.

We knew they had serious differences — not just his embrace of nonsensical conspiracy theories but also his pivot to conservative, fundamentalist, i.e. SEXIST gender politics (remember when he BANNED North from wearing makeup??) But is she worried he will say things to the children that actually harm them? That he will try to convince them, for example, that “slavery was a choice”?

Obviously the irreconcilable difference that led to divorce are going to lead to a certain amount of disagreements in parenting. A source told People earlier this week:

“They have a different vision of the world and how their kids should be raised.”

We hope that doesn’t lead to disputes — but at the same time, we have to support Kim’s motherly instinct to protect her children, even if it’s from backward ideas from their father. Right?

What do YOU think of this telling quote??