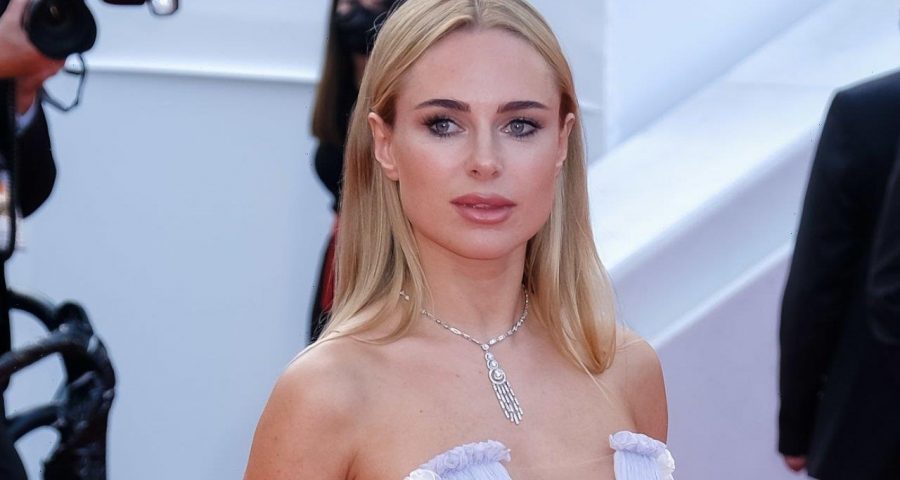 The model and former ‘Made in Chelsea’ star cheekily exposes her bottom in her daring lilac gown while posing for photographers at the premiere of ‘France’.

AceShowbiz –Kimberley Garner gave a feast for the eyes at the 2021 Cannes Film Festival. Attending the premiere of film “France” on Thursday, July 15, she flashed her bare bottom while gracing the red carpet of the prestigious event.

For the occasion, the British model turned heads in a daring lilac gown from La Metamorphose that featured chiffon pleats in lavender and cream that flared out into a full length skirt with high leg slits. As she walked through the stairs, she adjusted her skirt, giving a glimpse of her bum.

The dress also featured a triangle panel on the chest down to the navel, putting her cleavage on display. The former “Made in Chelsea” star completed her look with towering white heels and put on minimal accessory as she wore a necklace and a ring.

Also glamming up for the “France” premiere was model Stella Maxwell, who exuded elegance in a blush pink Resort 2022 maxi dress from Alberta Ferretti. The gown boasted a fitted waist, sweetheart neckline and floor-sweeping skirt.

The sleeves were slung over her shoulders for sensual vibe as she put on a maroon lipstick. Her hair was pulled on each side and styled in loose waves as she rocked a pair of dangling earrings.

Another beauty stunning on the red carpet was model Georgina Rodriguez. The girlfriend of soccer star Cristiano Ronaldo was a vision in a chocolate brown gown with a thigh-high split that showed off her toned pins. In a quirky twist, the gown was adorned with leather fringing and shoulder detailing that gave the whimsical frock an edgy touch.

“France”, originally titled “On a Half Clear Morning”, stars Lea Seydoux as a celebrity journalist juggling her busy career and personal life, but whose life is overturned by a freak car accident. The lead actress, however, was unable to attend the screening of her films at the Cannes Film Festival after testing positive for COVID-19.