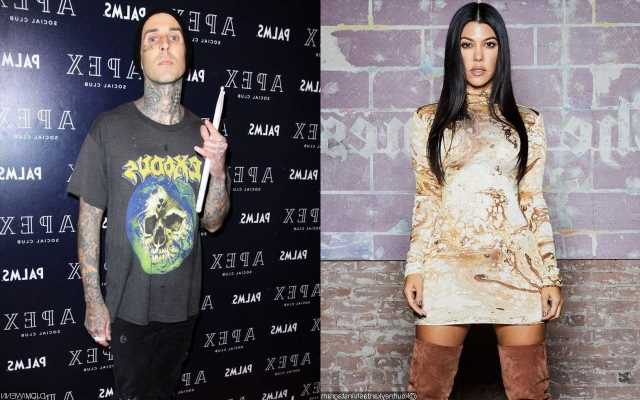 The ‘Keeping Up with the Kardashians’ star is also reportedly ‘looking forward to an epic and incredible one of a kind wedding’ with the Blink-182 drummer.

AceShowbiz –Kourtney Kardashian will accept Travis Barker‘s proposal once he decides to pop the big question. On the reason why the “Keeping Up with the Kardashians” star will “say yes,” it was reported that she is “all in” with the Blink-182 drummer.

“Since Kourtney’s life is out in the open anyways, it is an amazing feeling for her to share a love with someone that gives it right back,” a source told HollywoodLife.com. “She is in it beyond with Travis and she is all in. Once he decides to propose she is absolutely looking to say yes.”

The source also noted that the Poosh founder is “looking forward to an epic and incredible one of a kind wedding” with his musician beau. The insider went on to explain, “That is where her head space with Travis is right now. She is loving every minute of it.”

Things might be going well between Kourtney and Travis. However, it was unveiled that she and her sister Kim Kardashian were worried about Scott Disick‘s future after “Keeping Up with the Kardashians” comes to its end. “I feel like he feels like maybe as a family we’re going to be gone if we’re not scheduled to all meet up,” Kim first said in a sneak peek of the show’s Thursday (May 13) episode.

Kourtney, who shares three kids with Scott, replied, “I think it’s just change. Some people have a really hard time with change.” Kim then added, “Maybe he’s scared in this way that he feels like, ‘Well what if I have nothing to do and I get so restless and that was giving me a purpose and giving me something to do? What if I start drinking? Or what if I start this, or what if I start that?’ You know, like, I can only imagine.”

In a confessional, Kourtney elaborated, “I know that we are Scott’s only family and that he feels insecure about not being able to spend time with the whole family now that the show’s ending.” She continued, “I think he wants to make sure that we’re all going to see each other when we’re not filming and I want to make sure that he knows we will always be in each other’s lives.”