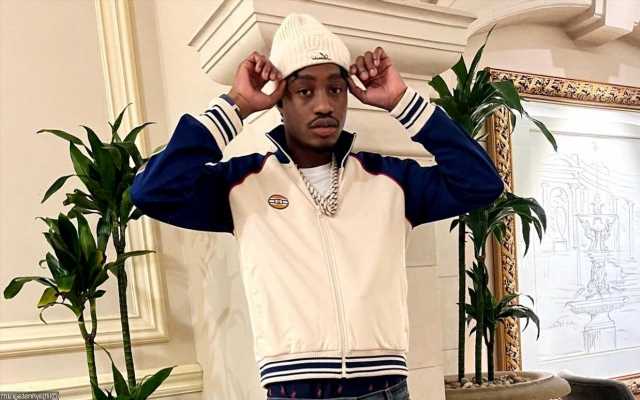 Performing in New Jersey where he was shot back in June, the ‘Calling My Phone’ spitter takes off his shirt to reveal the scars from the multiple gunshots that he suffered back then.

AceShowbiz -What doesn’t kill you makes you stronger is perhaps Lil Tjay‘s motto. Refusing to be crippled by a possible traumatizing event, the young rapper has shown how resilient he is by returning to the city where he was shot several months ago.

Last week, Lil Tjay returned to New Jersey, where he was shot multiple times in June 2022, for a performance. Taking to Instagram to share pictures from the show, he revealed his gunshot wounds in two of the snaps.

In the said images, the 21-year-old took off his shirt to show off the scars on the front of his body while performing onstage. He sported starry beige sweatpants, which he paired with a matching hoodie in two other photos. “BACK IN JERSEY,” he simply captioned the pictures.

In the comment section, people expressed their support for Lil Tjay. Tana Mongeau wrote, “love to see it!!” Another follower commented, “Love to see it bro.” A third user remarked, “Took 7 shot still here..,” while another fan shared, “The places on his side where he got shot hurts me glad he still going strong tho.”

Lil Tjay was shot seven times during an attempted robbery in Edgewater, New Jersey in the early hours of June 22. He was flown to Hackensack University Medical Center and underwent emergency surgery, while a second victim, 22-year-old Antoine Boyd, who is friends with the rapper, was also shot once and was in stable condition. Meanwhile, the shooter was also hit by gunfire, but managed to escape with help from an unidentified co-conspirator.

After spending months in the hospital, in September, a video surfaced of the Bronx native walking out of a hospital room with the help of a nurse. At the top of the clip, he wrote, “The blogs said I was paralyzed and couldn’t walk. But I started walking in a week after surgery. I beat the odds.”