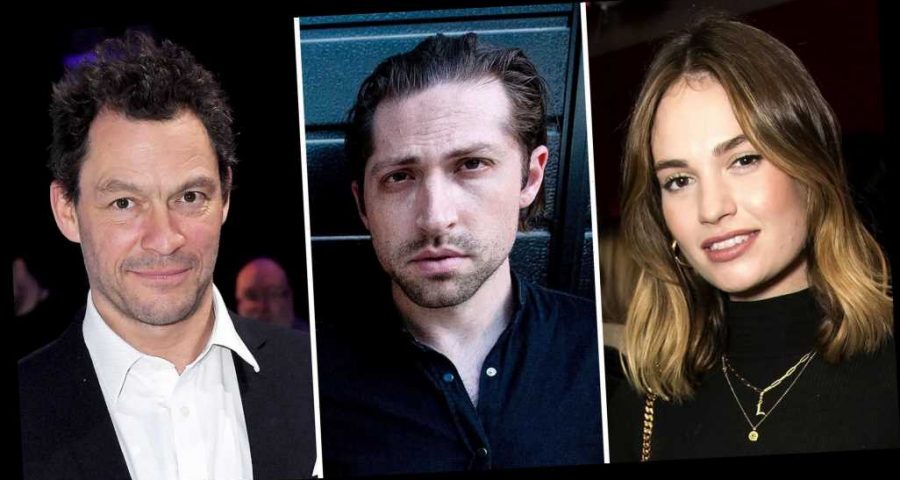 The Daily Mail reported on Friday, February 12, that the Downton Abbey alum, 31, was spotted sharing a smooch with the Queens of the Stone Age bassist, 35, one day prior while standing outside of a hotel in Suffolk, England.

The English actress and the American rocker follow each other on Instagram and are reportedly staying at the same hotel as James films What’s Love Got to Do With It?

The Cinderella star made headlines in October 2020 when photos surfaced of her packing on the PDA with West, 51. The Affair alum, who is married to Catherine FitzGerald, was seen cuddling and kissing James while in Rome.

The pair were photographed getting cozy on a scooter ride near the Spanish Steps before making out while dining al fresco.

The following day, they were spotted getting close at an airport in Rome. The costars were reportedly kissing on the plane back to the U.K. as well.

Upon his return to the England, West posed for PDA-filled photos with his wife of 10 years, FitzGerald, 49. “Our marriage is strong and we’re very much still together,” he wrote in a note to reporters one day after his photos with James broke. “Thank you.”

Dominic West’s Most Peculiar Quotes About Marriage and Affairs

The Wire alum wed the Irish landscape designer in 2010 and they share four children, Dora, 15, Senan, 13, Francis, 12, and Christabel, 5. West is also the father of Martha, 23, whom he shares with ex-girlfriend Polly Astor.

“Dominic and his wife wanted to put up a united front,” a source exclusively told Us Weekly at the time, noting that James and FitzGerald were both “horrified by the pictures.”

A second source told Us that West and James, who met on the set of the BBC drama The Pursuit of Love, “were always very flirtatious” on set.

“The way Dominic was carrying on with Lily people assumed that he was allowed to stray from his marriage,” the insider added. James has yet to comment on the scandal.

The Rebecca actress was seen with her Mamma Mia! Here We Go Again costar Dominic Cooper in London in November 2020, before being linked to Shuman this month.

The Los Angeles native alluded to having his own heartache in 2019, while promoting his band Mini Mansions’ third album, Guy Walks Into a Bar …

“The ‘dot dot dot’ in the title is important. For us humans, the first thing we do is go out in search of a partner. It could happen at a gym or a restaurant or an online dating site, but for us, it happened to be a bar,” he told the Boston Herald in May 2019. “That’s how this relationship started, and it’s how this record started as well. The album takes you through everything, and it was written in real time. The recording process lasted two years, which is how long my relationship with this woman lasted. It was a challenging process and emotionally fatiguing, but I think it made for a real and honest record.”

The War & Peace alum, for her part, was previously in a relationship with The Crown’s Matt Smith from 2014 to December 2019. She was then rumored to be dating Chris Evans but has continued to play coy about the relationship.

“No comment,” she told The Guardian in October 2020, when asked about her romance with the Captain America star, 39. “I couldn’t confess to breaking laws, you know.”